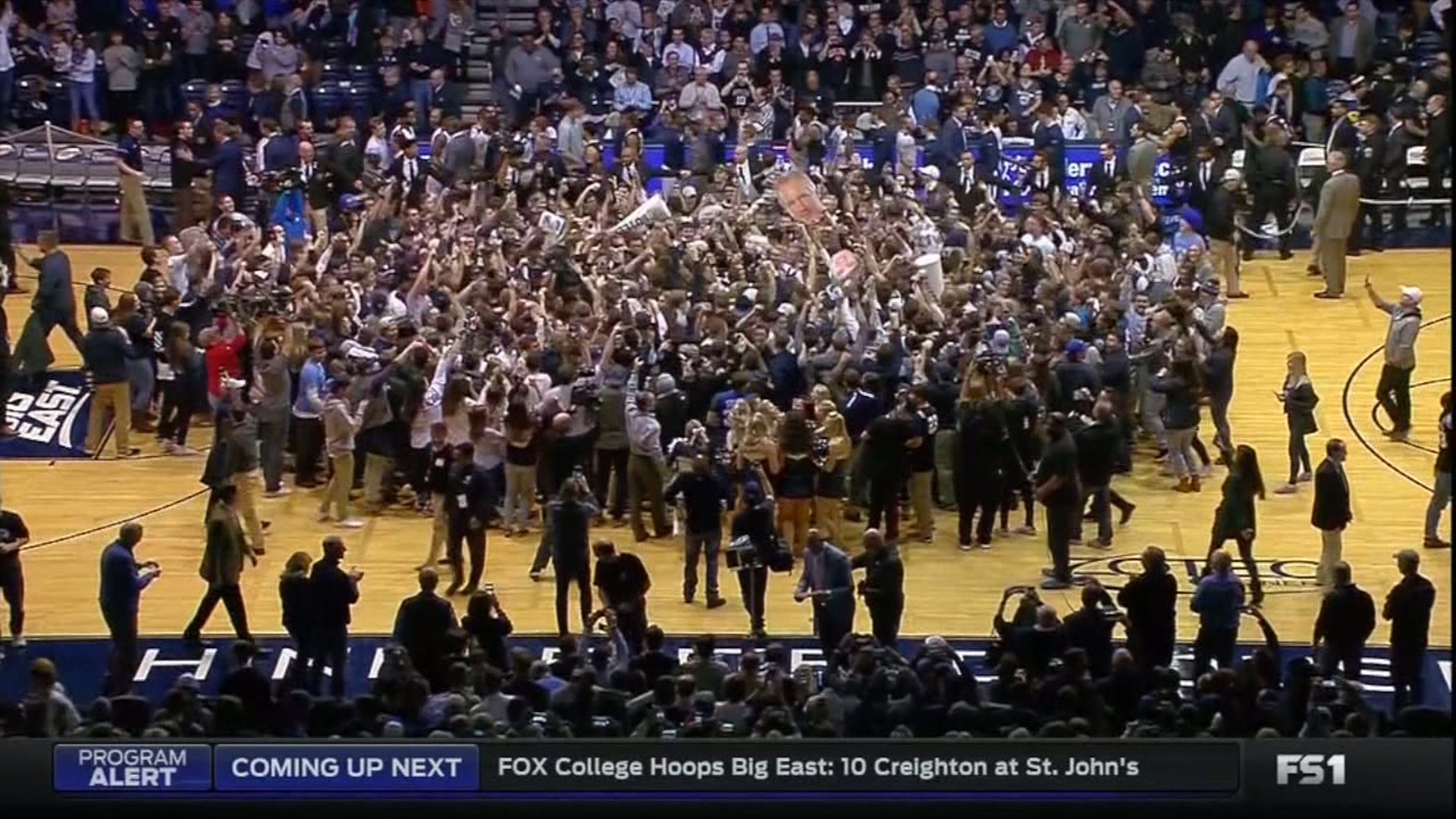 Butler students storm the court after Butler’s 101-93 upset over No. 1 Villanova on Dec. 30, 2017. The Wildcats would go on to win the National Championship and send five of its players to the NBA. Photo courtesy of FOX 59.

As the basketball seasons wind down, another senior class has made its impression on the hallowed halls of Hinkle Fieldhouse. Through the past four years, Butler basketball has had historic ups and some downs, too. Nevertheless, some of the most iconic moments in program history have happened since this senior class came to campus four years ago. We count down the top moments in Hinkle Fieldhouse in the past four years.

The opening game in the countdown comes from a game this season. The 76-73 overtime win over St. John’s is one of multiple crazy comebacks from this year’s team as the Red Storm held a 16-point lead early in the first half. Down two and without the ball, Butler gets a big-time steal from Myles Wilmoth on an inbounds pass to have a chance to send the game to overtime. Aaron Thompson capitalizes on the opportunity, making the driving layup to force the extra five minutes. According to ESPN win probability, the Bulldogs had under a 15% chance of pulling out the win before the Wilmoth steal.

This game may have been the most-anticipated matchup for Butler in some time. Florida, the No. 6 ranked team in the country in the preseason, limps into a sold-out Hinkle Fieldhouse to play a Butler team that is smelling one of its best seasons in program history. The Bulldogs take control early on in the game and never look back, extending their record to a spotless 9-0. Butler fans stand outside Hinkle Fieldhouse as early as 9 a.m. for the noon tip as Coach Jordan passes out donuts to students who waited in the December morning to cheer on their Bulldogs. The 9,303 in attendance got their money’s worth in a Butler win.

Butler is not typically a team that runs up and down the court, lighting up the scoreboard. The Bulldogs thrive in games that have a final score in the 50s, but not in January of 2018 against Marquette. Then-senior Kelan Martin explodes for a career-high 37 points, 24 of which come in the second half. Butler shoots 59% from the field, record 19 assists and only commit three turnovers in what was a clinic for offensive efficiency. Martin and Marquette forward Sam Hauser, now at University of Virginia, duel all night as Hauser records 30 points of his own in the loss. Now playing in the NBA for the Indiana Pacers, Martin definitely looked the part in this one.

Hinkle Fieldhouse in March is a different beast for opposing teams. This was the case in March 2019 when an emotional Butler group let out their frustrations on their archrival that resides 90 miles southeast. On the end of a disappointing season for the Bulldogs, Kamar Baldwin and Paul Jorgensen combine for 43 points to secure the Senior Night win. “Paulie J” hits five 3-pointers and snags a late-game steal to clinch the win for Butler.

6. Best win of the season — or so we thought

Creighton entered this game as the eighth-ranked team in the country and looked the part in stretches. At one point in the second half, the Bluejays went on a 26-3 run to turn a seven-point deficit into a 51-38 lead with less than 12 minutes to play. Unphased by the turn of events, the young Bulldogs fight all the way back, pulling out a gutsy win in overtime. Clearly resembling the “gritty not pretty” era that LaVall Jordan has claimed in his four years, the Bulldogs shoot just 37%, but are able to tone down Creighton’s high-powered offense to just 66 points in 45 minutes of play. The game was set to be the highlight of the 2021 spring until a certain game later on down the road.

This is the game that vaulted Butler to No. 5 in the AP poll, its highest national ranking to date. What made this game so impressive was the Bulldogs flexed its collective muscle to a strong performance from everyone. The win improved Butler’s record to 14-1 at the time, proving they were in the national conversation for one of the best teams in the country. A high-flying Creighton offense is limited to under 60 points and Kamar Baldwin scored all of his 20 points in the second half. While this game lacks the fireworks at the end like other submissions on this list, the dominance in this game is impressive nonetheless.

This win would be higher on the list if not for the fact that it lacked any late-game drama. The first swing in this game comes when the Bulldogs blitz the No. 8 team in the country on an 11-0 run late in the first half. Despite being the sixth-most efficient offense in the country via KenPom, the Wildcats never really pose a threat to take back the game. It’s Senior Day for Butler regulars like Aaron Thompson and Bryce Nze, but it is freshman Chuck Harris who steals the show with 20 points. This isn’t the best Villanova team Butler has defeated in the last four years, but this is probably the biggest upset on this list.

Some games are remembered for the quality of the opponent, others for their individual performances. This would be an example of the latter. Kamar Baldwin scores nine straight points in the final two and a half minutes of regulation to put the Bulldogs up three, but a Koby McEwen 3-pointer sends the game to overtime. Then, Baldwin scores nine more points in overtime to lead the Bulldogs to victory. In an all-time duel with Markus Howard, Baldwin scores 31 points in one of the most thrilling finishes in recent memory.

When the basketball schedule is released in late summer, Butler fans rush to find the games against Villanova to circle them. The Bulldogs routinely step up their game against the Big East power program, and that was certainly the case on this Wednesday night in Indianapolis. After Saddiq Bey’s 3-pointer ties the game at 76, Butler holds for the final possession. Ball in hand, Kamar Baldwin sizes up his defender, steps back from the right wing and nails the game-winning 3-pointer at the buzzer. It was the only buzzer beater in Hinkle over the last four years, but it is worth its weight in gold. An all-time moment from an all-time Bulldog.

Possibly the loudest Hinkle Fieldhouse has ever been in its 93-year existence is when Paul Jorgensen cans a 30-plus-foot 3-pointer from the logo in the upset win over No. 1 Villanova. Over time, fans tend to forget how dominant this Wildcat team was. Coming into the game, Villanova was 13-0 and would later go on to win the National Championship with a 36-4 record and send five of its players to the NBA. Not only did the Bulldogs pull off the win, they shoot 60% from the field and make two-thirds of their 3-pointers en route to a 101-point outburst in front of a sold-out Hinkle Fieldhouse.