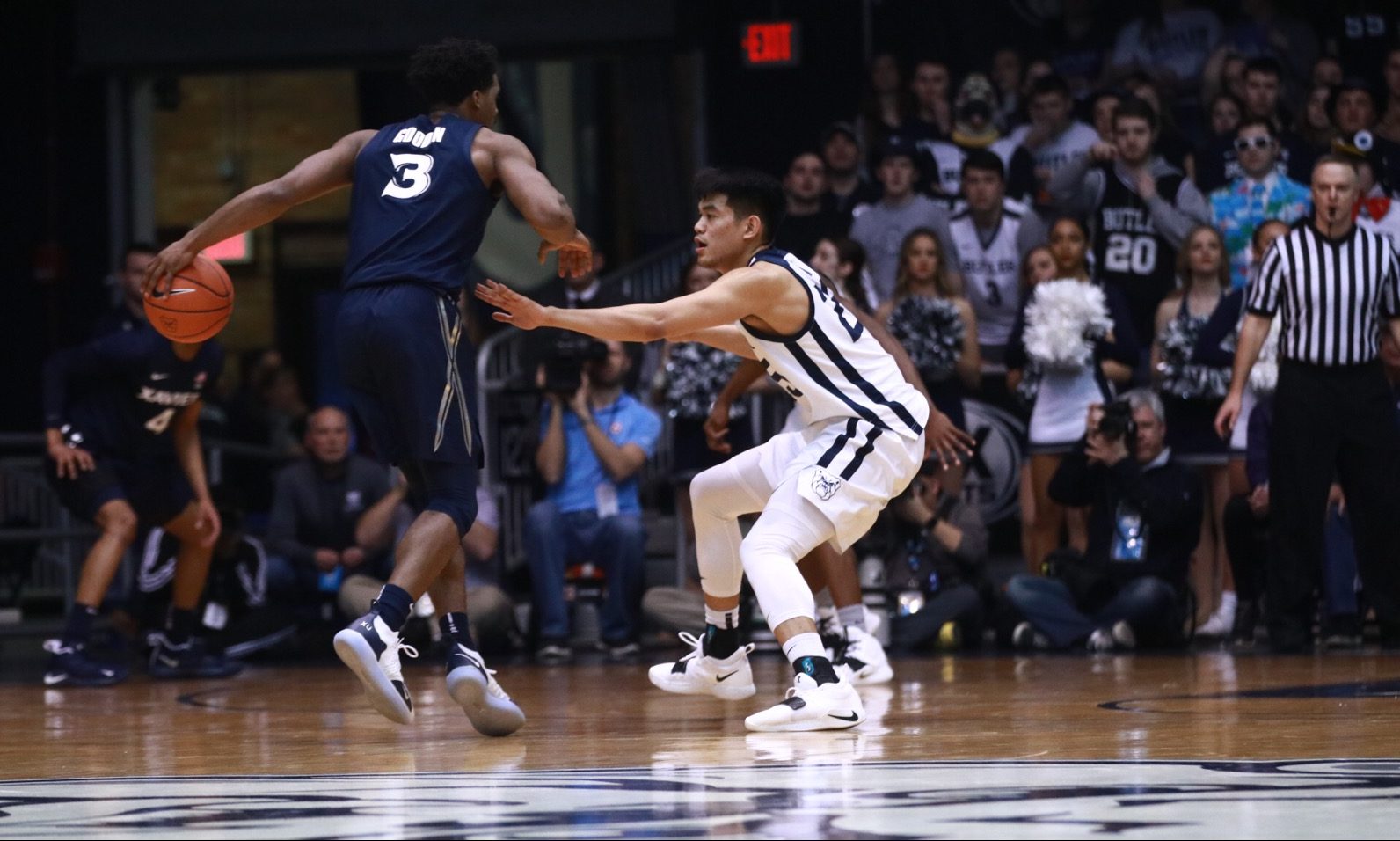 Butler’s Christian David on defense against Xavier’s Quentin Goodin. Butler moved to 16-14 on the season with the win. Photo by Jimmy Lafakis.

The Butler men’s basketball team snapped its three-game losing streak with a 71-66 win over Xavier in the Bulldogs’ final game inside Hinkle Fieldhouse. Butler ended the season 12-4 at home and sent its seniors out with a victory. Here are three takeaways from a satisfying win.

Xavier made five of its first seven shots and jumped out to a 9-2 lead thanks in large part to lackluster defense by the Bulldogs. Then, Butler locked in. The Musketeers misfired on seven of their next eight shots and went 4 minutes and 52 seconds without scoring a single point. Butler rattled off 10 straight points to take a 16-14 lead that turned into a 35-32 advantage at halftime. Xavier managed only 18 points in the final 14:56 of the first half.

Butler’s 10-3 edge in fastbreak points is a direct result of how well it guarded a the Musketeers. The Bulldogs’ offense suffers significantly when they aren’t playing defense, especially when the threes aren’t falling. Butler was able to overcome a 9-for-28 performance from deep because it forced 15 turnovers — leading to 11 points — and managed to keep the rebounding battle within two. This was the first time since Dec. 21 the Bulldogs gave up less than 67 points. This team can still play with anyone in the country, but it starts with defense.

2. Christian David is the most underappreciated player on this team.

Christain David is practically forcing LaVall Jordan to give him more minutes with performances like the one had had against Xavier. He posted a plus/minus of 10 in the first half, two points higher than any other player on either team. He blocked three shots before halftime and all three of his points came off offensive rebounds. David also dished out three assists in only 20 minutes on the floor.

His final numbers — three points, five rebounds and four assists — don’t indicate an outstanding performance on the surface. While the box score shows David contributed, it is all of the little things he does so well that make him such a valuable player. He can guard multiple positions, is a capable shooter and rebounds the basketball. It’s not an accident Butler outscored the Musketeers by seven points when he was in the game. If David can become more effective offensively, he will be one of the most important players on the Bulldogs’ roster next season.

3. Paul Jorgensen was not about to leave Hinkle quietly.

It’s only fitting that Paul Jorgensen launched a game-high 18 shots in his final game at Hinkle Fieldhouse. He finished with 19 points — the second most of any player — on 33 percent shooting while knocking down five of his 11 3-point attempts. Jorgensen looked for his shot from the opening tip and took some ill-advised ones early before settling into the flow of the game. He was absolutely crucial in making sure Butler’s intensity level never wavered. Jorgensen’s Hinkle finale was an incredibly accurate representation of his Butler career: frustrating at times, electric at others.

Butler’s two seniors — Jorgensen and Nate Fowler — combined for 26 points, six rebounds and five steals, not a bad way to go out. The Bulldogs were able to put their three-game skid behind them and play one of their most complete games of the season, which is a testament to the resolve of this team. They sure could have used that resiliency the past two games, but they will feel much better about themselves heading into their regular season finale at Providence and the Big East Tournament.