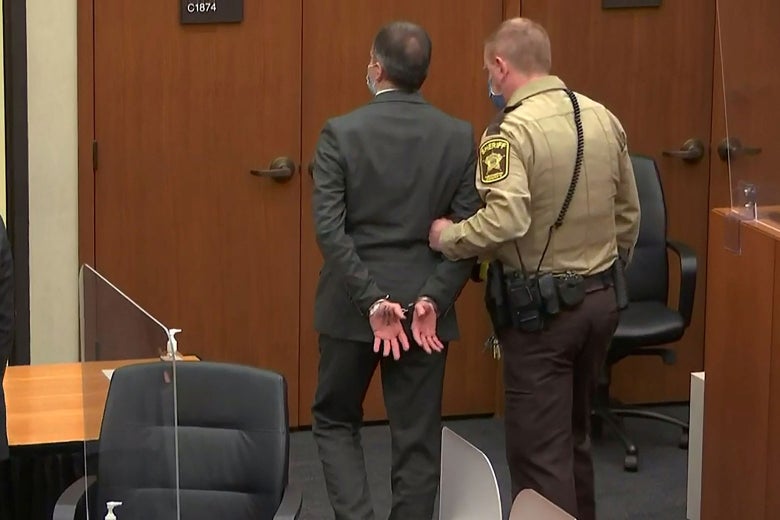 Derek Chauvin has been found guilty on all charges for the murder of George Floyd. Photo courtesy of slate.com.

Derek Chauvin, the former Minneapolis police officer who murdered George Floyd on May 25, 2020, was convicted yesterday of second-degree murder, third-degree murder and second-degree manslaughter. He faces a maximum of 75 years in prison, although he could receive a significantly lower sentence.

Since George Floyd was murdered, people across the United States and the world have been outraged. Last summer saw months of protests, the vast majority of which were peaceful — Butler students were among those who protested. The protests were not about just Floyd’s murder, but the systemic racism and flawed justice system in this country.

46-year-old Floyd was confronted by police after a convenience store employee called 911 to report that Floyd had purchased a pack of cigarettes with an alleged counterfeit $20 bill. Chauvin, along with officers Thomas Lane, J. Alexander Keung and Tuo Thao, restrained Floyd; Chauvin pinned Floyd’s neck with his knee, even after Chauvin expressed that he could not breathe, and eventually lost consciousness.

Witnesses, such as Donald Williams, a 33-year-old security guard and former wrestler, pleaded for Chauvin to ease up.

Chauvin knelt on Floyd’s neck for nine minutes and 29 seconds.

However, despite the charges which Chauvin faced, the public had reason to doubt that anything would come of the trial. In previous cases of lethal police brutality, justice was often not served. For example, Darren Wilson, the officer who killed 18-year-old Michael Brown in 2014, was never charged; similarly, the officers who were charged with beating Rodney King in 1991 received a “not guilty” verdict.

Chauvin’s trial began on March 29, 2021 in Minneapolis, Minn. It was the first time a court case was aired on live television in the state of Minnesota, with Court TV granting nationwide access to the high profile trial. Despite this, some of the witnesses in the case were unable to be shown on camera while testifying, as many were minors — one witness of the murder was nine years old, while two others were 17 years old.

Among Chauvin’s defenses were that Chauvin acted within the bounds of normal policing, and that the physical restraint was not a contributing factor in Floyd’s death. They referenced the drugs in his system and an underlying heart disease as the driving forces in his death.

The prosecutors said that Chauvin did not act within the bounds of normal policing, and that the physical restraint was a contributing factor in Floyd’s death. They said that he complied with police officers’ commands, while Chauvin used unreasonable force, despite several urges from Floyd and witnesses to ease up.

The demographics of the jury in the Derek Chauvin trial. Photo courtesy of the BBC.

After only 10 hours of deliberation, the jury reached a verdict — an unusually quick decision. Judge Peter Cahill asked the jurors to read the verdict to the court just after 4:00 p.m CT.

“Today we feel a sigh of relief, still, it cannot take away the pain. A measure of justice isn’t the same as equal justice,” Vice President Kamala Harris said. “This verdict brings us a step closer, and the fact is, we still have work to do. We still must reform the system.”

Floyd’s family, too, spoke of their feelings after the verdict was announced. His brother, Terrence Floyd, spoke at a press conference after the conviction.

“I am grateful that my grandmother, my mother, my aunts, they got to see this history made,” Terrence Floyd said. “Every day of my life I will salute [George Floyd]. I will miss him, but now I know he is in history.”