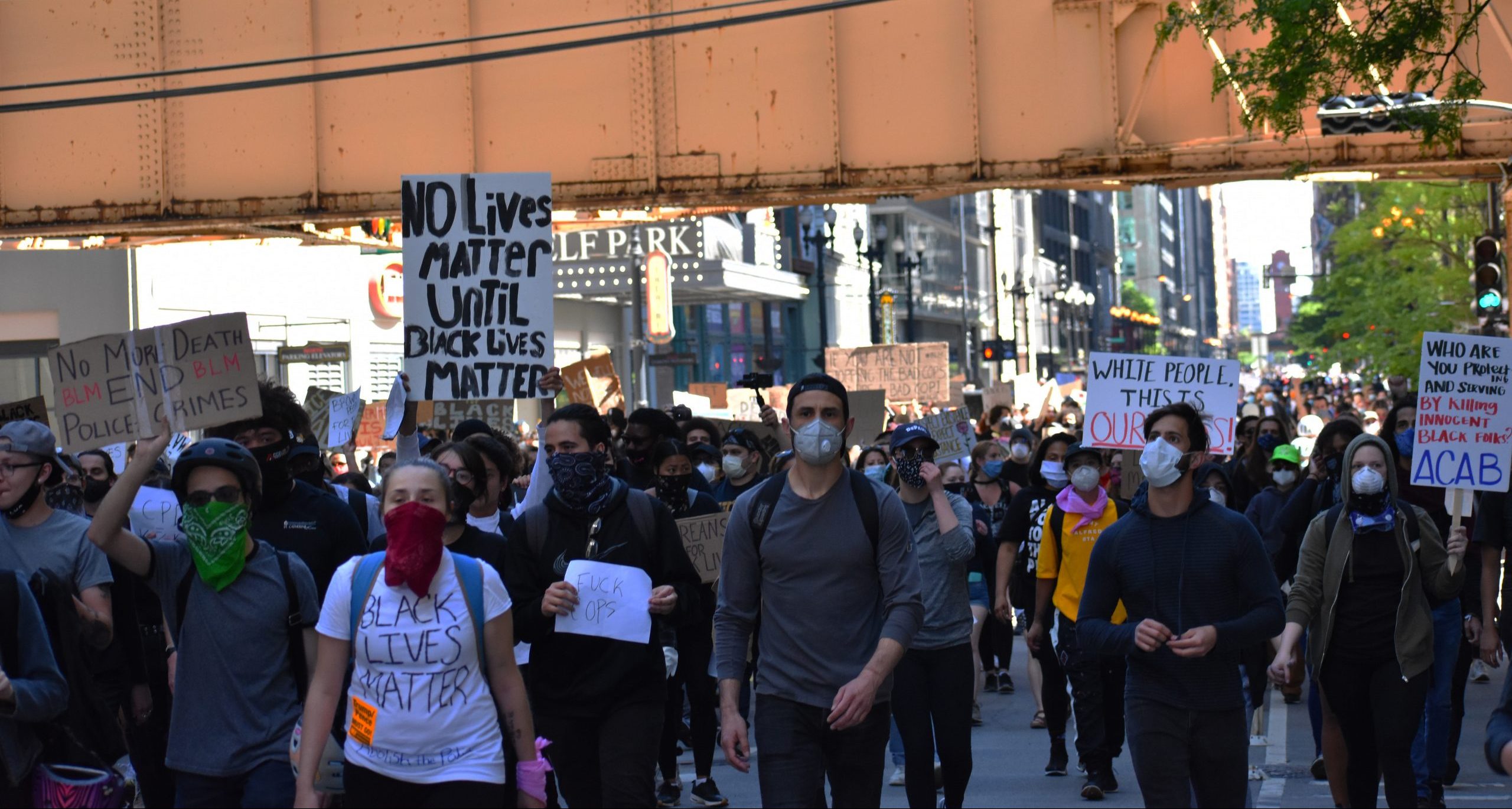 Black Lives Matter protests have occurred in cities around the country, including this one in Chicago. Photo by Donald Crocker.

In the past few weeks, there have been countless protests in U.S. cities sparked by the murder of George Floyd. The Butler Collegian reached out to Butler students and Collegian reporters who have protested to write about their experiences. Here are their written accounts of protesting for racial justice. This article will be updated as more accounts are received.

I had never been to a real protest before. We had one during my senior year of high school after some kids decided it was a good idea to wear blackface, but that’s a story for another time.

May 30 was going to be my first real protest. It gave me the chance to be outspoken about something I’m deeply passionate about: the Black Lives Matter movement. The protest happened just five days after George Floyd was brutally murdered by the Minneapolis Police Department.

Having grown up on the outskirts of Chicago, I knew I had to use my voice. I figured I’d take some pictures along the way just for the heck of it. Originally, I went to the protest by myself, but I had some friends, Justin Cosby and Jehan Patterson, who were also there. I knew I could meet up with them later if things got dangerous.

Less than an hour into my first real protest, the Chicago Police Department made their first arrest. I had no idea what happened. All I saw was a black man with glasses and a red beanie, maybe five years older than me, being detained.

At a later protest on June 6, I would see the man in the red beanie, Micah L. Butler, again as he spoke in front of hundreds of people and shared the story of his arrest.  He came to the previous protest to take pictures, just like me, and was arrested while trying to help another protester who was being detained by the police. One thing led to another and he found himself being detained for 12 hours.

And that’s when it hit me. That could’ve been me. What if I was just a few hundred feet ahead and I was in his shoes? At that point in the protest, I was alone.

Who would’ve called my parents? How long until I would’ve gotten home? Would this go on my record? Could this hinder future job opportunities for me? Would I be able to go back to college? All these questions and so many more popped in my head as I watched Micah speak.

But, let’s get back to my first real protest. It started at 2 p.m. Some people spoke and we probably began walking around 2:15 p.m. The video I recorded of Micah being arrested was logged at 2:41 p.m. Great way to start your first protest, right?

Let’s fast forward a bit to about 8 p.m. At this point, Chicago mayor Lori Lightfoot announced a curfew from 9 p.m.-6 a.m., and I figured I’d text my friends to meet up with them. Luckily, they were really close and we decided to stay together to protest.

At about 9 p.m., Justin was brutally beaten and strangled by numerous Chicago police officers.

After the police beat Justin to the point where he couldn’t walk on his own, about 30 officers surrounded him and a few of them tried to put zip ties around his wrists. After that, they took him away.

To me, the worst part was the police officer’s reactions. I stood there screaming every expletive in the book, all while on the brink of tears. And they just stood there with straight faces, like beating up a 19-year-old kid and carrying him away was routine for them. It was truly disgusting.

All of this at my first real protest.

Jehan and I were in shock. We didn’t know what to do. Justin didn’t have his phone. Eventually, we got in contact with his brother and then with his parents. At about 11:30 p.m., we decided it was best to head home and continue the search in the morning.

Justin was detained for 31 hours. 31 hours. He told me he had to beg for hours just to use the bathroom or to get medical attention. He screamed for hours for food and water. For 31 hours, we had no idea where he was. Thanks to the innumerable people who helped through social media, Justin made it home to his family.

Some may wonder, “Donald, after all that, why would you still go to protests? Aren’t you scared?” Of course I’m scared. But that’s all the more reason to keep going. Stories like Micah’s and Justin’s are exactly why I cannot and will not stop.

And that’s why I can’t stop. That’s why I won’t stop. So, yeah my first real protest experience wasn’t the best, but it showed me there’s hope.

People of all religions, ages, ethnicities, races and sexual orientations came together at the Chicago protests. We all came together as one. You all have seen the headlines, the protests are worldwide. That gives me hope for a better tomorrow.

If we can make this movement last, I truly believe we can bring about real change. In the last two weeks of protests, we’ve already done so much.

But we’re not done yet. We can’t be satisfied. We have to keep pushing. We have to.

I attended a Black Lives Matter protest in my city, St. Louis, Missouri. It was extremely peaceful and powerful. I went because I stand with the black people in this country who have to face injustices every single day.

If anyone is able to attend a protest in their city, get out there and use your voice to demand change. And even if you’re not out in the streets, you should be having important conversations with people around you and working to educate yourself more and more every day.

Those of us who have the privilege to ignore this movement are the ones who need to be supporting it the most.

Don’t sit back and be silent. Black lives matter, period.

Marching with my city of Indianapolis connects me to the nation at large, where I become more than a fellow citizen, but a brother to every person who feels the pain or can empathize with the black community. It’s a powerful connection to feel like there are people out there who are one with each other for social justice, especially during quarantine.

The wave of protests that began with George Floyd’s death is not a new phenomenon. Americans have been protesting the social injustices experienced by black people for decades, even before the days of Martin Luther King Jr. The recent murders of unarmed black men and the death of George Floyd are only the tipping point for many Americans to join the Black Lives Matter movement.

Now that it is our turn to bear the torch, we cannot falter. We have no choice but to take it the rest of the way.

We won’t cease protests until we see lasting change in both the police and our elected government officials. These protests have had the fortunate side effect of exposing threats to our constitutional freedoms.

If America is not careful in these momentous times, we will slip under the iron thumb of our government. Keep up with the news, stay in touch and carry the torch.