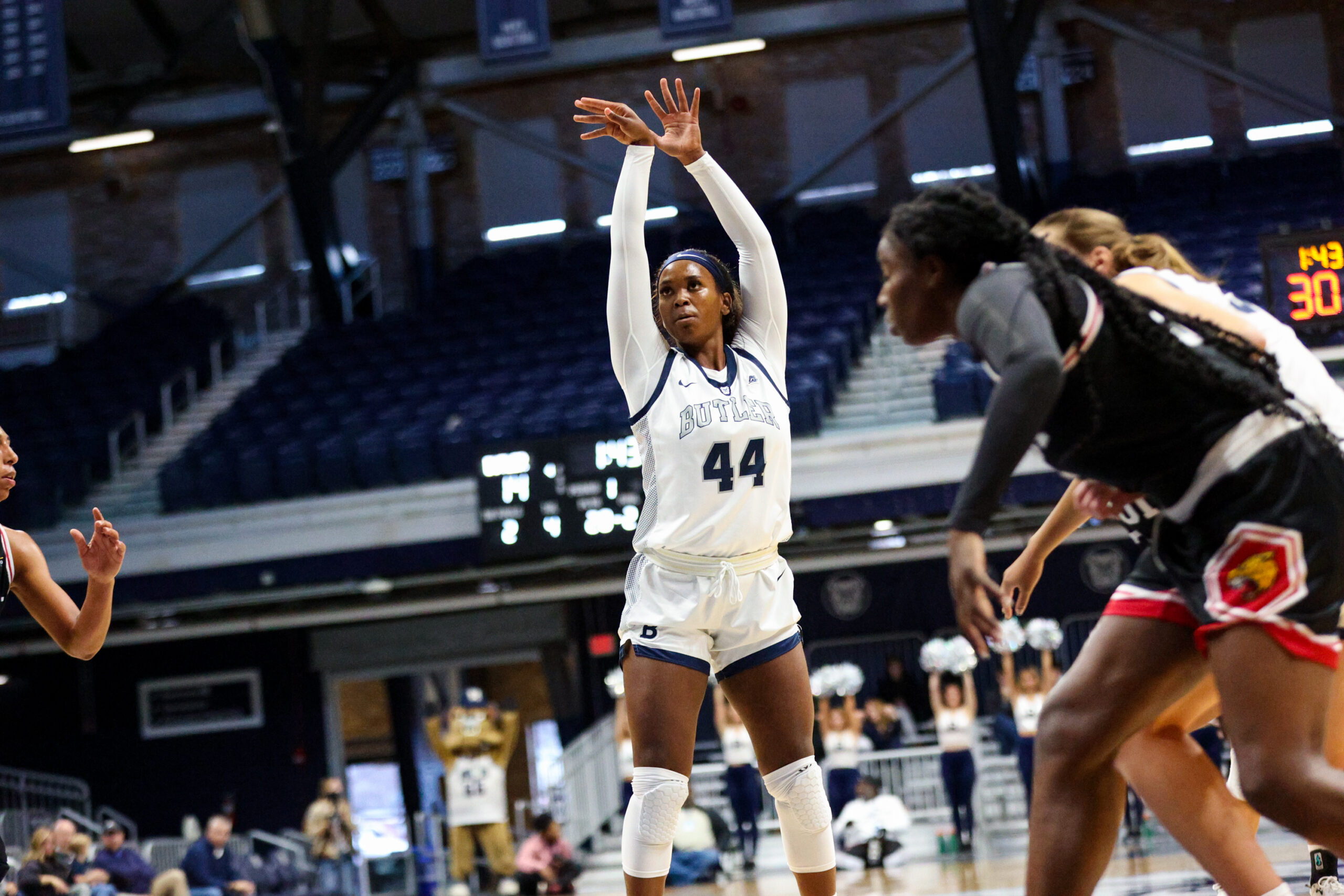 Graduate student forward Kelsy Taylor shoots a free throw in the loss to IUPUI on Nov. 13. Photo by Claire Runkel.

The Butler women’s swim team will travel down the road to IUPUI to compete in the annual House of Champions swim meet. When Butler last competed against IUPUI on Oct. 14, 20 swimmers recorded 35 Big East qualifying times, the most ever in a single day event. The meet will span three days, ending on Sat. Nov. 19.

Butler women’s basketball travels to Ball State for their third game of the season. The team is off to a 1-1 start, suffering a loss in a close battle to IUPUI on Nov. 13. The game will begin at 2 p.m.

The men’s basketball team plays their third game of the year at Hinkle Fieldhouse against Saint Francis of Pennsylvania. The Bulldogs are 1-1 so far this season, most recently losing on the road to Penn State. The game will begin at 6:30 p.m. and will be airing on FS2.

Butler women’s volleyball will return to Hinkle to take on the Providence Friars. The Bulldogs are coming off a stretch of four consecutive road games, going 2-2 in that stretch. The game is set for a noon start and will be aired on FloSports/Butler+.

Butler women’s swim will compete in day two of the House of Champions swim meet.

Redshirt senior Mia Beckham will represent Butler in the NCAA Championships after earning an individual bid on Nov. 12. Beckham recently placed 17th with a time of 20:19.8 at the NCAA Great Lakes Regional meet on Nov. 11. The NCAA Championship will be held at Oklahoma State University in Stillwater, Oklahoma. Races start at 9 a.m. CT.

Butler men’s cross country will also travel to Stillwater, Oklahoma to compete in the NCAA Championships, earning an at-large bid on Nov. 12. The men’s team has had a great season, recently coming off a fourth-place finish out of 29 teams in the NCAA Great Lakes Regionals. Races will also begin at 9 a.m. CT.

Butler football will take on the St.Thomas Tommies at the Sellick Bowl for their final home game of the regular season. The Bulldogs have had an improbable season under first-year head coach Mike Uremovich, going 7-3 in their first 10 games. Butler gets a huge test on Saturday against the top-ranked team in the Pioneer League. A win against the Tommies could bolster Butler’s resume and give them a better chance for an at-large bid in the FCS playoffs. The game will begin at 12 p.m. and will be streamed on FloSports/Butler+.

Butler women’s swim will compete in the third and final day of the House of Champions swim meet.

Men’s basketball vs. The Citadel

Butler men’s basketball will cap off a full day of Butler athletics on Nov. 19 with a 7 p.m. tipoff vs. The Citadel at Hinkle Fieldhouse. It will be their final game before heading to the Bahamas for the Battle 4 Atlantis tournament, which begins on Nov. 23. The game can be watched on FS2.

The Bulldogs will take on UConn for their final game of Big East regular season play at Hinkle Fieldhouse at 1 p.m. The Huskies defeated Butler 3-0 in their previous matchup on Oct. 21. This game can be streamed through FloSports/BEDN.

The Butler women’s basketball team will host Tennessee State at 7 p.m. at Hinkle Fieldhouse. The last time the Bulldogs and Tigers faced off was in 2007 — Butler won that game 72-62. The game will be streamed live on FloSports/Butler+.