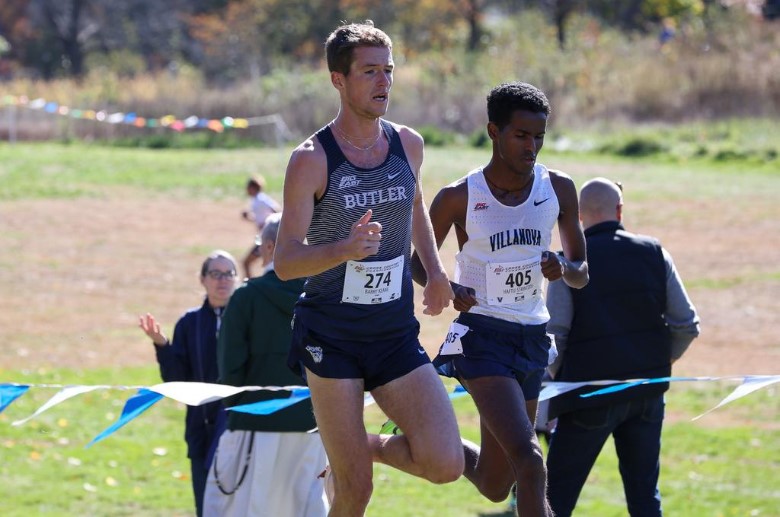 Butler’s men and women cross country teams traveled to Terre Haute, Ind. to run in the NCAA Great Lakes Regional. This race was the qualifying race for the 2022 NCAA Cross Country Championships.

For the men’s 10k race, Butler graduate student Barry Keane won with a time of 29:38.1. Keane was followed by teammate and redshirt sophomore Jesse Hamlin who ran a time of 29:50.9 to finish in second place.

Head Coach Matt Roe was pleased with the effort of his men’s team and was hopeful the team would advance.

“Our response from conference was exactly what I hoped for,” Roe said. “ We were right there with a few of the top teams in the NCAA, and we raced like a Top 25 program. We will see if it’s enough to get to Stillwater.”

With their finishes, Keane and Hamlin became automatic qualifiers for the 2022 NCAA Cross Country Championships. The Bulldogs finished fourth place as a team and will have to wait until Saturday at 5 p.m. to see if they will be chosen to race in the championship meet.

The women’s race was a 6k race and the team was led by redshirt senior Mia Beckham who finished in 17th place with a time of 20:19.6. Redshirt sophomore Abby Olson was the next finisher for the Bulldogs and crossed the line with a time of 21:11.9

The next three finishers were in the 21-minute range with sophomore Ashlyn Minton finishing 62nd and running a time of 21:28.2. Redshirt sophomore Katherine Olsen placed 68th with a 21:38.1 and redshirt sophomore Morgan Werner placed 70th with a run of 21:46.1.

Rounding out the Bulldog finishers were redshirt freshman Lexi Affolter in 112th place with a time of 22:22.2 and redshirt sophomore Abby Fostveit finished 123rd by running a 22:32.1.

Roe also discussed the efforts of his women’s team and how they ended their season.

“Our women achieved the best possible outcome today,” Roe said. “They raced tough and executed well. It was a great way to end the season as a team.”

The women’s team placed eighth out of 31 teams in the field and Beckham has a chance to be the lone runner for the Bulldogs in the championship field.

After the men and women’s fields have been announced, the teams and individual runners will head to Stillwater, Okla. to run in the 2022 NCAA Cross Country Championships on Saturday, Nov. 19.