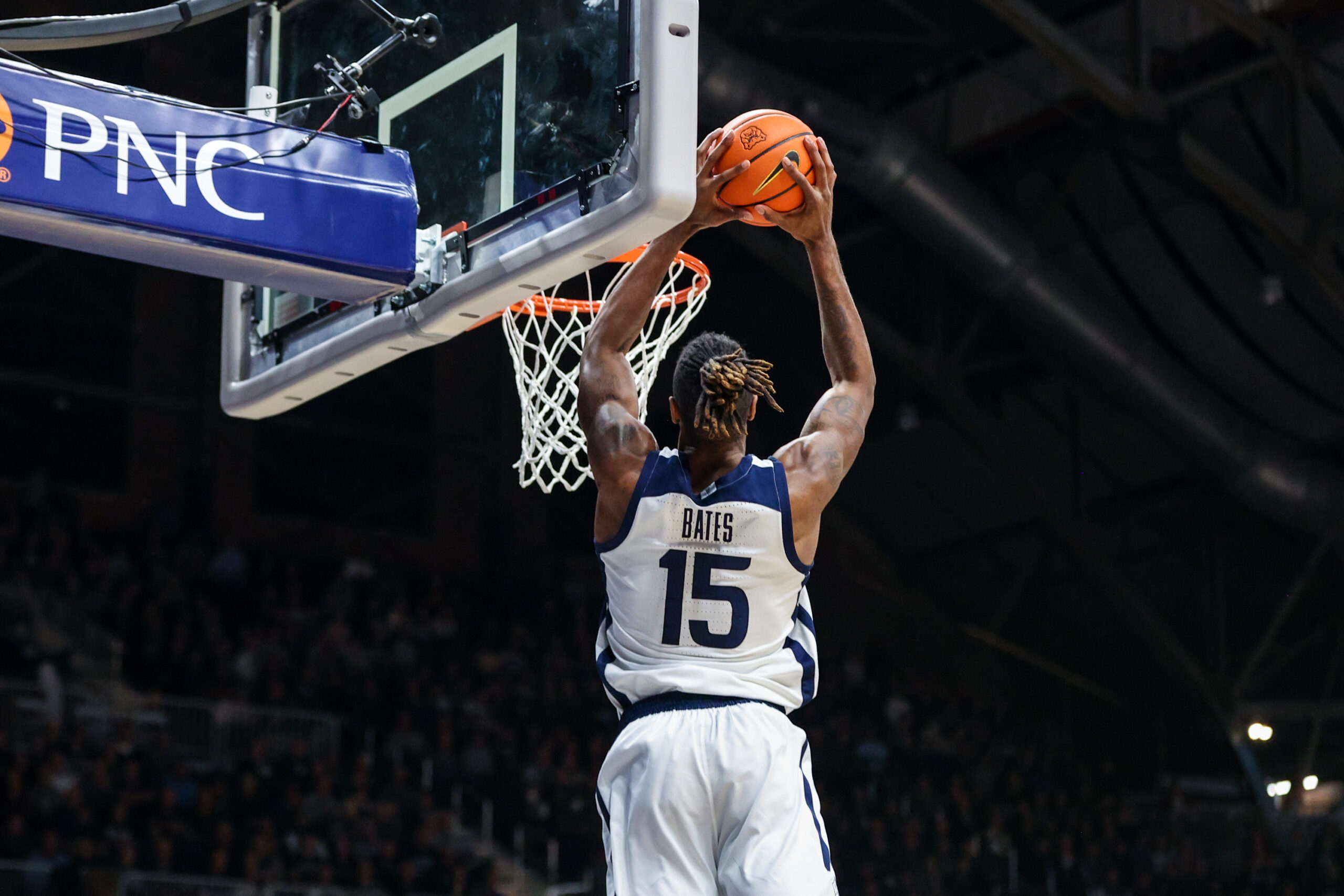 Butler men’s basketball suffered their first defeat of the season with a 68-62 loss at Penn State. Graduate student center Manny Bates continued his strong play with another double-double in the game. Bates led all scorers in points with 16 while also contributing 10 rebounds and three blocks on the night.

For Penn State, guard Jalen Pickett secured the second triple-double in Nittany Lions history. Pickett scored 15 points, collected 10 rebounds and dished out 11 assists to help the Nittany Lions remain undefeated on the season. Guards Andrew Funk and Camren Wynter each chipped in 11 points and guard Seth Lundy added 10 points to round out the double-figure scorers. Let’s go beyond the box score to assess the Dawgs’ first road loss.

Coming into this game, Penn State was shooting a blistering 50% from long distance and a key for the Bulldogs was to try to limit their chances from distance. Early on in the first half, the Nittany Lions hit three of their first five shots from behind the arc. After the under-12 minute media timeout, the Bulldogs held the Nittany Lions to 2-8 shooting and were more active in closing out to open shooters and forcing more difficult shots. As a result, Penn State shot under 40% from the field and were limited to two free throw attempts in the first half.

In the second half, Butler’s defense outside of the paint was exploited and Penn State made 14-26 field goal attempts including 5-11 from the three-point line. Outside of their shooting, Butler made Penn State work by forcing 11 turnovers and had nine steals in the game. It is a credit to the Bulldogs’ overall defensive effort that they were able to hang in the game for the full 40 minutes.

It appeared that the defensive miscues that cost the Bulldogs were miscommunications on screens which led to some of the open three-point shots. This can be a simple case of watching film and learning from mistakes to prevent teams from having three-point barrages at the Dawgs’ expense. The defense was a positive tonight and has some improvements to make heading into the next game, but was not the reason the team lost.

Where is the shooting?

From the field, Butler shot 34.3% — which was buoyed by Bates’ 8-12 shooting from the field. If you take out his performance, the rest of the team was 27% from the field. The inside-out game is the way this team is built to win. So far, the inside game has been working well and Bates has been dominating in the paint. The outside game has yet to make an appearance this season.

Granted, it is the second game of the season and patience is needed but these first two games have shown troubling signs of an inability to knock down shots. So far, Butler has shot 19% from three-point range. Last season, the team shot 30% from distance, so some positive regression is expected.

Harris, graduate student guard Eric Hunter Jr. and Lukosius are talented and have the ability to hit shots. They have seen plenty of open looks but shots have not fallen to this point. Once shots do start to fall, this team will have their offensive identity and will be difficult for opposing teams to defend. Give it a few more games and those shooting percentages should start to look better.

Butler will have to shake this loss off quickly before their next game. The Bulldogs will take on Saint Francis at Hinkle Fieldhouse on Nov. 17. There have been no updates on senior forward Ali Ali or junior forward Myles Wilmoth, so expect them to once again be unavailable.

For the Red Flash, they are coming off an 80-77 loss to Cornell and are 1-2 on the season. They are led by forward Josh Cohen, who is averaging 18.7 points per game. Behind Cohen is guard/forward Maxwell Land, who averages 16.7 points per game. Both Cohen, Land and guard Landon Moore will be players to keep an eye on for Saint Francis.