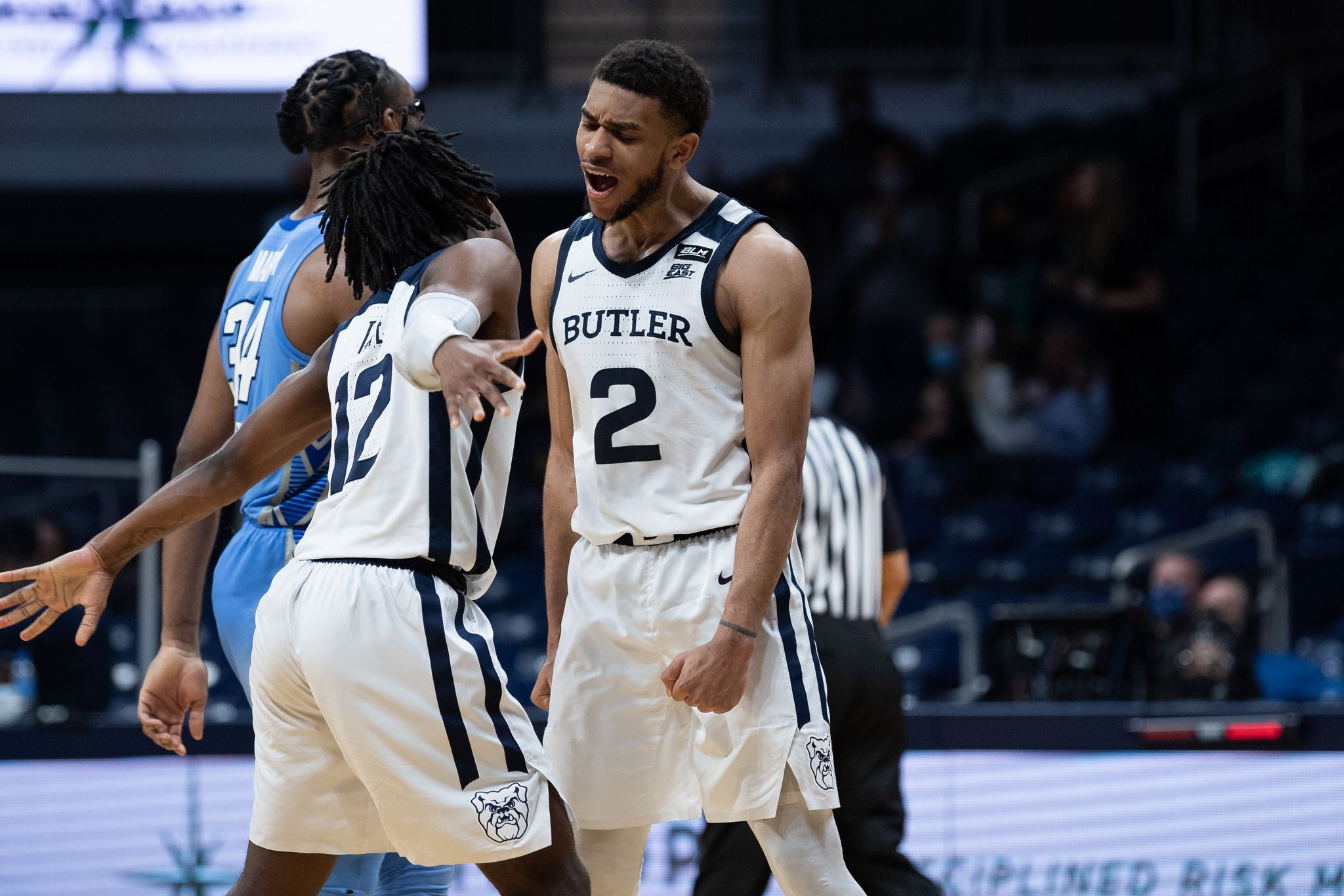 Aaron Thompson and Myles Tate celebrate a big play in Butler’s 70-66 overtime win over No. 8 Creighton on Jan. 16. Thompson recorded a team-high 17 points and six assists in the upset victory. Photo by Zach Bolinger.

Four players scored in double figures for the Butler men’s basketball team in their 70-66 upset victory in overtime over No. 8 Creighton on Jan. 16. The Bulldogs improve to 4-7 on the season following a gutsy performance from freshmen and veterans alike. Despite being down to eight scholarship players with Markeese Hastings taking a pause from the program for personal reasons and Denzel Mahoney scoring a game-high 29 points, Butler pulled out the win. We go beyond the score in the monumental victory.

1. Aaron Thompson is the heart and soul of this group

When Butler plays some of the elite-level competition in the Big East — like Creighton —, all of the Bulldogs’ best players have to be on their A-game. While Butler fans have lauded all year about the confidence and stellar play of this year’s freshmen class, it’s the experienced players that step up in the biggest moments in college basketball. In a season-high 41 minutes, Aaron Thompson scored 17 points, dished out six assists and locked down Mahoney once Butler made the switch on Creighton’s star guard.

The Bluejays flexed their proverbial offensive muscle in a stretch in the second half, going on an astonishing 26-3 run over the course of nine minutes in the early second half to erase a 10-point deficit and open up a 13-point lead over Butler. Mahoney had his fingerprints all over this run, going on a personal 12-1 run over the Bulldogs during one stretch. However, Coach LaVall Jordan made the switch to have Thompson pick up the hot-handed Mahoney, Creighton scored just one field goal in the final 11 minutes of regulation. Bryce Nze joined in on the senior fun with 15 points on the afternoon, drawing a team-high eight fouls against the Bluejay defense. At the game’s most critical moments, Thompson and Nze’s experience allowed them to will Butler to its biggest victory of the season.

2. After some uninspiring efforts this past week, Butler looked hungry for this win.

It would be a far overstatement to say that the Bulldogs were coming into this game with any ounce of momentum on their side. The short-handed group looked defeated in double-digit losses versus UConn on Jan. 9 and at St. John’s Jan. 12. Nevertheless, Butler looked more inspired and focused than ever to put a highlight-worthy win on their record in 2021. The Bulldogs committed just seven turnovers in 45 minutes, which was less than their number of offensive rebounds — 11 — against a much bigger Creighton team.

And perhaps most impressive of all was the way freshmen stepped up in big moments down the stretch against one of the top teams in the country. Myles Tate chipped in 15 points, 10 rebounds and zero turnovers to pair with a game-changing basket toward the end of overtime. While Chuck Harris didn’t light up the stat sheet, he played in big minutes down the stretch and knocked down a free throw that turned a vulnerable three-point lead into a much-more-comfortable four-point lead. And the most impressive of all the unsung heroes was freshman forward Myles Wilmoth, who stepped right into a perimeter jumper to tie the game at 60 in the waning seconds of regulation. Wilmoth replaced Bryce Golden for nearly the entirety of the late-game possessions. With the mix of veteran leadership and underclassmen confidence, the Bulldogs disproved those who said that this season was a waste and competed for 40 minutes with a team that will likely find itself in the second weekend of the NCAA Tournament.

3. “I want to do whatever it takes to win… that’s what seniors do.”

If the Butler Way and Coach Jordan’s “gritty not pretty” mantra needed one game to sum everything up, this would be the game. It certainly was not Butler’s cleanest game of the year — Butler missed 40 shots in the game, nine free throws and allowed Creighton’s leading scorer to blow up for his season-high. But amongst all of the learning points this game were contributions all up and down this short-handed bunch. John-Michael Mulloy played arguably his best six minutes of the season, while Jair Bolden played admirable defense against Mitch Ballock, who scored two points on 0-for-6 shooting.

Six players played more than 25 minutes, three surpassing the forty-minute mark. After the game, seniors Nze and Thompson simplified their efforts to what was needed to be done to win the game. “That’s what seniors do,” Nze said. “I like the big games. I like the big moments. That’s what I signed up for,” Tate said after the game. No matter the justifiable reasons for being 3-7 on the season and enduring one of the most difficult seasons off the court, Butler put their head down and played to their level of expectations.

In the COVID world, very little seems to be like what it used to. However, Saturday’s upset win over No. 8 Creighton was by far the most electric, most entertaining and most Hinkle-esque game since the dawn of the pandemic. The likes of Martin, Baldwin and McDermott have since moved on from the hallowed halls of Hinkle, but the energy and spirit of the Butler program was in the air for tonight’s win. Forget the 4-7 record and the eight-place ranking in-conference, Saturday was a reflection of Butler’s past and a likely Butler future.