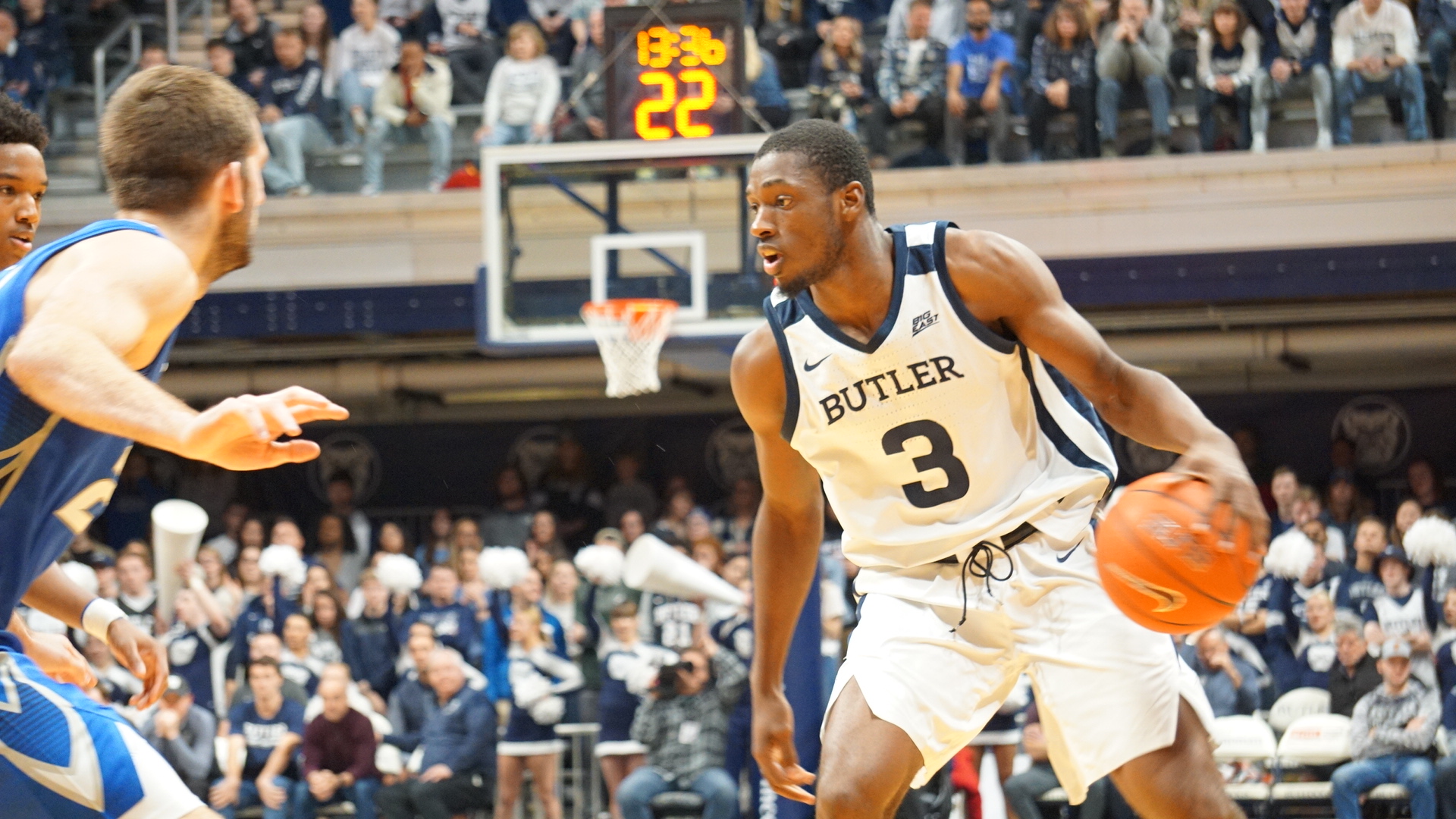 Kamar Baldwin makes a move against Creighton on Jan. 4. Baldwin scored all 20 of his points in the second half. Photo by Becca Atchley

It wasn’t as strenuous as the Big East opener against St. John’s, but it was the same result. On Jan. 4, the Butler men’s basketball team defeated the Creighton Bluejays 71-57 and are now 14-1 record and 2-0 to start to Big East play.

Butler’s defense kept the Creighton trio of Marcus Zegarowski, TyShon Alexander and Mitch Ballock in check. The core of the Bluejays offense combined for just 10-of-23 shooting, knocking down just four threes combined. After scoring 12 points in the first half, Zegarowski took, and missed, just one shot in the second 20 minutes.

Butler took an 8-6 lead with 13:55 left in the first half and never gave it up, leading by as many as 17 in the closing seconds of the game. The Bluejays threatened at points in the second half but Butler held off any momentum Creighton got. We go beyond the box score of a game the Bulldogs controlled for almost all 40 minutes.

1. Sean McDermott was on display, and Kamar Baldwin bounced back from a rough first half.

It wasn’t Sean McDermott’s most prolific offensive game of the year, but it was the most complete game the redshirt senior has played this season. McDermott finished with 18 points on 7-of-11 shooting and also pulled down 11 rebounds. The double-double is his second in as many games and his offensive arsenal was on full display. McDermott began the game with two dribble drive, stepback and then a couple moments later received a backdoor pass and also knocked down a stepback three. The senior is much more than a spot-up shooter and has also greatly improved both on the defensive end and on the glass.

From an efficiency standpoint, the senior is one of the most efficient players in the country. According to KenPom, McDermott has the eighth-best effective field goal percentage in the country. Essentially, the stat differs from traditional field goal percentage by taking into account the extra value of a made 3-pointer. He is shooting 76.5% from 2-point range, fifth in the country, and is shooting just under 45% from beyond the arc. McDermott is a model of efficiency, and he was just that today.

Kamar Baldwin, on the other hand, was the mark of inefficiency in the first half. Baldwin was 0-for-9 in the first half with two turnovers. In the second half, he found his footing, scoring all 20 of his points on 7-of-13 shooting. After a three-game stumble, Baldwin had a really good first half against St. John’s and a great second half against Creighton. As long as he remains healthy, he should continue to get back to vintage Baldwin as conference play progresses.

Butler’s leaders were big time in this one.

Butler was going to be tested in this one by Creighton’s perimeter players. They answered the call on that front and clearly had an advantage on the interior. The Bulldogs won the rebounding battle on all fronts — total, defensive and offensive — and outscored the Bluejays in the paint. The rebounding effort came from all corners of the court, McDermott led the team with 11 boards followed by three other players with four or more.

After a really poor game at St. John’s, Jordan Tucker had a +13 plus/minus, finishing with five rebounds and two assists along with a pair of threes. Butler’s interior presence on both ends of the floor has been so consistent and is a big reason why the Bulldogs have a top 5 defense in the country.

Derrik Smits showed flashes of how much of an asset he can be for Butler in conference play. Credit to Greg McDermott and Creighton for adjusting, but Smits has the ability to be a very crucial part of the Bulldogs’ bench production. When he’s 1-on-1 on the block against anyone smaller than him — everyone is — he is very effective. Foul trouble plagued him a little bit, but six points on 3-of-5 shooting don’t do justice to the potential he flashed on the interior.

3. Butler controlled the last 10 minutes due to great defense and timely shots.

You’d be hard-pressed to find an offensive threat that the Bulldogs haven’t contained yet. There probably isn’t a backcourt in the country with the raw shooting power of Creighton. Zegarowski, Ballock and Alexander have the ability to shoot at a level that they are impossible to stop. Butler never gave them a chance to take the lead or run away with the game because their defense was lockdown once again.

The Bulldogs now boast the 4th-best defense according to KenPom, and yet another team failed to score 60 points — the Bluejays average just under 80. Through two Big East games, Butler is far and away the best defensive team and they are holding opponents to just 18% from beyond the arc.

Butler’s defense has been particularly solid late in games in Big East play. Despite the breakdown in the second half against St. John’s, the defense was on another level in the last two minutes. The same can be said about the win over Creighton. With eight minutes left, the score was 53-48. The Bluejays scored just nine points after that including a garbage time three from Alexander with 17 seconds left. That coupled with 18 points from Butler in the same amount of time resulted in the Bulldogs completely controlling the game on both ends in the final minutes — a microcosm of the entire game.

Free throws continue to be an issue for Butler. They were 9-of-16 from the stripe in this game. In the middle of the second half, the referees got a little excited about their whistles — they called 22 fouls in the second half — and when that happens it is important that Butler can knock down free throws. Right now the Bulldogs are 121st in the country in free throw shooting, which isn’t horrible, but could definitely see some improvement.

With Ohio State and Memphis both losing home games to unranked opponents and other teams right in front of Butler struggling, the Bulldogs could jump into the top seven in next week’s AP Poll.