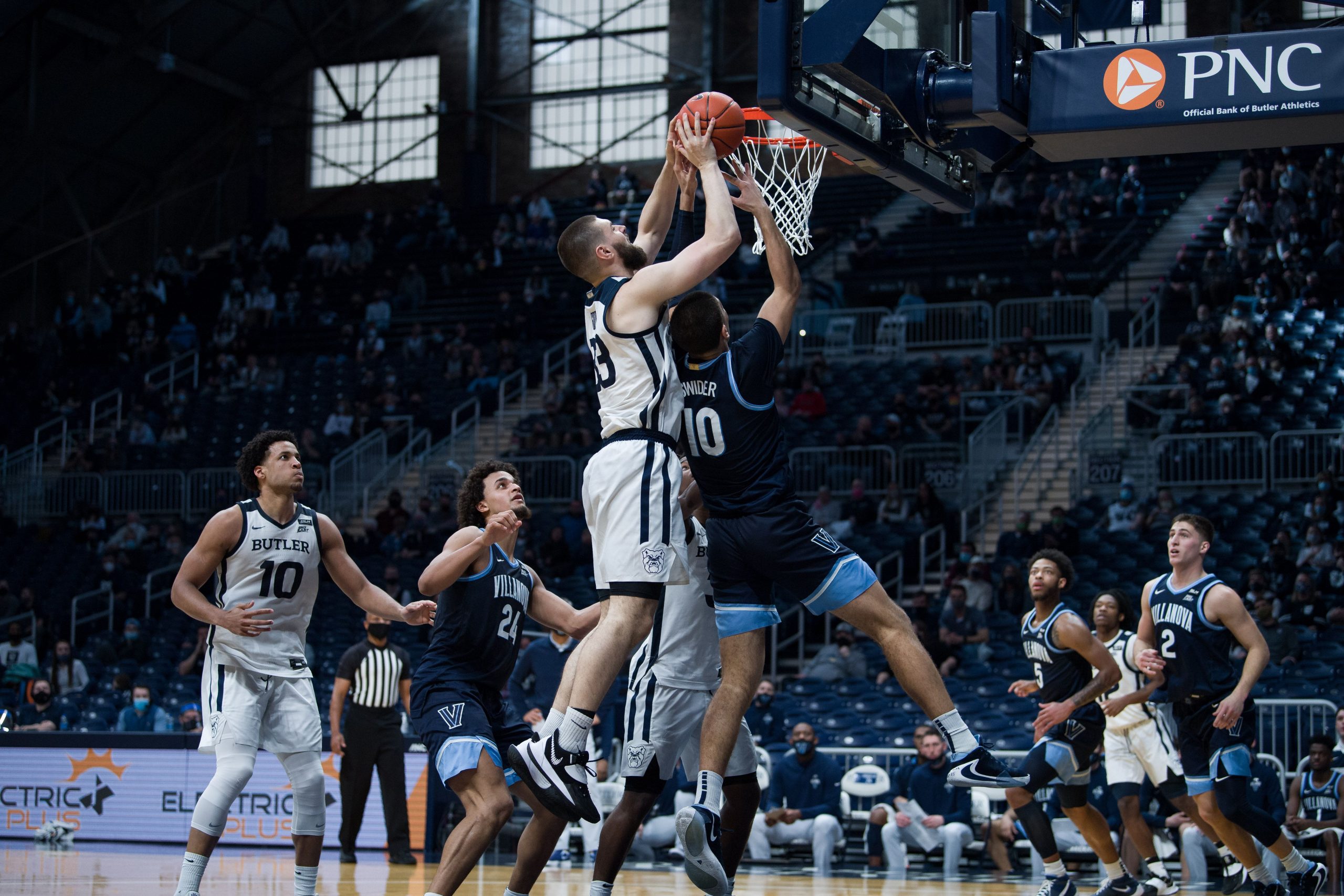 Bryce Golden attempts a layup over a Wildcat defender in the Bulldogs’ 73-61 victory over No. 8 Villanova. It’s Butler’s fourth win over Villanova at Hinkle Fieldhouse in the last five years. Photo by Zach Bolinger.

It was another one of Hinkle’s classic games on Feb. 28 as the Butler men’s basketball team defeated No. 8 Villanova, 73-61. This marks the fourth win over Villanova in the last five seasons.

A freshman led the Bulldogs in scoring on Senior Day as Chuck Harris scored 20 points to pair with five rebounds and four assists. Harris has scored double digits in seven of the last eight games and scored 20 or more points for the fourth time in his 21 career games.

The Bulldogs punched first and never looked back, riding an 11-0 run to turn a tied game to a 31-20 advantage late in the first half. Villanova took a 10-point deficit into the locker room and came out with energy and intensity in the second half, but never got within five points of the Butler lead.

If not for a poor performance from the free throw line — 9-of-20 — the Bulldogs would have outpaced the final 12-point difference. Jeremiah Robinson-Earl led the Wildcats with 16 points and 16 rebounds, seven of which came on offense. Villanova’s demise was their 3-point shooting, though, as the Wildcats shot 2-of-27 from beyond the arc, just a 7% success rate.

The other active seniors stepped up, too, as Jair Bolden scored 15 points including three 3-pointers, while Bryce Nze recorded 12 points, 11 rebounds and five assists. Campbell Donovan even checked in for the final 26 seconds in what could be his last game at Butler. Christian David and Aaron Thompson were recognized after the game as well despite being inactive for the contest.

We go beyond the box score in Butler’s marquee victory of the season.

1. Butler’s perimeter shooting and defense was ultimately the difference

Early on this season, Butler was losing games because of their inability to make shots from beyond the 3-point line and limit their opponent’s looks from that range. On Senior Day, the Bulldogs flipped the script. The home team connected on 10 of its 24 3-point attempts, outscoring Villanova by 24 points in that department. Even without the best perimeter defender in Aaron Thompson, Butler was able to contest open looks and limit offensive rebounds aside from Robinson-Earl, who is difficult for anyone in the country to contain. To counter, the Wildcats did their damage in the post, scoring 44 of 61 points in the paint.

For the sixth-most efficient offense in the country according to KenPom, a 7% shooting performance from beyond the arc is a shock. But if any team was going to force that low of a percentage from deep, it was going to be Butler.

The Bulldogs carried over the defensive momentum from forcing Seton Hall to a season-low 52 points on Feb. 24.

Head coach LaVall Jordan even mentioned after the game that the team was returning to the principles for which Butler basketball is known. Jordan said while there will be some rough patches, the team will find success when it returns to the fundamentals — defending tough and doing the little things. The Bulldogs performed those fundamentals to a “T.” Butler committed just 11 turnovers and 10 fouls in the game, shrinking the opportunities with which the Wildcats could find a way back in the game. Possibly the most telling stat of them all? Villanova, a team that is known for its ball movement and even scoring, recorded just six assists on 24 made field goals. The Bulldogs forced Jay Wright’s team to play stagnant, a style they are not used to playing.For reference, the Wildcats recorded 20 assists in their win over St. John’s on Feb. 23.

2. Butler’s success versus Villanova is a trend

There is no doubt that Butler has had some stellar college basketball players over the last five years. But considering the utter dominance of Villanova’s program over that span, it is no longer a coincidence that the Bulldogs have had this much success against the two-time national champions. The difference between Villanova’s record against the rest of the Big East and at Hinkle is uncanny.

Since the beginning of the 2016-17 college basketball season, the Wildcats have only suffered 20 Big East losses. Five of those losses — 25% — have come at the hands of the Butler Bulldogs. It’s mind boggling to see the Wildcats struggle so much at Hinkle Fieldhouse when they have been so dominant everywhere else. Villanova is 64-16 in Big East games away from Hinkle Fieldhouse over the last five seasons and 1-4 in it. The Wildcats’ lone win in Indianapolis over that span was when they weren’t ranked in the top ten nationally.

After the game, Jordan attributed much of the success to the similarity between the two teams. Both programs routinely are surrounded by knockdown shooters and tough-nosed perimeter defenders. Jordan said it was like facing yourself in practice.

3. A note on the seniors

It is no secret that this has been one of the most difficult seasons for college basketball. Pauses for COVID-19 have disrupted a lot of the rhythm on which student-athletes thrive. With a struggling stretch of basketball just a couple weeks ago, the Butler seniors have to receive much of the credit for not giving up on the season. And they stepped up on the court, too.

After struggling at the beginning of the season, Nze has become the focal point of the Butler offense over the last few weeks, scoring double digits in six of the last seven games. Bolden suffered through an extended slump, but has rebounded to some of his best performances in the last week. The on-court presence of these seniors has led to the Bulldogs’ recent successes.

In a way, this was Jordan’s Senior Day, too. After this season, Jordan will be the head coach at Butler for four years and it was this year’s group that bought in to the new system. While it is still uncertain whether any of these student-athletes will return next year, their presence on the program has been felt.

As Bolden said in his Senior Day speech after the game, it has been a trying year for all of us. It must not have been easy to play a high-major college basketball season through a pandemic. But it was this year’s senior class that led the Bulldogs through some of their most trying times.

While I despise when people include themselves in the successes of their team as if they had any contribution, this was a satisfying experience for me, too. Before the game, I estimated this would be around the 40th game at Hinkle Fieldhouse I have witnessed in the last four years. There were certainly ups and downs, but this win encapsulated all of my experiences in Indiana’s Basketball Cathedral. A team with little expectations plays basketball in its most pure form and upsets Goliath. It’s funny how basketball and sports in general tell some of life’s best stories. As I walk out of the building as a student journalist for the final time, I look forward to returning for many years to come as what I truly am at heart: a fan.