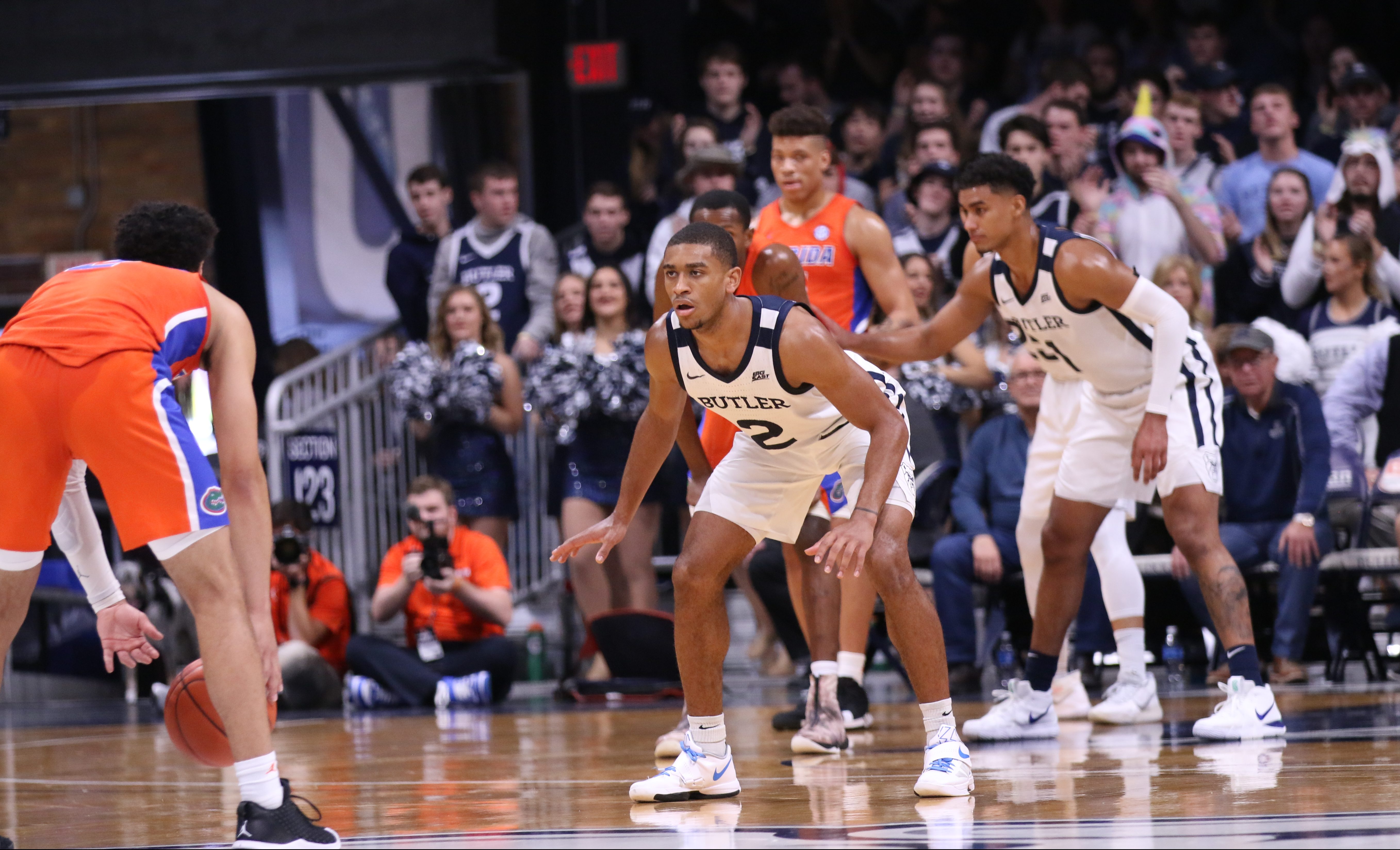 Aaron Thompson and Jordan Tucker play defense against Florida on Dec. 7. Thompson and Tucker combined for 29 points in the win over the Gators. Photo by Xan Korman.

On Saturday afternoon, 9,303 people — the most inside Hinkle Fieldhouse since renovations — packed inside Indiana’s basketball cathedral to watch the Butler men’s basketball team improve to 9-0 with a win over Florida. The Bulldogs took the lead with 3:21 left in the first half and never gave it back, defeating the Gators 76-62. We go beyond the box score of an impressive nonconference victory.

1. The last 7:46 of the first half dictated the rest of the game. And some thoughts on Tucker and McDermott.

Butler has been great at starting quickly in games this season. That wasn’t exactly the case against the Gators. Butler turned the ball over on the first two possessions, Sean McDermott missed four open looks from beyond the arc and the Bulldogs were down 19-13 after a 12-1 Florida run. However, in the last 7:46 of the first half, Butler scored 22 points in just under eight minutes going on a 22-6 run to close the half that ended with a Sean McDermott three at the buzzer. In that stretch, Butler knocked down four threes and distanced themselves from the Gators putting a not great offensive team like Florida in a position where they had to play from behind.

During that stretch, Jordan Tucker scored seven points, getting to the free throw line and knocking down a three. The Duke transfer was great during that stretch and finished with 13 points including three triples, 4-of-5 from the free throw line, and he also got three rebounds. With Nze in foul trouble at times, Tucker gave the Bulldogs valuable minutes — 30 to be exact — and finished with a +/- of 10. Tucker was a spark plug off the bench against the Gators, a role that he fills nicely when Butler is playing at their best.

I would be remiss to not mention what McDermott did after missing some open shots to start the game. The fifth-year senior finished with 16 points, seven rebounds and three assists. After starting 0-for-4, he made his next three deep ones and only missed one shot the rest of the game. McDermott’s ability to bounce back is impressive, but his new ability this season to impact the game well beyond shooting the ball is part of the reason why he has been so good this season.

2. Butler’s ball movement was elite, and so was Aaron Thompson.

Butler’s ball movement has been solid all season, assisting on 135 of the 240 field goals made this year. But it was on another level against the Gators. The Bulldogs assisted on 19 of the 25 made field goals, 11 of which came in the second half, and Kamar Baldwin and Aaron Thompson combined for 13 of those — to just three turnovers between them. At some point, it doesn’t matter what a defense is doing when the ball movement is so good. Florida likes to go into a 1-3-1 zone to try and speed up opposition and Butler surgically picked it apart the few times they tried to throw it at the Bulldogs. The ball movement was mesmerizing.

A big part of that is Aaron Thompson. The junior had arguably the best offensive game of his college career, scoring 16 points while dishing out seven assists and turning the ball over exactly zero times. Thompson continues to show his ability to run an offense and not let anything speed him up. Instead of a 1-3-1 forcing him to make mistakes, he picks it apart and Butler gets a layup and a wide-open 3-pointer. Mike White praised Thompson for his ability to impact a game in so many ways in this era of basketball without shooting the ball. Thompson doesn’t shoot it well, nor does he pretend that he does, but he continues to be a difference-maker for Butler on both ends of the floor.

3. Quite simply, the Bulldogs won this game because they were the better basketball team.

This seems like an obvious statement, but it’s one that I want to address. Butler won this game because they are the better basketball team, and they played like it. The Bulldogs outperformed the Gators in almost every statistical category. They shot 52% from the floor and knocked down 45% of their 3-point shots. They got more contributions from the bench — mainly from Jordan Tucker. The Bulldogs got to the free-throw line more times and made the most of those chances, knocking down 17-of-22 shots from the charity stripe. They won the rebounding battle and held Kerry Blackshear Jr. to just five rebounds when he is averaging almost nine per game. On the defensive end, they held Florida to 6-of-26 from beyond the arc and for large portions of the game made it very hard for the Gators to get into any sort of rhythm.

The Bulldogs have all the pieces. They have seniors — LaVall Jordan praised his seniors’ leadership once again in the post-game presser — that step up big when needed, depth when players get into foul trouble, and they make very few big mistakes. The ball movement is on another level currently and, when their defense is as good as its been, just an above-average offense will be plenty to win a lot of basketball games. Butler has passed every test they could have passed at this point, and there is very little reason to suggest they aren’t getting better every game.

Boy, oh, boy am I excited for Butler’s next game against the Baylor Bears. Today, Baylor knocked off No. 12 Arizona, holding the fourth-best scoring offense in the country to just 58 points on 26% shooting. The Bears get it done in a similar fashion to the way Butler does: they don’t turn the ball over a lot, play great defense and score it efficiently. Both teams are now top 15 at KenPom — Butler 13th and Baylor 11th — and are playing high-level basketball. That one is going to be a lot of fun.