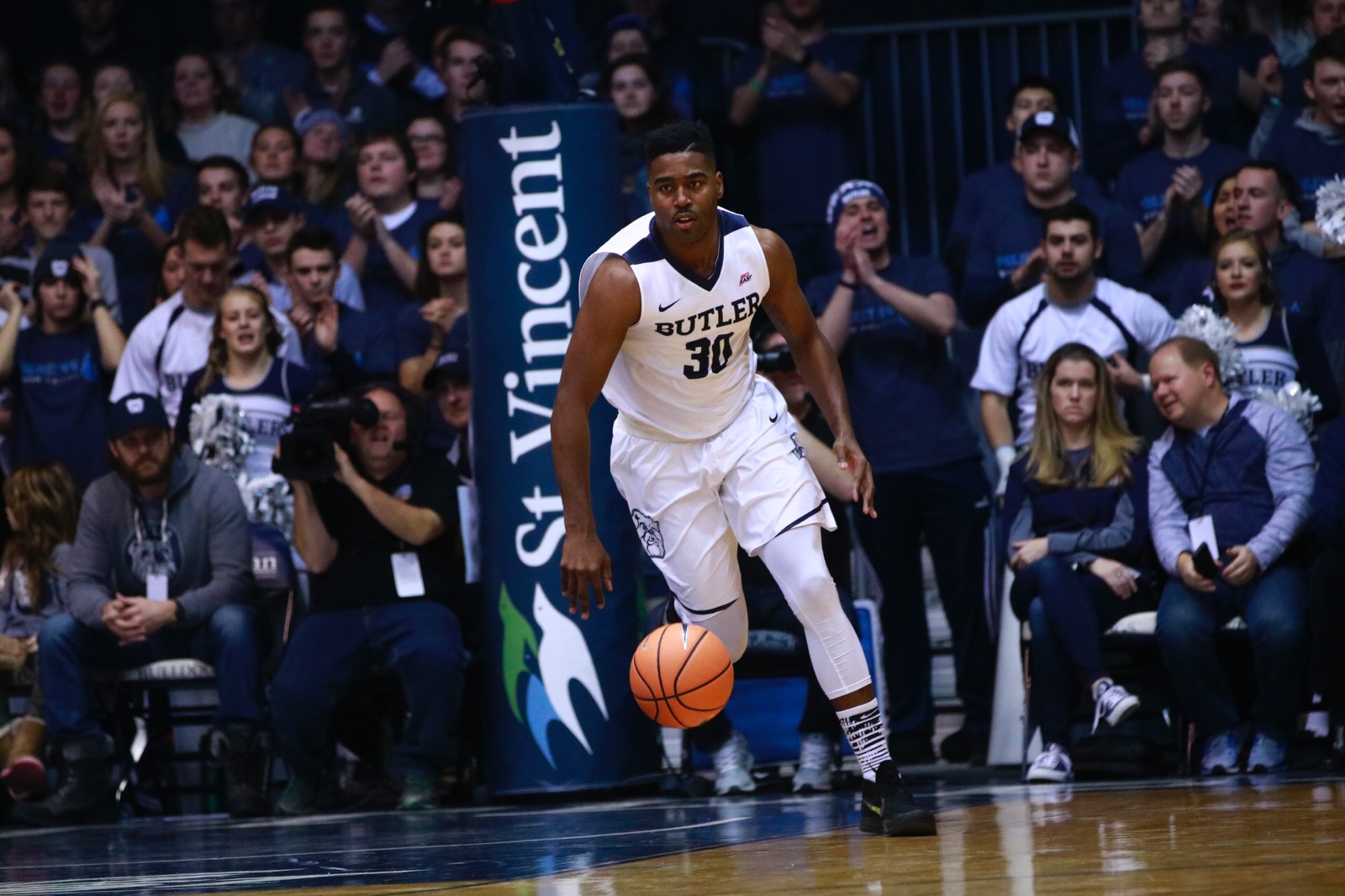 Kelan Martin heads up the court with the ball. Martin had 24 points and eight rebounds in the win over No. 1 Villanova. Photo courtesy of Jimmy Lafakis.

For a second straight year, the Butler men’s basketball team knocked off No. 1 Villanova at Hinkle Fieldhouse. This was a phenomenal performance from Butler and a huge boost to their resume. Give the Bulldogs credit for being able to withstand a late charge from the Wildcats. Here are three takeaways.

1. Butler had a great gameplan and executed it really well.

Jay Wright’s Wildcats aren’t going to beat themselves, so you have to make them work for everything. That’s exactly what Butler did. The Bulldogs only committed four fouls in the first half and prevented Villanova from attempting a single free throw before halftime. This was a coaching masterpiece from LaVall Jordan and the players followed the gameplan to near perfection. After this game, any doubts about Jordan’s ability as a coach and basketball tactician should be put to rest for good.

Phil Booth and Omari Spellman, who came into the game averaging a combined 24 points, had five in the first half, all from Spellman. The duo finished with a meager 10 points between them. Villanova has too many weapons to keep all of them in check. The key is taking away some of them and not giving the Wildcats anything easy, which is precisely what the Bulldogs were able to do for most of the game.

2. Kamar Baldwin is now playing to his full potential and Butler is a much better team because of it.

Baldwin followed up his career-high 31 points against Georgetown with another excellent performance. The sophomore finished with 19 points, nine rebounds and seven assists. On an even more positive note, he made three of his six 3-point attempts, a vast improvement from the 28 percent he was shooting from deep coming into this game. He’s never going to be an incredibly efficient scorer, but that’s fine. Baldwin has really struggled so far this season. It looks like that might be changing.

If the Bulldogs are going to be competitive game in and game out in the brutal Big East, they need more consistent performances from Baldwin. It’s still very early, but he’s been fantastic in conference play so far. When Baldwin plays like this, Butler is a completely different team, particularly on offense. The threats that he and Kelan Martin pose to defenses playing at the level they are right now (101 points combined in their last two games) make life easier for everyone else. This is the Kamar Baldwin everyone hoped to see.

Starting off conference play 2-0 and knocking off the No. 1 team in the country for a second consecutive season is fantastic, especially considering the Bulldogs’ next three games are at No. 6 Xavier, home against No. 23 Seton Hall, and at No. 25 Creighton. Butler now has plenty of breathing room and an incredible amount of confidence. Plus, the Bulldogs now have their toughest home game of the season out of the way.

All that being said, this one game, as impressive as it was, is just that: one game. Butler isn’t going to shoot 60 percent from the field and 68 percent from three every time they take the floor. The Bulldogs need to make sure the Villanova game serves as a springboard heading into the teeth of Big East play, not the highlight of the season. Even with a win over the No. 1 team in the country, Butler needs at least seven more conference victories to feel confident about making the NCAA tournament. This was a huge step in the right direction, but college basketball is a marathon, not a sprint. It’s important to remember that.