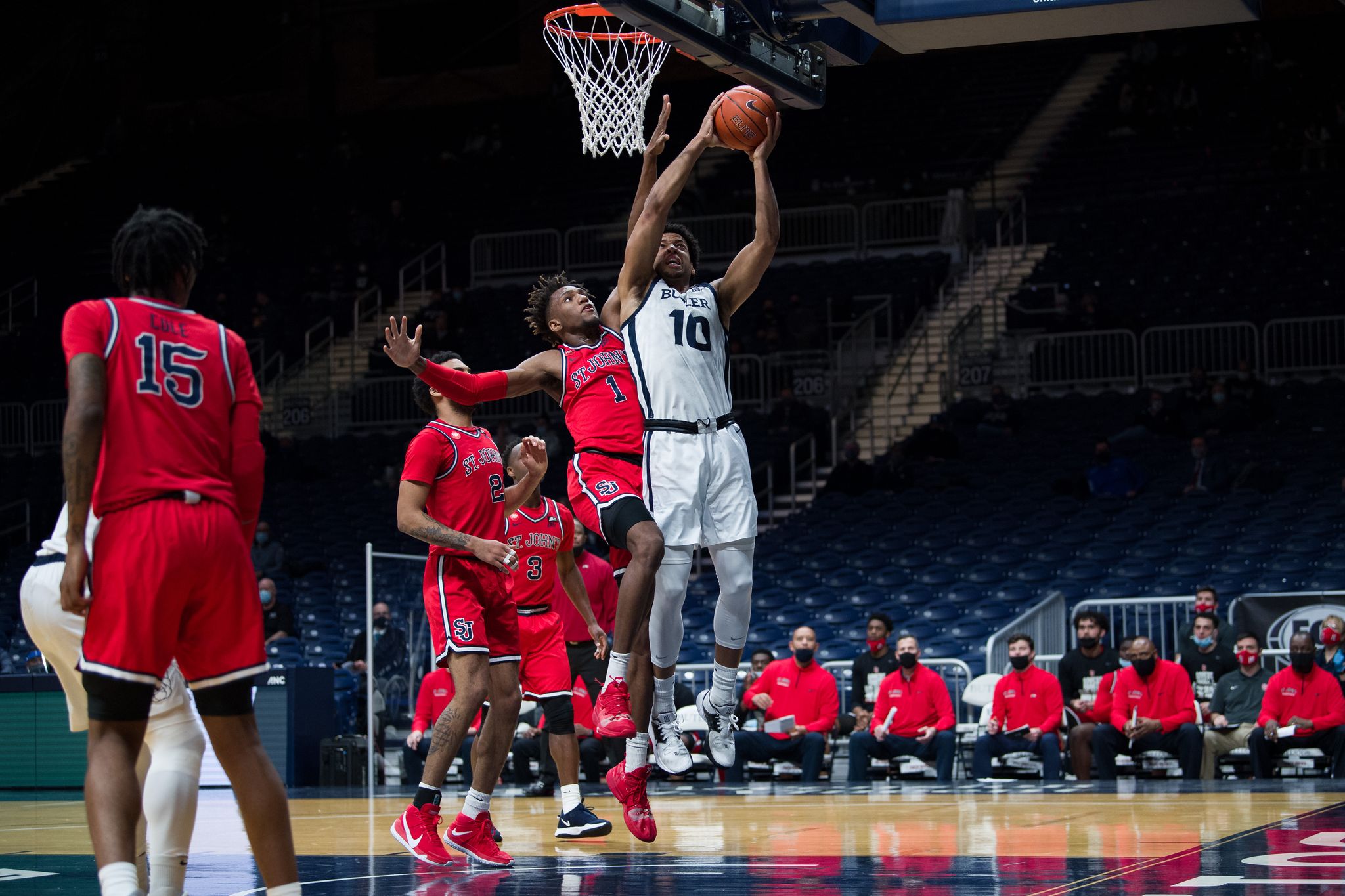 Bryce Nze goes up for a lay-in during Butler’s 76-73 overtime win over St. John’s on Feb. 9. Nze led the Bulldogs with a team-high 19 points and 10 rebounds. Photo by Zach Bolinger.

The Butler men’s basketball team did not hold a lead over St. John’s until 30 minutes into the ballgame, but they gradually overcame a 16-point deficit to defeat St. John’s in overtime, 76-73. The Bulldogs move to 7-10 overall and 6-8 in the Big East, good for solo seventh in the league.

Four different Bulldogs scored in double figures, with Bryce Nze and Aaron Thompson leading the way with 19 and 17 points, respectively. Bo Hodges chipped in 12 points and eight rebounds, while Bryce Golden logged 11 points. Despite converting just six of 24 3-point attempts on the night, Butler shot 46% from the field.

On the defensive end, Butler limited St. John’s star freshman Posh Alexander to just eight points off 4-of-10 shooting from the field and held the Johnnies to under 24% shooting from beyond the arc. Julian Champagnie poured in 19 points — his average for the season — but role players like Isaih Moore and Rasheem Dunn were tasked with some of the heavy lifting as Alexander struggled. The Red Storm shot just 35% from the field in the second half and overtime.

Once again, the Bulldogs clawed back from a double-digit deficit in the first half, stunning one of the hottest teams in college basketball in the process. Let’s go beyond the box score in Butler’s fifth Big East win at Hinkle Fieldhouse this season.

1. Senior leaders had their best game as a duo this season

Senior Bryce Nze came out of the gates playing really well. In the first 12 minutes of the game, the senior forward already had seven points, three rebounds and had drawn two fouls. The beginning was a good sign for the ensuing good performance as the Bulldogs drew up many of their early possessions to include Nze as a ball handler, whether to make a move in the post or pass out to the wing. Nze finished with 19 points on 8-of-13 shooting while grabbing a team-high 10 rebounds in 40 minutes.

When Nze plays well, he proves he can be the leading scorer of this team. Not only did the senior play well around the rim, but Butler began having Nze bring the ball up the floor to disperse the Johnnies’ full-court pressure. When Nze and fellow senior Aaron Thompson are in sync, they are quite the dynamic duo in the pick-and-roll. Towards the end of the half, Butler continued to involve the two in the offense and got good results as the Bulldogs successfully dug themselves out of a 16-point hole.

Similarly, Thompson was terrific throughout all of his 44 minutes of game action. The senior guard scored 17 points while dishing out a season-high 10 assists. Despite not being a prototypical scoring guard, Thompson was the key cog in the Butler offense down the stretch, scoring the game-tying layup with two seconds left to force the game into overtime. The senior leader can also be credited with the defensive play on St. John’s Alexander and forcing his counterpart into an early four fouls. No. 2 is undoubtedly this team’s heart and soul.

Not surprisingly, seniors are expected to lead their teams to big-time victories, but this Butler team is capable of playing with anybody when these two are both on their A-game.

2. Butler struggled with connecting from deep, but forced misses at the other end

What was not ideal was the Bulldogs’ inefficient shooting from beyond the 3-point line — making just six of their 24 attempts. However, the Bulldogs uncharacteristically forced their opponent to miss shots from deep on the other end of the floor. St. John’s made just four treys on the night.

Most glaring among Butler’s strugglers from deep were perimeter regulars Jair Bolden and Chuck Harris. The two combined for just 2-for-14 from beyond 3-point land, despite accounting for 63% of the team’s makes from long range this season.

Nine times out of ten, a 2-for-14 performance from Bolden and Harris is a kiss of death for the Bulldogs’ chances of pulling out a victory over any opponent in the country. Butler compensated, though, in other areas of the basketball game, racking up seven steals and corralling 13 offensive rebounds, leading to extra possessions. For a St. John’s team familiar with scoring 90 points or more in games this season, this was very debilitating to their offensive flow.

Though the Bulldogs did turn the ball over 15 times — a figure that is especially high for this team — they made an effort to not give up points directly following as the Johnnies only held a two-point advantage in points off turnovers.

3. Butler played a bit of bully ball against the Red Storm

St. John’s is by no means a small basketball team. Isaih Moore, standing at 6-foot-10, slammed home five dunks in the first half alone. All year, the Bulldogs have been chopped at the knees by forwards and centers on the opposing team. Not on Tuesday. Butler out-rebounded the Red Storm by seven and outscored them in the paint by eight.

For a Bulldogs team that has struggled converting on two-point field goals all season, a 23-for-39 performance from inside the arc against St. John’s is a sight for sore eyes. Nze, Thompson, Golden and Hodges — all players who do their damage in the paint — each registered double-digit points.

On the other side, Butler made it very difficult for their forwards to get anything going. Although Champagnie tied a game-high with 19 points, he shot under 50% to do so. The sophomore also struggled from 3-point land, shooting just 2-for-7. This performance was no individual effort, either. All five of Butler’s starters recorded four rebounds or more.

Earlier in the season, it would be fair to say Nze and Golden disappointed considering their performances last season. Now, Butler’s returning players stepped up to deliver an unlikely win against one of the hottest teams in the country, aided by just a sprinkle of Hinkle magic.

It continues to perplex me how Butler continues to find itself in double-digit holes night in and night out. Yet, they overcame one in both of their wins in the past four days. When the score was 30-16 St. John’s with 6:34 remaining in the first half, ESPN gaves the Johnnies a 91% win probability. With eight seconds left in regulation, Butler was down two points and without the basketball — an 85% chance of coming out on the losing end. For head coach LaVall Jordan’s sake, it’s a good thing computers don’t decide basketball games. The Bulldogs are now 6-8 in Big East play and travel to Georgetown on Saturday, Feb. 13.