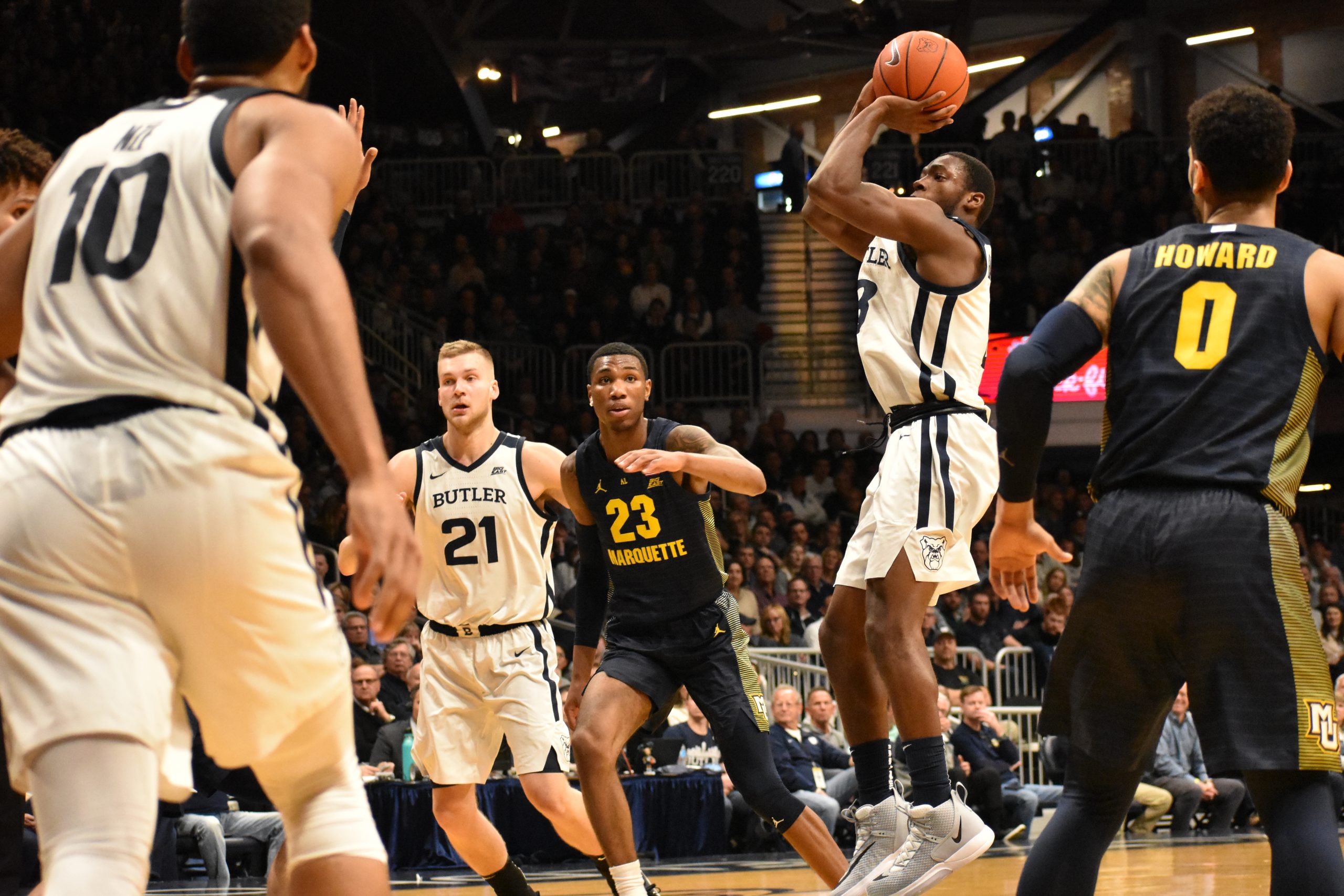 Kamar Baldwin takes a shot during Marquette on Jan. 24. Baldwin finished with 30 points in the overtime win. Photo by Donald Crocker.

It was an eventful night inside Hinkle Fieldhouse on Jan. 24. 9,204 people piled into the building to watch Butler Blue IV meet the crowd for the first time and watch Butler men’s basketball beat the Marquette Golden Eagles 89-85 in overtime.

Kamar Baldwin was simply incredible. The senior had 30 points, eight rebounds and five assists and scored 23 of Butler’s final 33 points. Without Aaron Thompson in the lineup, he had to be great. Describing Baldwin’s play as great might be an understatement.

The Bulldogs trailed by four at halftime. Marquette’s Markus Howard, doing what he does best, put the ball in the basket. He had 18 points at halftime and the Golden Eagles were winning the rebounding battle by seven.

Butler spent most of the half hovering around a six-point deficit due, in large part due to Marquette’s 16 total threes and 12 in the first 40 minutes. In the middle of the second 20 minutes, Butler struggled to get stops. But then the stops came, Baldwin happened and despite a poorly executed final seconds of regulation, the Bulldogs were able to force overtime.

Howard had just eight points in the final 25 minutes of the game, shooting 3-of-15 from the field in that time span, thanks to great defense by Baldwin and Henry Baddley. Other Marquette players like Sacar Anim and Kobe McEwen stepped up in the second half and overtime to keep them going while Howard struggled.

We go beyond the box score of the type of game that gets rid of a three-game slump and gets a team back on track.

1. Kamar Baldwin was everything he needed to be, and more.

What Aaron Thompson brings to this team can’t be understated. He’s the defensive leader and really the guy who makes the offense go. On this particular night, Butler just so happened to play the team with the best scorer in the country and they were going to have to guard him without their best defender. Tonight, Baldwin was the ultimate equalizer on both ends of the floor. He and Henry Baddley — we’ll get to him — played great defense on Howard, a preseason AP All-American, and then he was lights out on the offensive end.

To be honest, Baldwin didn’t have the best of starts. At halftime, he had two points on 1-of-5 shooting and at one point was 2-of-10 from the floor.

And then he flipped a switch.

Baldwin, once again, completely took over the game late, something he’s proven this season he is capable of doing. He scored 23 of the last 33 points that Butler scored including 10 of the 18 in overtime. He was patient and took what the defense gave him, getting open mid-range jumper after jumper and getting to the rim. He got to the free-throw line 11 times, knocking down 10 of them. Butler was down by four points with less than two minutes left. He got back-to-back buckets and then put the Bulldogs up three with free throws. All the while, he had eight rebounds and five assists to go along with his 30-point performance.

This is probably one of the worst games for Thompson to miss. Howard was always going to put incredible pressure on Butler’s defense and not having Thompson was a big deal and we’ve learned the last couple weeks that when Thompson doesn’t play well it has a huge impact on Butler’s success.

Tonight, Baldwin was the ultimate equalizer. It probably won’t be the last time.

Quietly, Butler has had its ups and downs in the health department. Baldwin was hurt early and Christian David began the season with a concussion and is, of course, out for the season with an ACL tear. Head coach LaVall Jordan has stressed a “next man up” mentality all season.

The man up tonight was Henry Baddley, and he stepped up in a big, confident way. The senior had only played more than eight minutes twice since early December, but he got 31 minutes tonight and made the most of them. He scored 10 points on 4-of-5 shooting. Where he really shined won’t show up in his box score, but in Howard’s. Baddley was a key part of Butler’s defensive scheme against the Marquette senior along with Baldwin.

Baddley was playing so well that Coach Jordan went small late in the game, playing Bryce Nze at the center position to keep him in the game, allowing him to disrupt Howard for the majority of the second half. Out of the 25 possible minutes in the second half and overtime, Baddley played 21 of them.

Baddley was the epitome of the next man up against Marquette, but Butler got solid contributions from all eight players who took the floor. All eight scored and even players like Khalif Battle had a +/- of +8 in just nine minutes of action. Tonight was the night Butler had to walk the “next man up” walk and they were able to do it.

3. This is the kind of win that gets a team out of a slump.

The last couple of weeks haven’t been that fun for Butler basketball. Three straight losses, a torn ACL and an injured wrist which can be a very nagging injury. This game had a chance to slip the Bulldogs further into that slump and into a four-game losing streak. Instead, quite the opposite happened.

For a long time, it looked like Butler wasn’t going to win this game. They were struggling to get stops late in the second half and at times were trading 2-point field goals for 3-pointers. They were down by four with less than two minutes left and found a way to win. From a very literal standpoint, it ends the three-game losing streak.

But also, Sean McDermott broke free of his 1-of-11 performance at Villanova for 16 points and nine rebounds. It was the kind of performance that would have gotten much more attention if not for what Baldwin did. Battle got even more experience in high-pressure situations while Bryce Golden, Jordan Tucker and Nze continue to be consistent contributors. Now, when Thompson comes back he joins a confident Baldwin, Baddley and McDermott.

In a perfect world, Butler wouldn’t need overtime to beat an unranked team at home, but the circumstances of this particular night turned it into a game that Butler had to fight to win. That kind of game gets teams out of slumps. In the Bulldogs’ case, they would be coming out of a slump and get to play four of their next six games at home.

There were two elite guards on the floor tonight: Kamar Baldwin and Markus Howard. No debate, these are two of the best guards in the Big East and both of them can hold their own against the best guards in the country. The difference tonight was Butler had the more clutch guard. Howard struggled down the stretch and Baldwin took over and put the Bulldogs on his back. That was ultimately the difference.