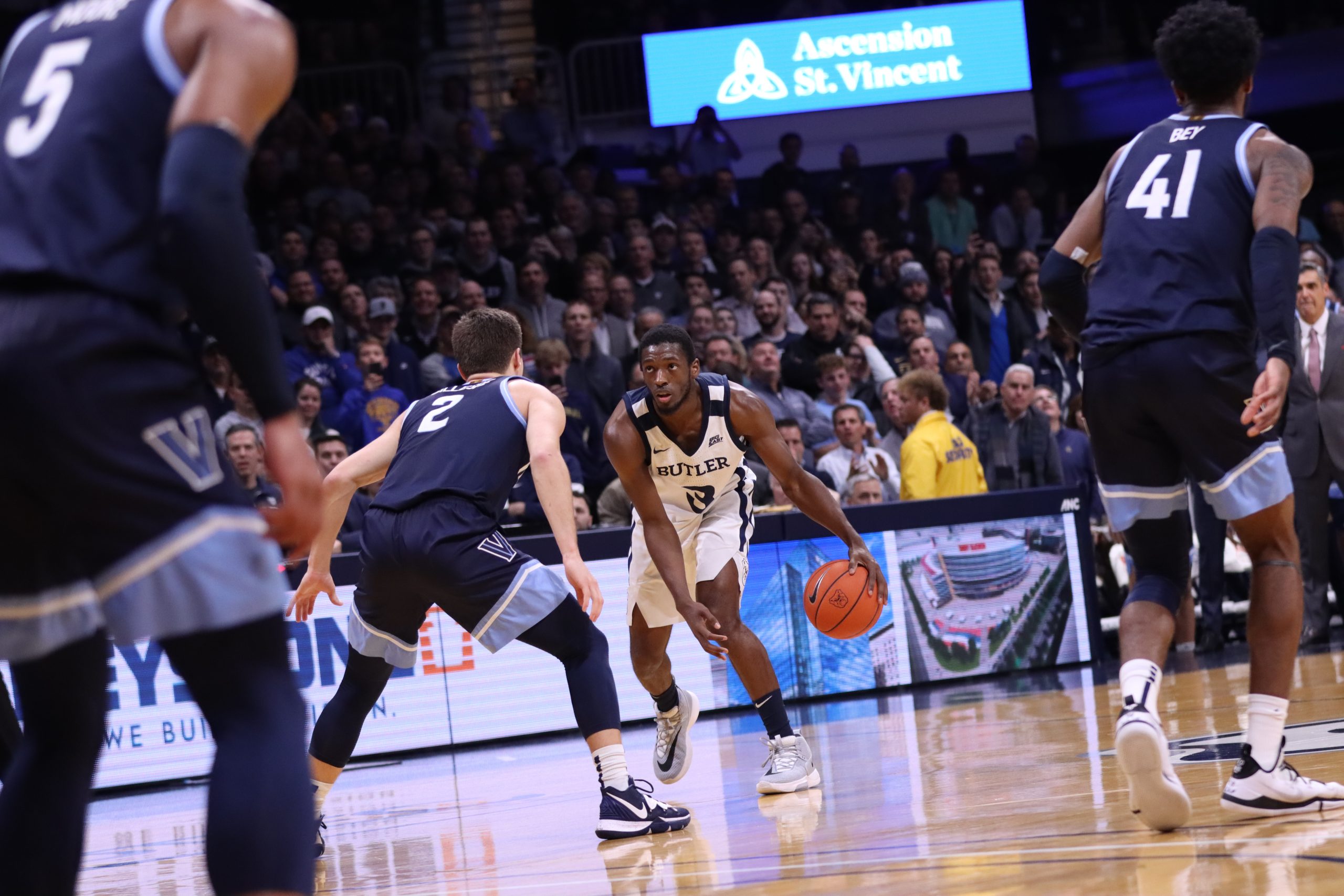 Kamar Baldwin watches the clock tick in the final seconds of Butler’s 79-76 win over Villanova on Feb. 5. Moments later, Baldwin hit a buzzer-beater to win the game. Photo by Xan Korman.

There was a rain delay inside Hinkle Fieldhouse, Aaron Thompson made his return and Kamar Baldwin hit a game-winner over Collin Gillespie in the span of two and half hours. At the end of it, the Butler men’s basketball team walked away with a 79-76 win over No. 10 Villanova on Feb. 5.

Aaron Thompson made his return after missing three games with a left wrist injury and his impact was immediately evident — we’ll get to that. All five Butler starters scored nine points or more and four of the five tallied 12 or more points. After going 1-of-11 from the field in the first matchup against Villanova, Sean McDermott led Butler with 21 points on 7-of-8 from the field and 3-of-3 from deep. The senior sharpshooter got similar open looks he got in the first game, but he was lights out in this one. As a team, Butler shot 58% from the field and 46% from beyond the arc

Villanova was a two-headed monster on the offensive end and little else. Collin Gillespie and Saddiq Bey accounted for 57 of the Wildcats’ 76 points. The pair was 20-of-39 from the field and they knocked down eight trifectas between them. Quite simply, they were phenomenal, but the Bulldogs were able to completely shut down the rest of the Villanova lineup.

That’s not to say the Wildcats didn’t have their success on offense. In the first game between these two teams, Villanova shot just 37% from the field and 36% from deep in a game they won quite easily by 15. Tonight, they shot just under 50% from the field and 52% from beyond the arc while turning the ball over just three times.

We go beyond the box score on a night that featured a very important red bucket catching water coming through the roof of Hinkle Fieldhouse, an even more dramatic bucket from Kamar Baldwin and a top 10 win for the Bulldogs.

1. Butler’s physicality and the Bryce’s.

The Bulldogs absolutely dominated the interior in this game. From a numbers perspective, Butler won the points in the paint battle by 14 points — 42-28 — and won the rebounding margin by six. Villanova’s Jermaine Samuels and Jeremiah Robinson-Earl combined for just 11 points on 3-of-8 shooting. Butler set the tone early and often with the physicality on the interior. Bryce Golden and Bryce Nze couldn’t have been better.

It was Nze who was providing the real spark in the first half. He was involved early and often in the post. He had his way with whichever Villanova player was guarding him whether it was Samuels or someone else. He was getting to his spot on the interior with ease and — despite not being able to finish on several occasions — had six points and three rebounds after the first 20 minutes.

Then it was the Bryce Golden show in the second half, and you really saw just how good Golden can be when playing at his best. Golden finished with 18 points on 9-of-12 shooting, five rebounds and three assists. He scored eight of the first second half points and was all over the floor on both ends of the floor. He was more physical on the interior than Villanova’s big men — as was Nze — and opened up the floor on the offensive end with his ability to find cutters and open teammates with the ball at the top of the key. It was clear just how important Golden can be on the offensive end tonight.

And most importantly, Nze and Golden combined for just two turnovers. Two.

2. It’s not a coincidence that Butler’s best performance in recent weeks, and maybe all season, came with Thompson back in the starting lineup.

It’s been the commentary surrounding this Butler team for the past three games. Aaron Thompson’s impact can’t be understated. From a very simple perspective, he allows players to return to their normal roles on this team. Kamar Baldwin can focus on scoring again and Jordan Tucker can come off the bench as a sixth man once again. Neither Baldwin or Tucker had particularly efficient games, but they were both clearly back in spots they are comfortable with as a result of Thompson being back in the lineup.

Head coach LaVall Jordan felt the same way. “He’s got such great command of what’s the best thing for our team in the moment,” Jordan said.

Thompson had nine points along with two assists. Per usual, the junior’s numbers aren’t going to jump off the page, but the numbers of the rest of his teammates will. It was probably the most balanced offensive attack of the season. When Thompson is the main facilitator, everyone else gets to be weapons and that works out really well when Thompson’s most dangerous role is as that facilitator. The most dangerous form of this Butler team, on both ends of the floor, heavily involves Thompson and it was clear tonight.

His impact can’t be underestimated. They just look like a different team with him on the floor and it’s not a coincidence that everyone around Thompson looked really good tonight

3. All of a sudden, the Bulldogs are in a really good position.

Butler’s “slump” of sorts has turned into three wins in their last four games. They’ve got arguably their most important player and point guard back. It’s unclear how healthy he is, but there weren’t any instances where it was obvious he was hurting other than every layup he took was with his right hand — but that isn’t that uncommon for the left-hander.

Butler has eight Big East games remaining. Only one of them comes against a team ahead of them in the Big East standings — Seton Hall. Five of the eight games come against the four worst teams in the conference in terms of record and the only one of those games away from Hinkle Fieldhouse is against Xavier.

Give Jordan and this team credit, they survived a stretch without Thompson that could’ve been much uglier than it was, now they have a relatively favorable last eight games and they sit just a game back of second in the conference closing the gap between them and Villanova.

It’s what everyone else is thinking, here’s everything you need to know about the rain delay, the red bucket, and the unsung heroes behind it: