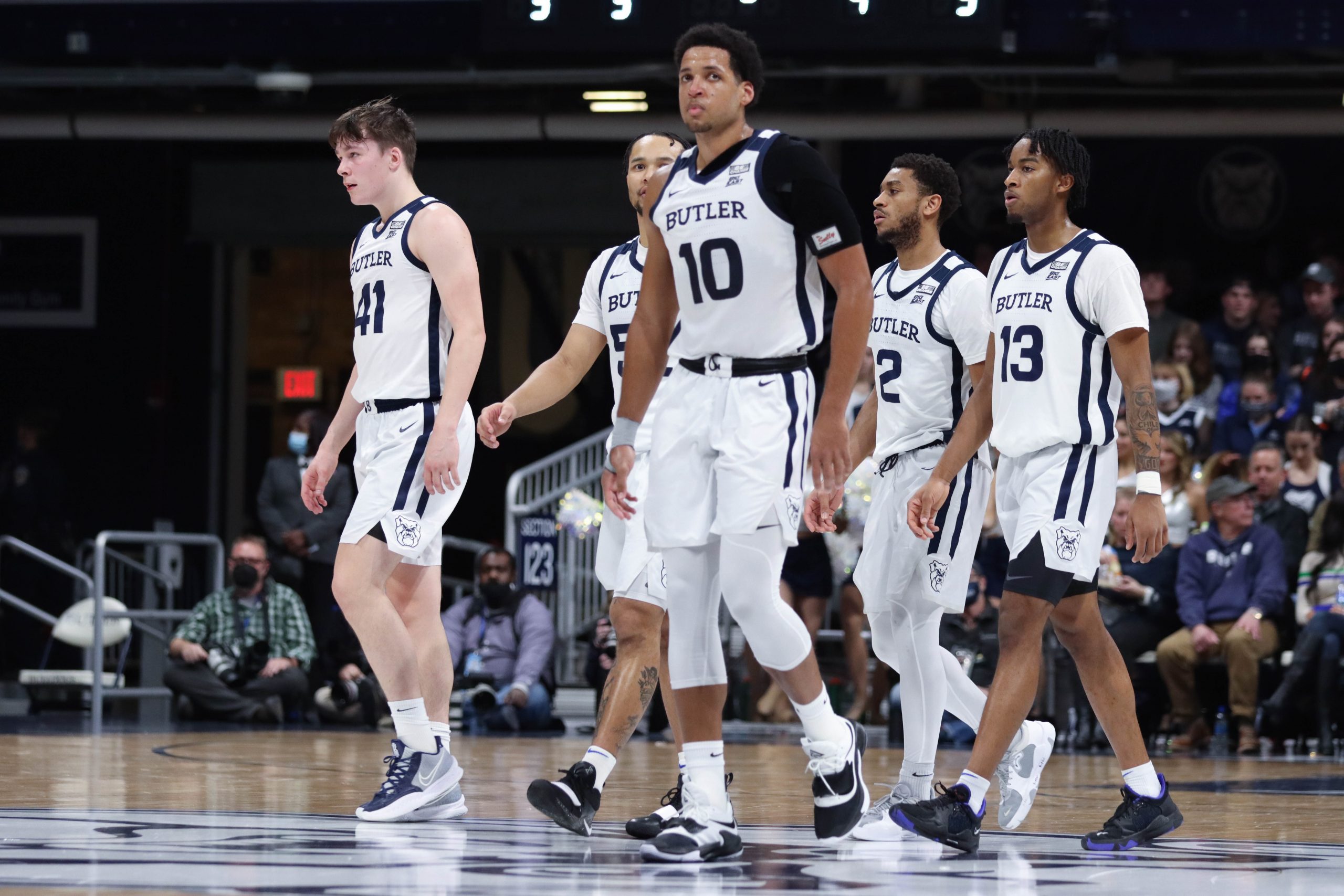 From left to right, Simas Lukosius, Jair Bolden, Bryce Nze, Aaron Thompson and Jayden Taylor walk up the floor in Butler’s game versus Xavier on Jan. 7. Butler is 0-2 versus the Musketeers this season. Photo by Francie Wilson.

The Butler men’s basketball team finished the regular season on a five-game losing streak, but a new season starts today in New York City. Butler and Xavier are set to kick off the Big East Tournament in the “Mecca” of basketball arenas — Madison Square Garden. The winner of this eight vs. nine matchup will play AP No. 11 Providence on March 10.

This is a rematch from last year’s first-round matchup featuring these two teams, when Butler came back from down 15 in the second half to force overtime and eventually win, 70-69. Bryce Nze, Bryce Golden and Chuck Harris combined for 60 of Butler’s 70 points and Harris scored eight points in overtime to send Butler to the quarterfinals.

Both teams head into this game coming off their worst stretches of the season. Butler has lost five consecutive games and seven of their last nine. Xavier’s win over Georgetown in the last game of the regular season broke a five-game losing streak, and the team has also lost seven of their last nine games. Outside of Georgetown, these are the two coldest Big East teams heading into the tournament.

While recent form absolutely matters, this is a whole new stage of the season. Xavier is clinging on to the hope of an NCAA Tournament bid, and a loss to Butler would likely end that dream. Butler is hoping for a miracle run in the Big East Tournament to extend the careers of seven players. There is a lot on the line in this game, and the rivalry between the two schools only adds fuel to the fire.

Here’s what you need to know ahead of the first game of the 2022 Big East Tournament:

Since Butler moved into the Big East prior to the 2013-2014 season, results in the annual conference tournament have been subpar. The Bulldogs are just 2-7 in the Big East Tournament and the furthest the team has advanced was the semifinals in 2018. Unfortunately for the program, arguably the best Butler team since joining the Big East was the 2019-2020 squad, but the tournament was canceled before No. 24 Butler could play their quarterfinal matchup with Providence.

Butler has played in the first round — which consists of seeds 6-11 — in three separate tournaments, with the only win coming last year over Xavier. For whatever reason, the program has struggled in the competition over the years. However, under head coach LaVall Jordan, the team has produced better results.

The Bulldogs lost in their first tournament game in every season from 2014-2017, but since Jordan’s arrival prior to the 2017-18 season the program is 2-3 in Big East Tournament games — a record that may have been better in the 2020 tournament wasn’t canceled. While it is unlikely that Butler will make a deep run in this tournament, recent history suggests it may not be a one-and-done for the Bulldogs.

As mentioned before, neither of these teams enter this game playing their best basketball. However, both Butler and Xavier have shown throughout the season that they are capable of playing great on any given day.

Butler’s wins over Marquette, Creighton and Oklahoma — as well as the overtime loss to Providence — show what this team is capable of when they are firing on all cylinders. Xavier’s wins over Creighton, UConn, Ohio State, and the triple-overtime loss to Providence prove what they can bring as well. The problem with both teams — and for Butler specifically — is consistency. The Bulldogs’ two games against Marquette show just that.

In the first game at Hinkle Fieldhouse, Butler hit 13 3-pointers at a 46% clip in a six-point win over the ranked Golden Eagles. In the second game, Butler hit one 3-pointer in the final 36 minutes of the game in the eight-point loss. As simple as it sounds, much of Butler’s success this season has been dictated by how well the team shoots from behind the arc. The Bulldogs are 8-3 this season when shooting above 35% from three — the three losses were to current No. 18 Houston, by three to St. John’s and by one in overtime to current No. 11 Providence.

On the flipside, Butler is just 5-15 when shooting under 35% from three, and all five wins came against subpar opponents — Georgetown twice, DePaul, IUPUI and Eastern Illinois. It’s important to note that much of Butler’s success from behind the arc seems to be tied to playing at Hinkle though, as Butler hasn’t shot above that 35% mark on the road since Dec. 7.

Xavier is a much better shooting team than Butler when they are on their game, and these hot performances directly lead to wins. Xavier is 9-0 when shooting above 42% from deep, including a 10-22 outing to beat the Bulldogs in Hinkle earlier this year. Just like the Musketeers can get red-hot, they can also get ice-cold. Xavier is 3-8 when shooting under 27% from three this season, but one of those wins came over Butler when the Musketeers shot just 3-17 from deep in their 68-66 win.

This is important to remember, because while Xavier has lethal shooters like Adam Kunkel and Nate Johnson, the team also has very good interior players like Zach Freemantle and Jack Nunge. Butler has struggled all season against opposing bigs, and Freemantle torched the Bulldogs with 23 points in Xavier’s close win in Cincinnati, a game in which Kunkel and Johnson combined to shoot 0-8 from three. While it is crucial that Butler remains keyed in on Xavier’s shooters, leaving Freemantle or Nunge open in the paint will cause just as much damage.

The short answer is yes. Xavier has been playing their worst basketball of the season, so if there was ever a time to beat them, it would be now. While Xavier theoretically has more to play for with an NCAA Tournament bid on the line, Butler’s seven seniors will not go down easily.

This game will come down to the fundamentals. If Butler shoots the ball efficiently, rebounds and plays solid defense on both the perimeter and interior, they have a very good chance of winning this game. To do this, Butler will likely need someone to step up. Could it be Chuck Harris, who despite his inconsistencies this season, still has six games with 18 or more points? Or Jayden Taylor, who scored 18 points against Xavier earlier this year? Bo Hodges, Aaron Thompson and Bryce Golden all have at least one 20-point game this season, could one of them heat up?

It is now or never for Butler. A loss would mean the end to the season and to the collegiate careers of seven seniors. A win would extend the season and the seniors’ careers by at least a day, with a chance to make a run in the Big East Tournament and force everyone to forget about the 18-loss regular season.

The Butler Collegian will be covering the Big East tournament live from Madison Square Garden. Follow @henrybredemeier on Twitter for updates throughout the tournament.