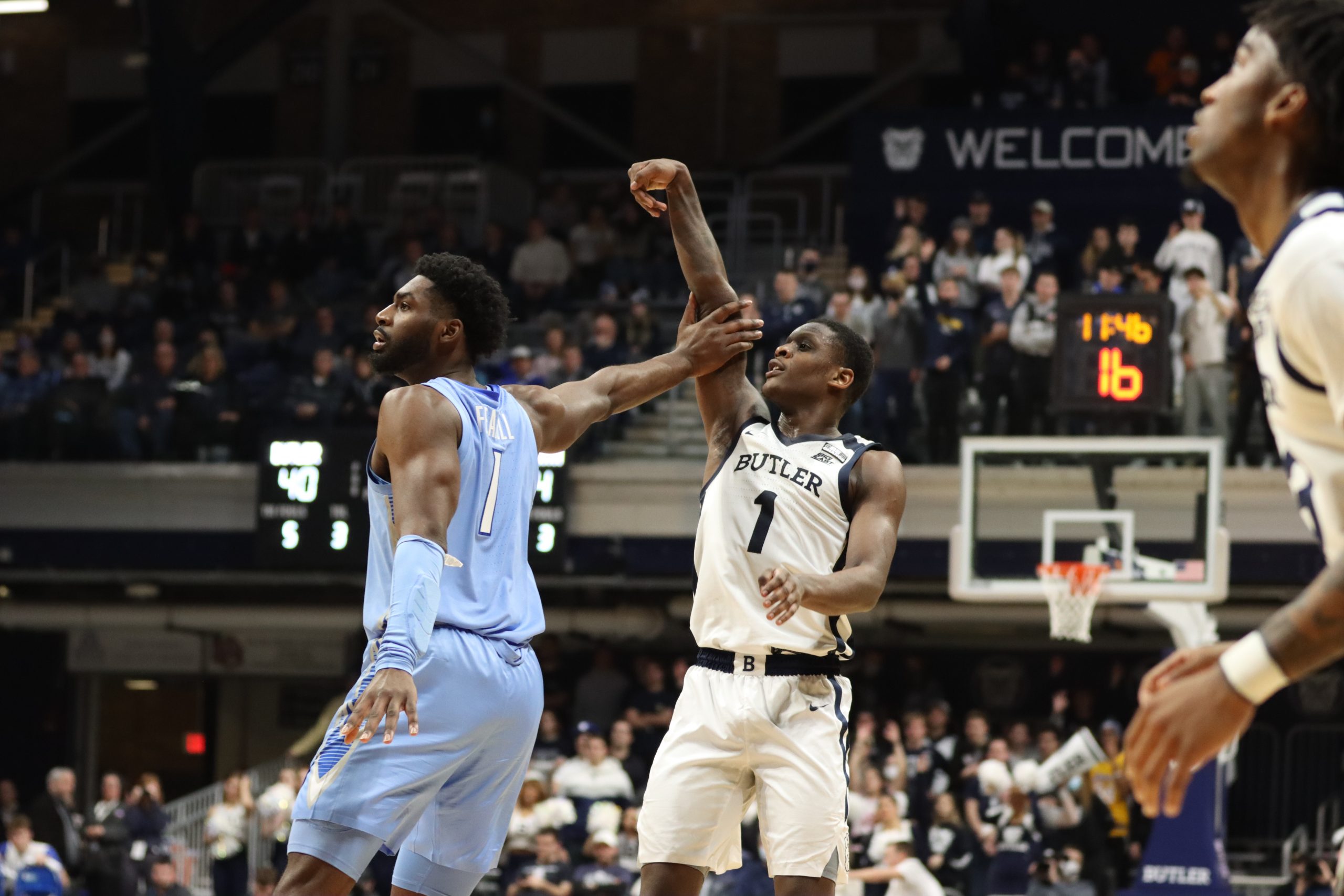 Bo Hodges watches his 3-point shot fall midway through the second half in Butler’s 72-55 win over Creighton on Jan. 26. Hodges scored 18 points, grabbed seven boards and recorded two steals in the win. Photo by Francie Wilson.

The Butler men’s basketball team broke its four-game losing streak with a resounding 72-55 win over Creighton last night. In his second game in the starting lineup, Bo Hodges led the way with a Butler career-high 18 points, seven rebounds and two steals. Chuck Harris added 14 points and four rebounds. The Bulldogs move to 10-10 on the season and 3-6 in Big East play.

Until around the 14-minute mark in the second half, virtually nothing separated the two teams. Neither team was shooting the ball well, and it appeared the game was going to come down to which team could get hot down the stretch. The last two games — versus UConn and Providence — had a similar feel, and both times the Bulldogs’ opponents were the ones to hit the big shots.

Last night, it was Butler’s turn. With 12:30 to play and Butler clinging onto a four-point lead, Hodges was fouled on a drive and subsequently hit both free throws. The next possession, Hodges hit a 3-pointer to increase the lead to nine. Then Harris hit a three. On the ensuing offensive possession, Simas Lukosius drove through the lane and threw a wicked behind the back pass to Bryce Golden at the top of the key for another three. Next possession, Golden hit yet another three. After a Creighton jumpshot, Lukosius returned the favor with a three of his own.

In the span of three minutes, Butler turned a four-point lead into a 19-point lead thanks to five straight 3-pointers. And naturally, Hinkle erupted into a frenzy.

This is a team that has struggled shooting the ball from deep all season, but last night, everything was falling. The Bulldogs shot with confidence, and that confidence translated to the other end of the floor, where the defensive effort was superb.

The Bulldogs still have a lot of work to do to dig themselves out of the hole they’ve dug, but the team proved they are capable of it. Let’s go beyond the box score in Butler’s most complete performance of the season so far.

The new starting five is here to stay

Head coach LaVall Jordan stuck with the starting lineup that pushed Providence to the brink on Sunday, and it paid off. Inserting Hodges and Harris into the lineup alongside Aaron Thompson, Bryce Golden and Bryce Nze gives Butler more size and athleticism, and an ability to push the ball offensively rather than play a slow, half-court style.

Hodges is the key to this. He combines great rebounding with speed and power that can push Butler into a fastbreak opportunity off of a simple missed shot. This faster-paced offensive style suits many of the players on Butler’s roster as well, and it showed tonight. Lukosius is very good in fastbreak opportunities — his combination of size and passing IQ gives Butler great opportunities more often than not. It also allows Harris more space to pick his spots, and when he gets in a scoring groove, the Bulldogs are at their best.

“Our thing for the night was ball movement — everybody touching the ball,” Harris said after the game. “So, in the first half it was finding my open teammates, I was finding them, they were getting their open looks. Got us out to a comfortable lead and then I just found my shots where I could, when they came to me. I wasn’t forcing anything today, just letting it come to me.”

Pushing teams on the fastbreak is not a trait that most Butler teams have, and this team specifically has one of the slowest offensive paces in college basketball. But this newer strategy of quick possessions and more fastbreak opportunities gives a, generally speaking, poor shooting team more chances at easier shots.

Jordan also has shrunk the rotation in recent games, and last night Lukosius and Jayden Taylor were the only Bulldogs to play significant minutes off the bench. This seven-man rotation seems to consist of the players Jordan trusts the most to produce on both ends of the court, and the early returns of the new starting five and short bench have given optimism to a Bulldog fan base that was starting to get antsy.

Return to the fundamentals

Over the course of the last month, Butler had struggled in three fundamental parts of the game — free throw shooting, rebounding and consistent defense. For the moment, last night’s contest put those concerns aside.

In the nine games prior to Creighton — a stretch where Butler went 2-7 — the Bulldogs were outrebounded in every game, and by 10 or more in five of those games. Against a big Creighton lineup that features 7-foot-1-inch Ryan Kalkbrenner, the Bulldogs outrebounded the Bluejays 40-30. After the game, Jordan commended his players’ efforts on the glass.

“I thought our bigs did a really good job, you know Kalkbrenner is a big man, so Bryce and Bryce and D.J. subbed in there,” Jordan said. “[Kalkbrenner] gets the bulk of their offensive rebounds, and I thought those guys did a good job of going and hitting ‘em. And then, Bo had five defensive, Chuck had four defensive — our wings and guards had to come flying in to grab the ball. Which was good to be able to get out and push the fastbreak a little more.”

It was clear from watching the game that rebounding the ball was a priority for Butler. More often than not there were two Bulldogs jumping up for a rebound, with another boxing out a Creighton big. This is the effort necessary to — at the very least — stay even on the boards, as Butler’s bigs will be outsized in virtually every Big East matchup.

Part of the reason the team was able to be successful on the boards was the excellent team defense, particularly on the perimeter. Butler held Creighton to an abysmal 2-22 from deep, contesting nearly every shot while simultaneously staying sound — for the most part — on the interior versus Kalkbrenner and co. Harris, who is known more for his offense, played an excellent game defending the perimeter, as did Thompson, Hodges and Taylor. Golden and Nze were beaten a few times in the post, but it’s not exactly easy to defend a 7-footer.

One of the most frustrating aspects for fans has been the poor free throw shooting — just 69% as a team on the year. Recent 18-29 and 14-22 free throw shooting in the two games versus UConn leave a lot to be desired, but 12-14 from the line against Creighton is a good place to be. Lukosius hit all six of his attempts last night and is now up to 89% on the year, which gives him a lot of upside in crunch time. Thompson is still under 50% on the season and Nze is just above that mark, but regardless the numbers today were promising.

Bottom line is Butler got back to its fundamentals today, and it paid off. They shot the ball well, played great defense, made rebounding a priority, played with energy and intensity, and hit shots from the charity stripe. All of these aspects have been teased in previous games, but they put them all together versus Creighton and it resulted in a dominant win. Time will tell if the Bulldogs can keep this up in the long run, but this game can be a launching pad for a much better second half of the season.

The Bulldogs will be back at Hinkle Fieldhouse on Saturday, Jan. 29, for a rematch with a Georgetown team they defeated in D.C. two weeks ago. Then, the team heads down to Cincinnati for a matchup with archrival Xavier on Feb. 2.

With Butler playing just two teams currently ranked in the AP Top 25 in the next seven games, a near-perfect opportunity lies ahead for the Bulldogs to climb back up the ranks of the Big East — if the team can play to the level they did versus Creighton.