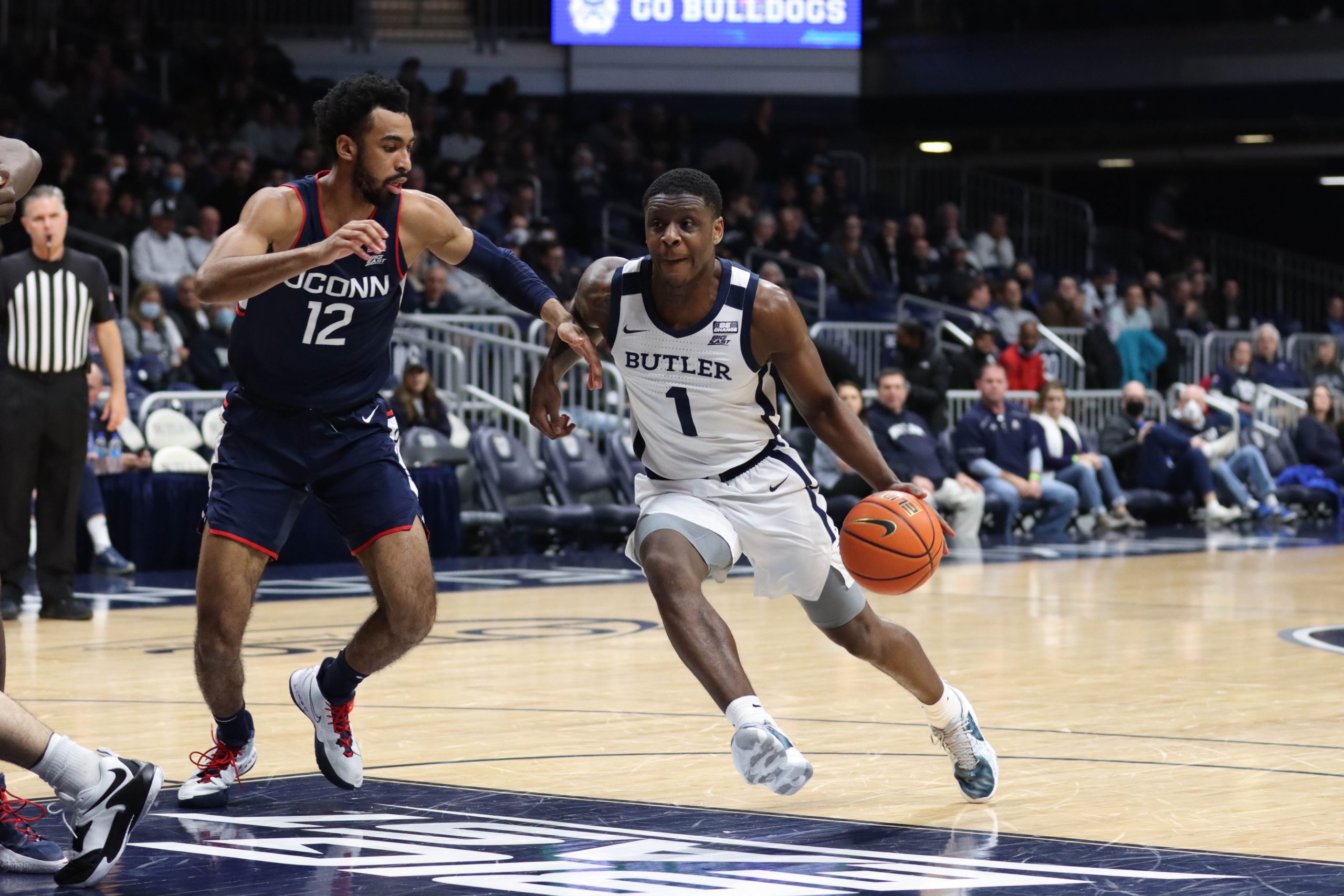 Bo Hodges drives through the paint against Tyler Polley in Butler’s 75-56 loss to the Huskies on Jan. 21. Hodges provided good energy off the bench along with four points and four rebounds. Photo by Francie Wilson.

For the second time in 48 hours, the Butler men’s basketball team lost to UConn, this time at home, 75-56. Chuck Harris led Butler in scoring with 16 points and Aaron Thompson added 10 points and five assists. Tyrese Martin led the Huskies with 27 points, 25 of which came after halftime. Butler falls to 9-9 overall this season and 2-5 in the Big East.

While the score line indicates this game was a blowout, it is very misleading. The Bulldogs led by four at halftime, and with 4:18 remaining in the game, were only down 57-52. What followed was utter UConn domination, but for 36 minutes, Butler was toe-to-toe with one of the 25 best teams in the country.

Ultimately, this game was a tale of two halves — one in which Butler played possibly its best basketball of the season, and one where the wheels came off at the end. Let’s go beyond the box score in a promising, yet disappointing defeat.

For the first 20 minutes of this game Butler looked like the better basketball team. The Bulldogs went with a familiar starting five — Thompson, Bryce Golden, Bryce Nze, Jair Bolden and Jayden Taylor — but that lineup did not last long. After a rough first two and a half minutes, including three turnovers in the first four possessions, head coach LaVall Jordan made an immediate switch, bringing on Simas Lukosius and Bo Hodges for Bolden and Taylor. Bolden did not play the rest of the half.

This move worked, as Butler was able to somewhat match the size and athleticism of UConn while maintaining two primary ball-handlers in Lukosius and Thompson. Butler tied the game at seven with two Thompson layups and a Lukosius 3-pointer, and then Chuck Harris checked in.

The offensive returns for Harris have been more misses than hits this season, but he played an excellent first half. Immediately upon checking into the game, he got fouled on a drive and sank his free throws, and a couple minutes later followed a Husky 3-pointer with a layup to give Butler a three-point lead with about 10 minutes to play. Later in the half, he hit two threes, one off a nasty step back, and gave Butler a 26-22 lead.

Thompson scored a layup in the last minute of the half, and UConn’s Martin returned the favor with a floater with nine seconds left — scoring his first points of the game and a sign of what he had in store for the second half.

Ultimately, the first half went near-perfectly for Butler, especially on defense. After making the early switch away from Bolden and opting for more size, the Bulldogs shut down UConn’s offense. Butler held the Huskies to 10-35 shooting from the field in the first half and just 2-11 from three. The Bulldogs played with a ton of intensity — closing out on Husky shooters, chasing loose balls and boxing out one of the best bigs in the country, Adama Sanogo. Hodges contributed a lot to this intensity and may have been the sparkplug player this team has been missing all season.

This effort kept Butler relatively even in the rebounding department, something that was a major concern given the team is near the bottom of Division I in rebounding and UConn is near the top. Yet, Butler was still outrebounded 22-19, which isn’t nearly as impressive given UConn missed eight more shots than Butler.

The only thing that would’ve made the first half better was if the offense made a few more shots. As a team, Butler shot 39% from the field and 25% from three, which somehow is an improvement on the last few games. The Bulldogs were able to get mostly good shots off against a stout Husky defense, but if a few more fell through and Butler had a 10-point lead at half, this could have been a much different outcome.

While this is a story of two drastically different halves, the second half started much like the first. Nze scored just 15 seconds in, the last points the team would score for the next four minutes. Over that span, UConn went on an 11-0 run, sparked by a Martin 3-pointer, and took a 35-30 lead. Jordan started the half with the starting lineup but took out Bolden halfway through the Husky run and that was the end of his night.

Butler scored back-to-back baskets to cut the lead to one at the 15-minute mark, but Martin hit a 3-pointer immediately after, which came to be the story of the half. Every time Butler would cut into the lead, UConn, and specifically Martin, would hit a big shot.

With a little under nine minutes to play and Butler down seven, Aaron Thompson drove to the rim and got fouled hard on his layup attempt. It was unclear at the moment exactly what happened, but he remained on the ground with his teammates surrounding him, clearly in pain. He was helped off the floor by a trainer and taken to the locker room, and with time ticking off the clock, it appeared his night was done.

Aaron Thompson suffering serious pain in his shoulder after a hard drive to the rim. Thompson returned to the game shortly after the incident. Photos by Francie Wilson.

However, just around two minutes of gametime later, Thompson returned and appeared completely healthy. After the game, Thompson said his shoulder “just got jammed up” and he feels fine now.

Once Thompson returned, Martin hit a jumper to bring the Husky lead to 10, but a Golden 3-pointer and two Lukosius free throws cut the lead to five with four minutes to play. Then, Butler fell apart.

The Huskies went on an 18-4 run in the last four minutes, eleven of them coming from Martin. It’s difficult to put all the blame on Butler’s defense for allowing Martin to get scorching hot in crunch time because sometimes that just happens no matter how much attention you give to an opposing player. But the offense completely fell apart. All of the good offensive plays Butler was running before turned to chucking up threes and praying they would fall. Not a great strategy for a team shooting 31% from deep this season.

The entire second half, Butler lost all the momentum the built in the rebounding department too. The team only grabbed six rebounds in the final 20 minutes, while UConn grabbed 17. Jordan said one reason for this disparity in this game was his team missed a lot of shots, creating lots of defensive rebounding opportunities for UConn, but regardless his team must do better on the glass.

Ultimately, this was a game Butler could have won. While that is a somewhat promising idea, the fact is the team folded in crunch time, and that cannot happen in order to beat top teams in the Big East.

While this is undoubtedly a tough loss to swallow, Thompson said that there are positives to take away from the game and the team just needs to come together and keep pushing.

“I just think we gotta stick with it,” Thompson said. “Just coming to practice every day with the same mindset that we’ve had. Like I said earlier, this score is not a reflection of how that game went. I think we definitely have improved, especially from last game. I think this game was a little bit more competitive than last game, they just pulled away a little bit at the end. So just keep coming to practice and show up every day, and just do it for each other.”

Butler will be back on the road this Sunday, Jan. 23, with a tough matchup versus current AP No. 21 Providence. Providence is 11-0 at home this season and currently sits atop the Big East standings.

Butler will then have back-to-back home games with Creighton on Jan. 26 and Georgetown on Jan. 29. The Bulldogs will need to start winning these games, particularly at home, to break out of this rough stretch where the team has lost five out of the last six games.