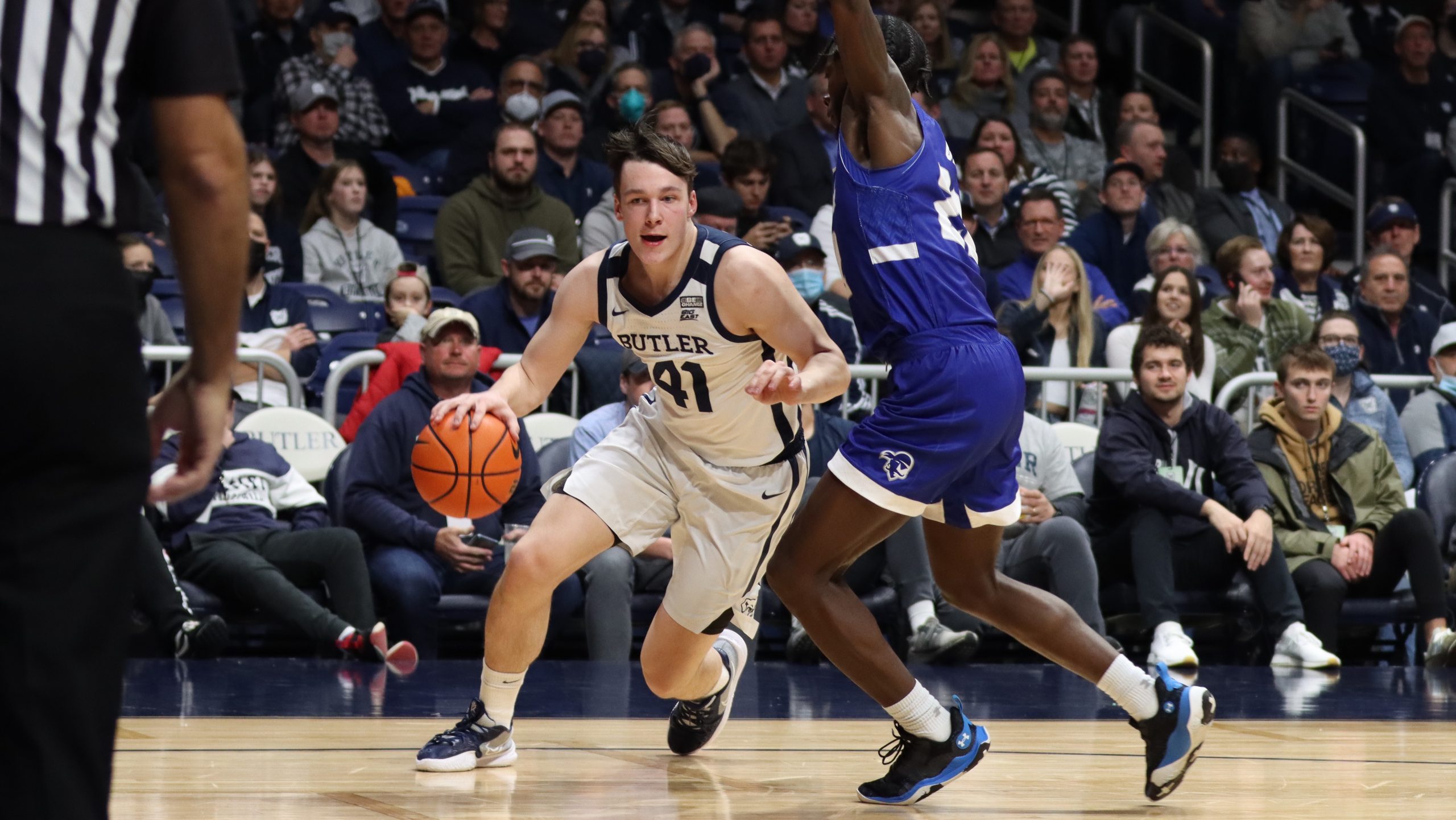 Freshman guard Simas Lukosius dribbles past a Seton Hall defender in a matchup on Jan. 4. Lukosius posted a career-high 17 points in the Bulldogs 76-59 loss to the UConn Huskies on Jan. 18. Photo by Francie Wilson.

The Butler men’s basketball team ends their three-game road trip with a 76-59 loss to the UConn Huskies. The Bulldogs are now 2-4 in conference play, as the Huskies improve to 3-2.

Jayden Taylor led the Dawgs in scoring with 19 points. Simas Lukosius wasn’t far behind as he posted a career-high 17 points. The freshman duo also combined for all five of Butler’s three-pointers, as the rest of the team went 0-for-5 from beyond the arc. Bryce Nze finished with eight points and seven rebounds and Aaron Thompson also added 8 points.

The Bulldogs started the game with a high level of defensive intensity, scoring the game’s first basket and allowing only four points in the first five minutes of play. The Huskies would respond with a string of defensive stops of their own, going on a 10-0 run and never trailing the remainder of the game. A combined 29 first-half points by RJ Cole, Tyler Polley and Andre Jackson created a wide enough gap to sustain a UConn lead, and it didn’t help that Butler seemed to be incapable of accomplishing back-to-back defensive stops.

Let’s go beyond the box score to unpack why Butler failed to pick up a win in the XL Center.

Abysmal shooting, especially around the rim

While this of course is a recipe for defeat, what really hurt the Bulldogs was their inefficiency to finish at the rim. Out of their 41 missed shot attempts, five of them were missed layups and eight were blocked at the rim — it’s worth noting that UConn had 10 blocks in the game.

While this makes it seem like Butler was just not finishing at the rim, a disclaimer is definitely appropriate here. UConn is very good defensively and ranks second in the nation in blocked shots per game. This is an area that people were expecting Butler to struggle in during this game, but maybe not to this degree.

Battle for rebounds was not a fair fight

Another area of the game that the Bulldogs were ruled an underdog in was rebounding. UConn ended up out-rebounding Butler 49-39, 16-14 on the offensive glass. On the surface, the margin between the two teams wasn’t necessarily that bad. However, that overshadows what has been a weakness of the Bulldogs and a strength for the Huskies all season. To put this into perspective, UConn ranks seventh in total rebounds per game. Butler ranks 336th in the same category. This type of play on the boards can’t continue if Butler wants to turn things around.

Up next for the Bulldogs is their second meeting with UConn, only this time they will be at home. Tip-off will be 9 p.m. on Jan. 20. Butler then travels to Rhode Island for a matchup with No. 21 Providence on Jan. 23 before coming back home for two straight home games. They’ll face Creighton on Jan. 26 and close out the month against Georgetown on Jan. 29.