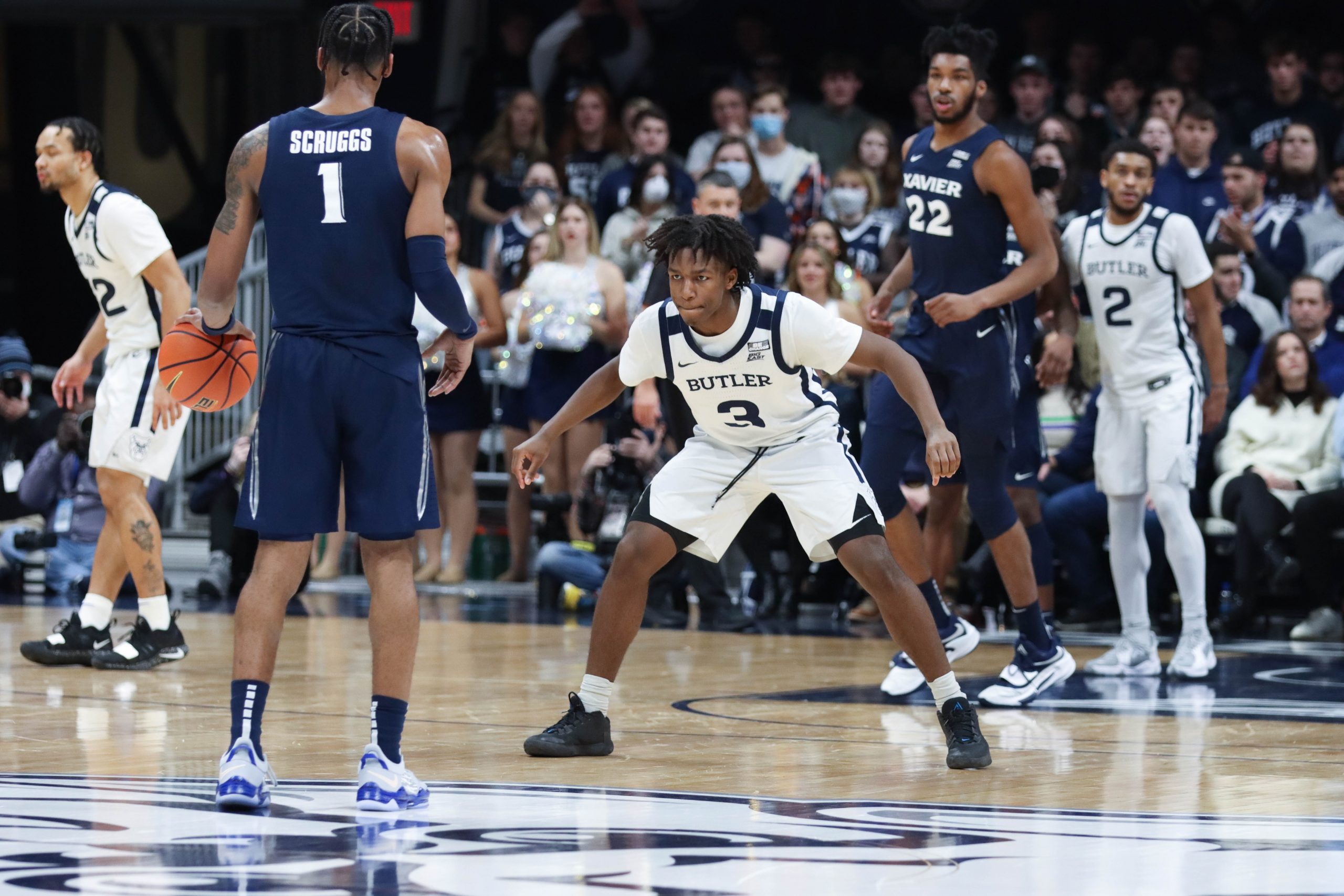 Chuck Harris gets in his defensive stance against Xavier’s Paul Scruggs in Butler’s loss on Jan. 7. Harris scored nine points and dished out two assists in Butler’s win over Georgetown on Jan. 13. Photo by Francie Wilson.

While Butler shot the ball poorly from the field, the Bulldogs were able to completely neutralize Georgetown’s top two scorers. Butler held Aminu Mohammed and Kaiden Rice to a combined 12 points on 3/25 from the field and 1/10 from three. This, coupled with two Georgetown starters missing the game, resulted in a near-season low in points for the Hoyas.

After a disappointing defensive performance against Xavier on Jan. 7, the Bulldogs got back to their bread and butter in last night’s win. Let’s go beyond the box score as Butler is back to .500 in the Big East.

The Bulldogs have not been playing their best basketball as of late but showed signs of a much more cohesive team in last night’s win. The defense played very well, limiting the Big East’s best 3-point shooting team to just 3/16 from deep.

After letting up too many open looks to Xavier — and getting punished from beyond the arc as a result — Butler’s strategy was clearly to limit Hoya looks from deep, and the game plan was executed to a near-perfect level. It hurt Georgetown’s chances to make these shots with two starters out, but the Bulldogs can only play who is in front of them.

The other part of the defensive gameplan — no easy shots for Georgetown’s leading scorer, freshman Aminu Mohammed. The Bulldogs focused on not giving Mohammed any easy looks driving to the hoop, which is especially difficult when also trying to guard the perimeter. Mohammed went 2-16, his worst game of his collegiate career to date, with much thanks given to the Butler defense.

The offensive side of the ball was not quite as well executed, but the looks were much better than in previous games. The Bulldogs generated a fair number of open shots, just did not hit them at a high rate. The team combined to shoot 39% from the field and 29% from the field, which would normally result in a loss unless the defense plays exceptionally well, which they did.

Arguably the most promising sign for Butler is shooting 17/19 from the free throw line. Free throws aren’t sexy, but they are a crucial part of the game, especially for protecting leads. For a team that struggled massively with free throws last season, shooting nearly 90% from the line on the road is a huge development if it can continue.

The return of Bo Hodges means the Bulldogs are finally fully healthy — minus the inevitable COVID-19 protocol absences. Head coach LaVall Jordan now has the full team at his disposal and can adjust the rotation accordingly to find the best lineup for each opponent. It will take time for Hodges and Myles Tate to get fully back to their former selves but having everyone available is hugely important for a team that was defined by depth and experience coming into the season.

The Bulldogs have no time to celebrate this win, as Butler faces its toughest test on Sunday, Jan. 16, as the team heads to Philadelphia to take on No. 14 Villanova. The Bulldogs will have to be nearly perfect to come away with a win versus one of the country’s best teams, but even a close loss could build momentum heading into the meat of the Big East schedule. After Villanova, Butler has back-to-back games versus UConn, first on the road on Jan. 18, and then at Hinkle Fieldhouse on Jan. 20.