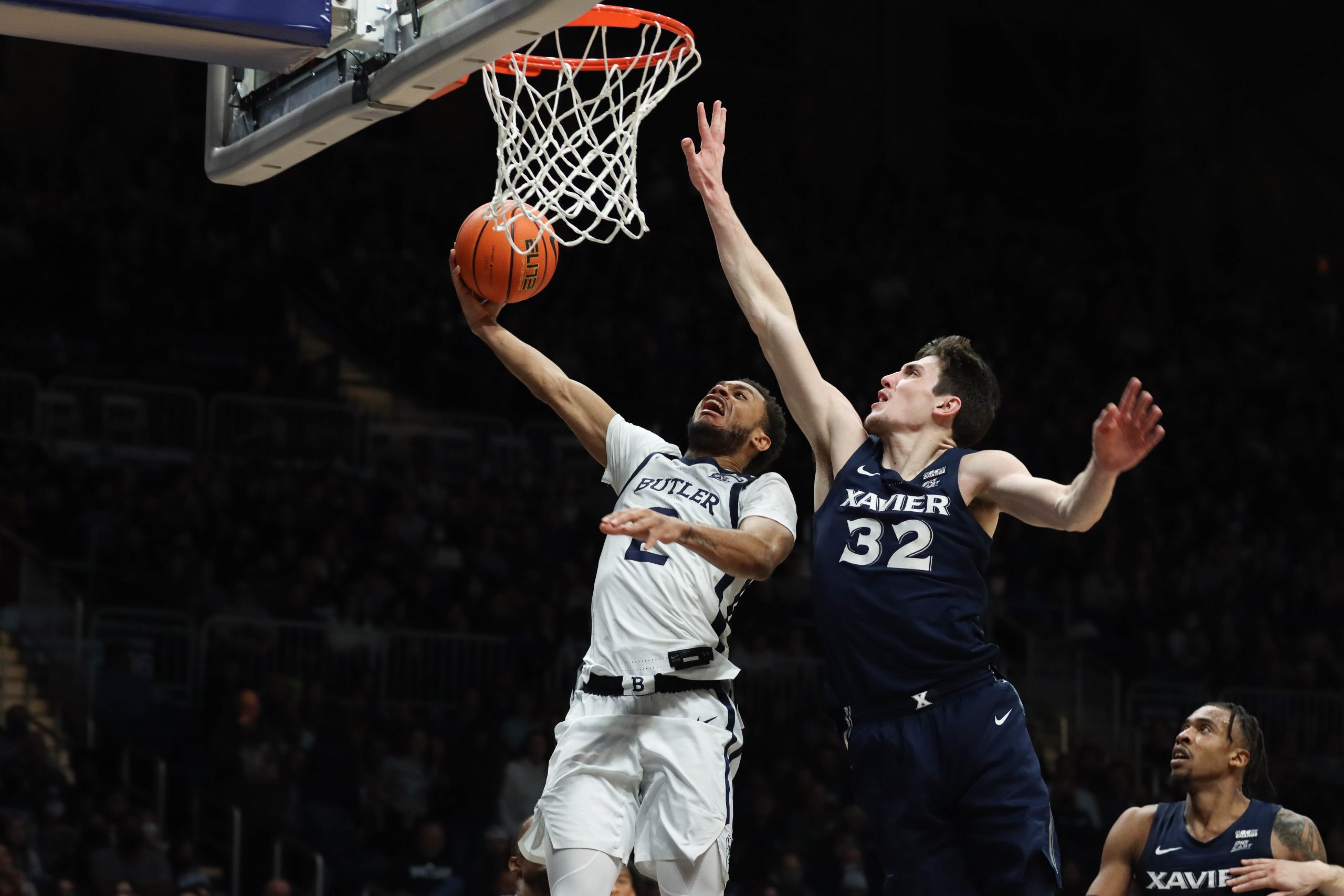 Aaron Thompson drives hard to the rim and finishes a layup over a Xavier defender in Butler’s 87-72 loss on Jan. 7. Thompson finished with 20 points and four assists. Photo by Francie Wilson.

The Butler men’s basketball team lost 87-72 to Xavier last night at Hinkle Fieldhouse. Aaron Thompson poured in 20 points, his second-highest scoring game for Butler, and Bryce Golden continued his hot streak with 19. The Bulldogs now sit at 8-6 overall and 1-2 in the Big East.

While Butler’s offense was the concern heading into this game, it was the defense that struggled mightily. 87 points is by far the most points the Bulldogs have given up this season, and the team looked lost at times trying to defend a clicking Xavier offense.

This is by no means what Butler fans were hoping for in this game, but the silver lining is the mistakes on defense are fixable. The offense playing well may represent hope for turning the season around, but the Bulldogs need to play well on both sides of the court to truly compete in a stacked Big East.

Golden and Thompson spark the offense

It’s no secret that Butler’s offense has been struggling. The team hadn’t hit 70 points — excluding the game versus Division II Chaminade — since Nov. 13 versus Troy. That puts a lot of pressure on the defense to play at an elite level, and if they don’t there is only a slim chance of coming out with a win.

Despite these struggles as of late, Golden has completely turned his season around and is currently Butler’s most consistent scorer. After dropping 19 last night, he has now scored double digits in seven of the last eight games, the lone exception coming against DePaul when he got into foul trouble and played only 18 minutes. Golden has been efficient too — he has not shot lower than 55% over this stretch. While he is a liability at times on the other end of the floor, he has to play big minutes because of the presence he has in the post offensively and seems to be the only Bulldog to consistently get buckets.

While Golden is scoring at a high level, Thompson has been Butler’s best offensive player this season, and he showed that last night. Thompson usually does not take it upon himself to score, but there is no doubt that he can get to the basket against anyone. His 20 points came on 9-10 from two, most of which were him driving hard to hoop and making a tough layup. With seemingly all the other guards on cold streaks, Thompson may have to continue to score rather than drive and kick to keep the offense alive.

Speaking of cold streaks, what is going on with Chuck Harris? Before scoring five points late in the second half after the game was out of hand, it seemed like he was headed for a second consecutive game without scoring a point. This seems impossible after watching him score 26 in the overtime win at Oklahoma, but Harris has been cold all season — he is shooting just 34% from the field and 32% from three. It is too early to call this a sophomore slump, but this is not a good sign from last year’s leading scorer.

Where did the defense go?

Great defense has come to define the Butler basketball program and is the bread and butter of what they want to do. That was NOT on display last night.

Miscues and mental lapses early on allowed Xavier too many looks from three, and subsequently allowed the Musketeers to get into an offensive rhythm that, once unleashed, could not be stopped. Xavier hit six 3-pointers in the first half and shot 60% from the field and would have put the game out of hand at that point if not for Golden and Thompson’s brilliance on offense.

Xavier is a very good offensive team, and this was always going to be a tall task for Butler’s defense, but the Bulldogs looked lost. Once Adam Kunkel started heating up in the second half, they still were allowing him to get wide open looks, and Kunkel took advantage, scoring 18 of his 25 points after halftime.

The only positive aspect of the first half was Butler kept the Musketeers off the foul line. That went out the window in the second half, as Xavier turned two first half free throws into 27 at the end of the night.

While there are definitely concerning aspects of the performance last night, Golden said that the mistakes can be addressed and fixed quickly.

“I think the effort was there tonight, just playing smarter,” Golden said. “Things we can clean up, that’s the best thing about it is they’re all things we can fix. It’s nothing that is out of our control, it’s all playing smarter and knowing who’s on the court, knowing who you can help off of, being in the gaps and stuff like that. So as long as we can clean those things up, there are 17 conference games left, and we’ll be right there at the end of it.”

Injury updates and looking ahead

During the first possession of the game, it seems Bryce Nze hurt his already injured left shoulder throwing a simple pass. He stayed in the game though and hit a three shortly after. A torn labrum is a painful injury — I have torn both of mine — and can be reinjured in an instant. However, it can be played through, and it seems like that is what Nze is going to do for the rest of the season.

After the game, head coach LaVall Jordan said Ty Groce should be back next week after his time out in health and safety protocols, and it is just a matter of getting him back in condition. He added that without any setbacks, Bo Hodges should make his season debut at around the same time.

These returns come at a critical time as Butler is set for a brutal three-game road trip. First up is reigning Big East Champion Georgetown on Jan. 13, followed by No. 19 Villanova on Jan. 16 and Connecticut on Jan. 18.