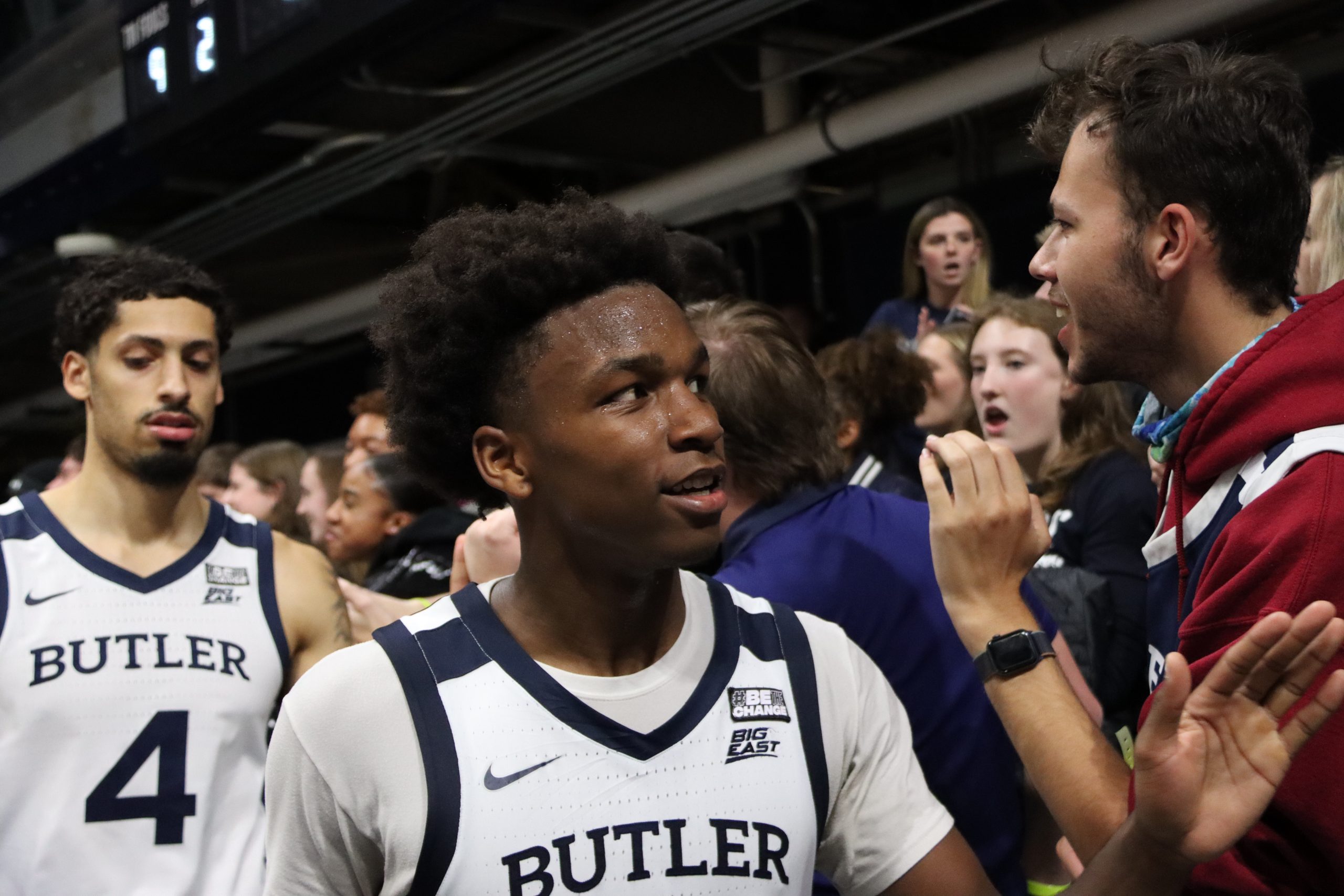 The Butler men’s basketball team secured the win over Troy 70-59, moving to 3-0 on the season. Chuck Harris led the way with 23 points on nine of 14 shooting and four for six from three — he played all but 82 seconds. Jair Bolden added 21 points off the bench, shooting a lights out four of five from deep.

After a head-scratching 14 turnover first half, the Bulldogs locked in for the second half and pulled away late, thanks in large part to Harris and Bolden’s playmaking. The defense played well again and the team outrebounded Troy 35-21 despite the Trojans size advantage. In what was a wild game in many ways — including the absurd Bryce Nze 80-foot buzzer beater to go into halftime — the Bulldogs yet again found a way to win in a game they didn’t play well in.

Let’s go beyond the box score for the Bulldogs third win of the season.

The Bulldogs trotted out the same starting five — Harris, Nze, Bryce Golden, Jayden Taylor and Simas Lukosius — as they did the first two games, but head coach LaVall Jordan didn’t stick with the lineup for long. The Bulldogs had 12 turnovers in the first 12 minutes, and with four of them coming from Lukosius Jordan moved almost completely away from the Lithuainian freshman.

Golden only played 15 minutes, registering just one rebound and no points. It wasn’t a great matchup for him, as the Troy big men were seemingly longer and faster. To replace Golden’s minutes, Jordan went with Myles Wilmoth, who yet again provided a spark off the bench. Wilmoth and Bolden proved to be huge contributors in the game, and their presence and energy off the bench fueled the team to get back into the game after falling behind 10 early. After the game, Jordan talked about the importance of those two players and their roles on the team.

“I think Jair and Myles have really bought in and embraced their roles coming off the bench and providing a spark,” Jordan said. “Obviously when [Bolden] makes shots, you see the bench’s reaction and his teammates love it and it gives us a boost. When [Wilmoth] is in there making big plays on the defensive end, energy plays, going to the offensive glass — he’s bought into being that guy for us and that’s a huge role.”

Behind Harris, Bolden and Wilmoth, Butler climbed back into the game, down three as Troy was preparing to take the final shot. They took the shot a bit too early, missed, and Nze grabbed the rebound and threw a line-drive pass to the other end of the floor, and by the grace of Hinkle magic, it banked in.

It was an ugly first half, but the Bulldogs defense is the only reason Butler was still in the game after 20 minutes. They held the Trojans to 35% from the field and just one of 11 from three, and did not allow a single free throw attempt in the first half. The team locked down when they needed to, and it’s clear that this team can only go as far as the defense will take it.

It was a difficult matchup for the Bulldogs because of Troy’s aggressive, physical nature and their size advantage over Butler’s bigs. This length made it very difficult for Butler to get shots in the paint, but they managed to keep Troy out of the paint too and force a team that is not adept to shoot to take difficult shots. The Bulldogs defense is not flashy, does not generate many blocked shots or an absurd amount of steals. Yet, they are very sound in their assignments, let up very few open looks and force teams to take bad shots. This style will only improve when the defensive pest himself — Aaron Thompson — returns on Wednesday from his three-game suspension.

Butler’s defense is the foundation of the team, and Jordan is able to play with a bunch of different lineups that make it so they can play small or big and still be sound defensively. The defense is what will keep them in games versus the tough opponents — starting versus Michigan State on Wednesday — but can the offense stay consistent enough to win those games?

Harris and Bolden were simply fantastic tonight. They combined to shoot eight of 11 from deep, and despite a horrendous 21 turnovers as a team, the pair only combined for four of those. Harris was excellent handling the ball In Thompson’s absence, so much so that Troy’s head coach praised him after the game. He was on the floor for almost every second in the game, and Butler needed him for every single one. He is turning into Butler’s most important player before our eyes, and a backcourt of him and Thompson will be difficult for any team in the country to handle.

After a quiet first two games, Bolden proved his value to the team today. Not only did he make important shots and score 21 points — which tied his career high as a Bulldog — those baskets fired up the Hinkle faithful and gave the team a boost of energy. Bolden has accepted his role as a sixth man coming off a season he started nearly every game in, and wants to do whatever it takes to help the team win.

“Whatever coach wants me to play, whatever position coach puts me in, I feel like I have success in,” Bolden said. “Whatever role I’m in, whatever will help the team win, that’s what I’m gonna try to do. So any position, any role, starting or not starting, I’m gonna give that all my effort.”

For both Bolden and Harris, this is their first season with a full Hinkle Fieldhouse. Harris said the impact from Bulldog fans has been a boost for the team.

“It’s definitely different from last year,” Harris said. “Especially for me, not really knowing what college basketball was. Just having that extra energy coming from the fans, helping us get through a tough stretch or something is definitely crucial to our team.”

Bolden, playing for his third different school in five seasons, agreed with Harris and said playing in Hinkle with fans is special.

“I’ve never played in a full Hinkle before, like Hinkle having fans,” Bolden said. “I’ve played in a lot of college gyms but there’s definitely Hinkle magic, something special about it. We feel that when we’re out there on the court, we feel like we gotta protect something that’s bigger than us.”