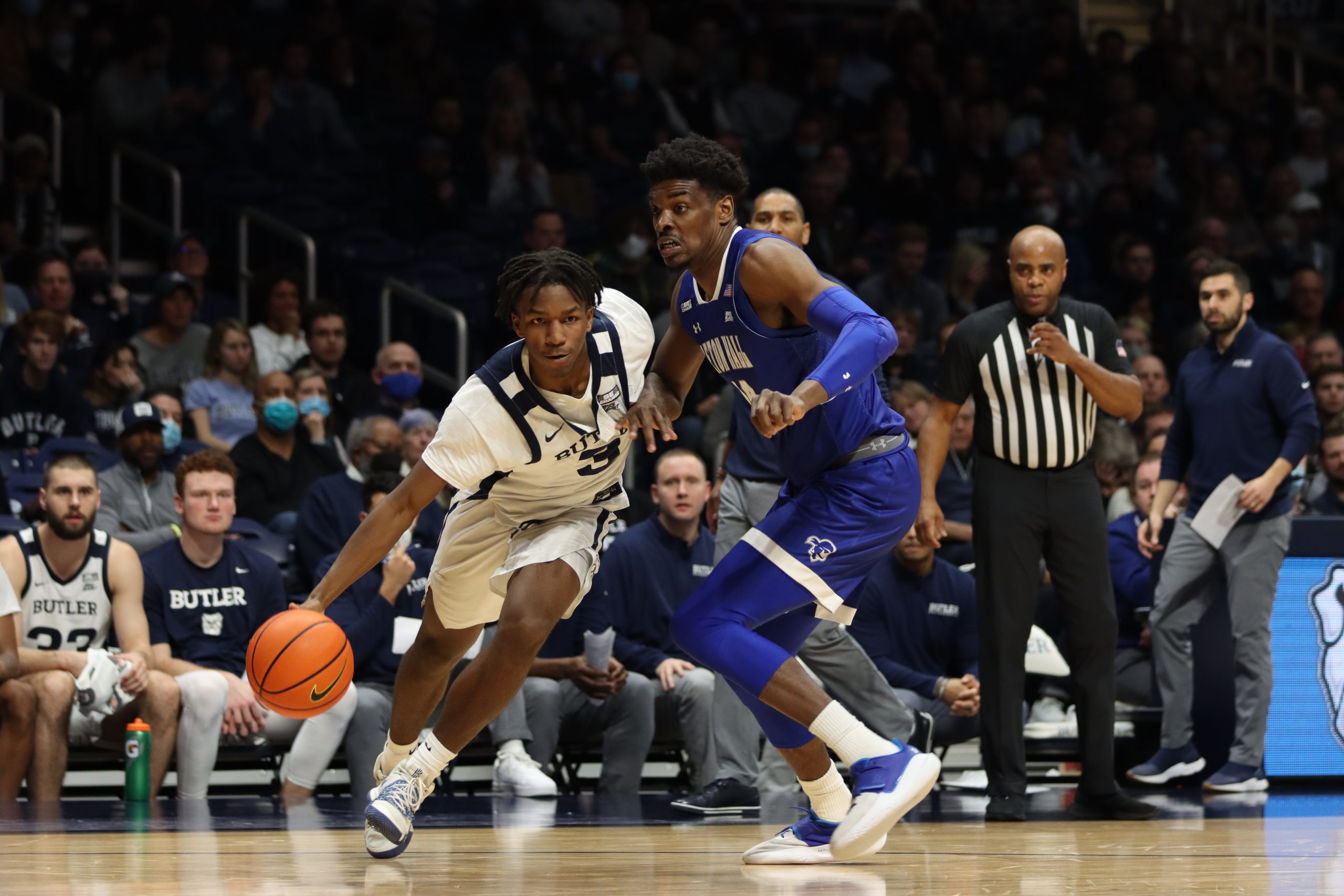 Sophomore guard Chuck Harris drives on a Seton Hall defender on Jan. 4. Harris had a game-high 21 points in Butler’s 69-62 loss to AP No. 21 Providence on Jan. 23. Photo taken by Francie Wilson.

The Butler men’s basketball team came up short of an upset in a 69-62 loss to AP No. 21 Providence. The Bulldogs stayed with the Friars step for step, and Providence didn’t put the game out of reach until the two-minute mark of the second half. The Dawgs played well on both ends for the most part, but the game came down to Butler’s inability to stop the Friars from getting points in the paint.

As some may have expected, there were a few lineup changes that definitely seemed to make this a close game. In his first start since Nov. 23, 2021, Chuck Harris led the team in scoring with 21 points. Bo Hodges had himself a game as well, ending his first start of the season with 17 points, eight rebounds, 2 assists and 2 steals. Bryce Golden also cracked double digits with 11 points.

Playing at what seemed like the fastest pace they have all season, the Bulldogs shot the ball at 47% from the field, their best in the last five games. For a team that usually settles into the half-court before beginning an offensive play, Butler looks like a totally different offense — which is a good thing — and was able to score in transition as well as off screens and off the dribble.

Let’s go beyond the box score in a game that resulted in a loss but was a couple of big plays away from an upset.

In just his 14th game with the program, Bo Hodges had arguably his best game in a Butler uniform. His 17 points on 8-for-12 shooting are the most points he’s scored during his time as a Bulldog. Hodges was scoring just about whenever he wanted. Known as more of a slasher, he was able to hit pull-up jumpers and even hit a contested 3-pointer.

His defense came up big too. He had two steals and a block to go with the physical presence that he brought to the wing and the paint. While Nate Watson ended up getting his 18 points, Hodges made him work whenever they matched up. It was a breath of fresh air to see some size and physicality in the lineup and after Hodges’ performance, there seems to be no reason why he shouldn’t remain a starter going forward.

Watson and company had their way in the paint

In a game with 13 lead changes, there needed to be one clear advantage that would push one team over the edge. The clear advantage in this one was points in the paint, in favor of Providence. The Friars scored 40 points in the paint, 14 of which came from Nate Watson. When he checked back into the game with 5:48 left in the second half, Watson outscored Butler by himself nine to four. Butler has struggled against physical and skilled bigs all season — Zach Edey and Adama Sanogo are some others — so it’s no surprise that they would struggle with Watson.

Another spot that Butler failed to contain was Providence’s bench. The Friars had 20 points off the bench, as Jared Bynum and Ed Croswell — who was a perfect 5-for-5 from the field — both scored 10 points each. If Watson was going to be a problem, then Butler had to make sure that no one else was firing off on all cylinders too. They failed to do so and thus were unable to crawl back into the mix late in the game.

History made for Providence’s Ed Cooley

While a loss was not at all what Butler wanted, something that both sides can commend was Providence head coach Ed Cooley’s 210th win. Cooley passed Hall of Fame coach and founder of the Big East conference Dave Gavitt for the second-most wins in Providence school history. With an overall record of 210-137, Cooley now only trails Joseph Mulaney — who went 290-147 in 16 seasons — for the most wins in program history.

Butler will return to action in Hinkle for a matchup with the Creighton Bluejays on Jan. 26 at 6:30 p.m.