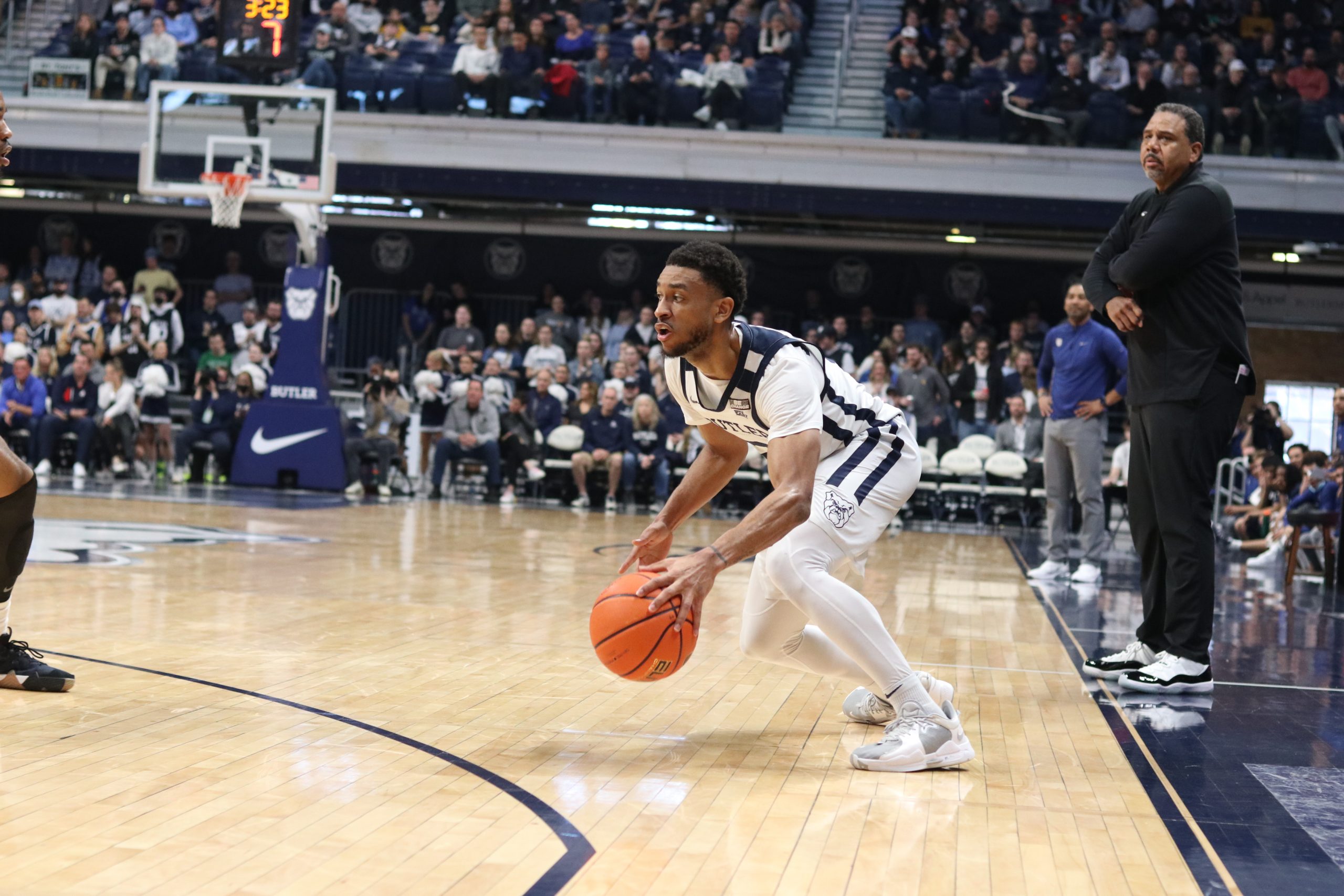 Aaron Thompson shot a perfect 6-6 from the free throw line against Providence. The six makes are tied for the most he has made all season. Photo by Francie Wilson.

On the Friars’ side, Nate Watson led the Friars in scoring with 22 points. Jared Bynum ended with 18 points, scoring 15 in the second half and three in overtime. Nate Horchler recorded 15 points and 11 rebounds, notching his eighth double-double of the season. It’s also important to note that Providence played their first game of the season without guard Al Durham — an important part of the team especially in late-game situations.

Butler led for more than 36 minutes in the game but was not able to keep Providence in check in the second half, as the Friars were able to force the extra time they needed to pull off the largest comeback by a Big East team this season.

This game was the second overtime in three games for the Friars. Head coach Ed Cooley said his team relied on trust amongst themselves to dig through long games like this one.

“Trust goes a long way,” Cooley said. “You need trust with your players, you need trust within your assistant coaches. You may not always get over the hump sometimes, but you can always come back to a situation where we’ve been in this before or we’ve done this before.”

Let’s go beyond the box score in a game that was a tale of two halves — adding in a wild overtime — that allowed the Friars to get over a pretty large hump.

Simply put, Butler looked dominant in the first half. They led Providence in just about every statistical category and held them to their second-lowest scoring half of the season. The Friars went 7-30 from the field in the first and made just two of their 12 three-point attempts. For a team that normally makes 44% of their shots, they were not falling at all. Part of it was Butler’s aggressiveness on defense — they forced five turnovers leading to 11 points off of them — while the other part was that Providence flat-out couldn’t buy a basket.

Offensively, Butler was firing on all cylinders. After Nate Watson scored the first four points of the game for Providence, he was subbed out three minutes into the game. Butler looked at this move as their opportunity to capitalize, and they did just that. The Dawgs ripped off a 21-4 run and led by 13 at half. Seven different Bulldogs scored in the first half and the team shot a combined 14-27 from the field.

Coming out of halftime, everyone in the stadium knew that Providence would not continue to shoot as poorly from the field than they did in the first. Butler was going to have to keep making shots and not allow any easy buckets for the Friars if they wanted to hold on to the lead. At first, they did just that.

The Bulldogs would open up their lead to as many as 19 points and it started to seem like  Butler could go wire-to-wire in the contest. As if it was right on cue, Providence began to stage its comeback after calling their last timeout of the game with over 16 minutes to play. Nate Horchler and Jared Bynum started hitting big shots in the second half, and Butler went cold just long enough for Providence to cut it to single digits with 7:36 left. A few minutes later, Providence had the lead down to just five with just under four minutes to play.

What probably kept Providence from coming back sooner was their poor shooting from the free throw line. One play could sum up the day they had. After Bryce Nze was whistled for a  debatable foul on a three-point shot by Justin Minaya, he would proceed to miss all three free throws. The Friars went 5-12 in the second half of the game and they would end the game shooting 12-24 overall from the line. To make things even weirder, Aaron Thompson — who’s been shooting 59% from the charity stripe this season — was a perfect 6-6 from the line. Thompson credited his confidence and teammates for his success at the line.

“I’ve just been more relaxed at the line,” Thompson said. “Just come step up, take a deep breath, and go up and knock it down … I just go up there with confidence and my teammates help me. When I go up to the line, my teammates are talking to me and I’m shooting them in for them.”

Regardless of the Dawgs’ success at the free throw line, the Friars still roared all the way back. Noah Horchler would make a huge jumper for Providence to tie it at 64 with 23 seconds left, following it up on the other end with a block to force overtime.

You could tell right away that both teams were desperate for the win going into the third period. The first four minutes were like a heavyweight title fight, both teams throwing gut-punches at each other. With 1:01 remaining, Chuck Harris made a tough layup to take a 70-69 lead.

Going down on the other end, Jayden Taylor played tough defense on Jared Bynum as he drove to the hoop for a layup before getting blocked by Taylor. However, the whistle was blown and two foul shots were given to Providence. Bynum would knock down both to take a 71-70 lead. On the ensuing possession, Harris would lose the ball and have to foul Bynum again. This time he would come up empty from line, meaning that Butler would have 20 seconds after a timeout for one final shot.

In Butler’s final possession, Chuck Harris drove into the paint, drawing in two defenders. Harris planted in the paint, pivoted, and kicked it out to a wide-open Jayden Taylor at the top of the arc. Taylor squared up and fired up the shot. The ball went up … and hit the backiron. Horchler grabbed the rebound and Providence played keep-away for the remaining eight seconds to secure their come-from-behind victory.

Following the game, the entire arena — minus the Providence section of course — was sitting in shock and disbelief. It was evident how much Butler wanted to pull out the win, and Chuck Harris was visibly upset. His teammates came over to console, likely giving words of encouragement to the sophomore Bulldog who had left it all on the floor. Players and coaches from both teams were chatting and showing respect to the efforts both teams had given.

Scenes of Butler and Providence following their overtime game on Feb. 20. Photos by Francie Wilson.

In the postgame press conference, head coach LaVall Jordan shared the first thing he told his team following such a devastating loss.

With the loss, Butler drops to 13-15 overall and 6-11 in conference play. Providence rises to 22-3 overall and 12-2 in conference play. The Bulldogs have three regular season games remaining. They will travel to New Jersey to face Seton Hall on Feb. 23, head to Wisconsin to play Marquette on Feb. 26, then end with senior night at home versus Villanova on March 5.