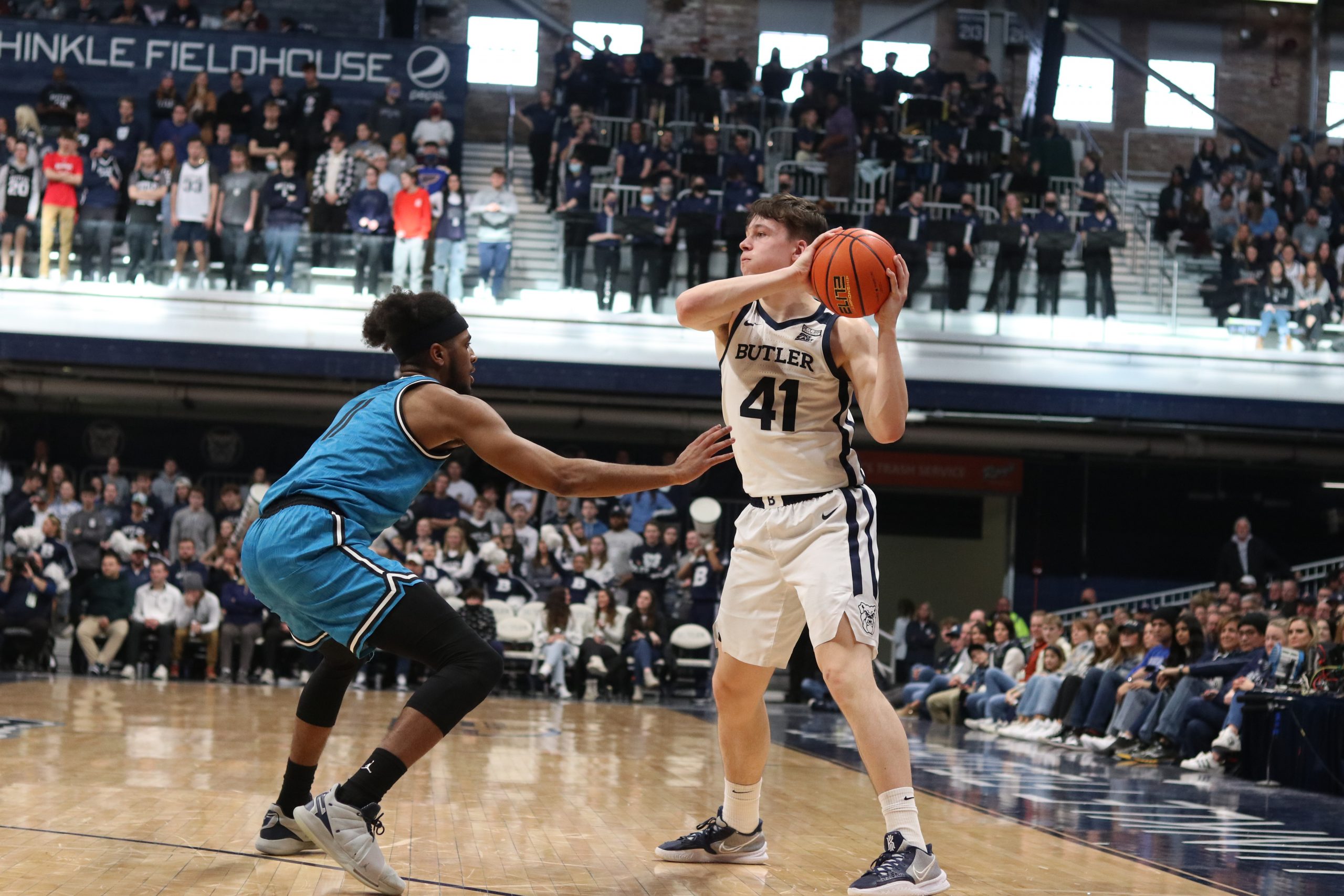 Simas Lukosius looks for a pass in Butler’s win over Georgetown on Jan. 29. Lukosius was named Big East Freshman of the Week at the end of January for the second time in a month. Photo by Francie Wilson.

The Butler men’s basketball team fell just short of a comeback last night, losing to No. 21 Xavier 68-66. Jayden Taylor and Chuck Harris had 18 points each, while Xavier’s Zach Freemantle scored 23 for Xavier, the only Musketeer in double digits.

With six minutes to play, Butler trailed by 14 points but cut the lead to four with just under a minute left. Xavier’s Colby Jones missed a jumper, but the Bulldogs failed to grab the defensive rebound and sent Freemantle to the line.

On the next possession, Simas Lukosius secured an offensive rebound and scored a put-back layup, picking up a foul in the process. Lukosius had a rare miss at the free throw line, Taylor grabbed another offensive rebound and Harris missed an open floater which would have cut the lead to two with eight seconds left, essentially winning Xavier the game. Xavier went one of two at the line and Jayden Taylor hit a 3-pointer at the buzzer to make the score look closer than it was.

Xavier played better for most of the game despite shooting poorly from three, but Butler did not give up. Ultimately, two technical fouls, missed assignments on the interior against Freemantle and untimely turnovers halted Butler’s comeback. Yet, the Bulldogs showed they can compete with top teams in the country even when mistakes are made.

Let’s go beyond the box score as the Bulldogs fall back to .500 on the season.

The three Bulldogs in double digits, Aaron Thompson, Harris and Taylor, combined for 48 points on 19/34 shooting from the field and 5/12 from three. After scoring no more than three points in the past four games, Taylor found his groove. He got open from beyond the arc and made three 3-pointers, as well as two and-one layups in the second half that built momentum. Taylor played with energy throughout the game, helping fuel the teams near comeback.

Harris has been inconsistent this season but played one of his best offensive games against Xavier. This was the fourth time in the past five games Harris scored over 14 points, but the only time he shot over 50% from the field. Harris is starting to get into a groove offensively — finding his spots on the floor and getting to the rim better than he had been. Harris took multiple NBA-range 3-pointers but did not convert. The shots seem unnecessarily deep, but it does stretch the floor and force defenders to key in on him from nearly everywhere in the halfcourt.

Thompson made a few crucial mistakes in the second half, but his ability to drive right and get to the rim seems to be the most consistent way for Butler to score. Thompson did not attempt a 3-pointer and made both of his free throws, but he fouled out on an unnecessary contest with under four to play and committed three turnovers.

Outside of those three guards, Butler’s offense struggled. Lukosius, Bo Hodges, Bryce Golden and Bryce Nze combined for just 18 points — shooting 6/23 from the floor and 2/10 from three. After a strong game against Georgetown, Nze scored just two points and had four turnovers and four fouls.

There is still a lot of room for improvement on the offensive end but scoring 66 points on a good Xavier defense is a start.

Butler held Xavier to just 3-17 from 3-point range, the third consecutive game the Bulldogs held their opponent to under 21% from deep. The Bulldogs were torched by Villanova on Jan. 16 when the Wildcats shot 12-19 from three, but since adding Bo Hodges and Chuck Harris into the starting lineup the team has seen significant improvement in that department.

Butler seems much more comfortable with switching and contesting shooters, playing suffocating perimeter defense in the last three games. In the matchup with Xavier at Hinkle, Nate Johnson and Adam Kunkel combined to shoot 5/9 from three. Last night, they missed all eight of their shots. The improvement is clear, and not allowing opposing shooters to get hot has helped keep Butler in games.

While the perimeter defense was there, the Bulldogs struggled defending the interior, as they have all season. Xavier scored 40 points in the paint and shot 59% on two-point attempts. Butler also sent Xavier to the free throw line for 20 attempts, but were bailed out with the Musketeers hitting just 13 of the shots.

Interior defense, particularly against skilled bigs, has been a pain point all season. The problem is, there is no easy fix. Nze and Golden will be outsized in nearly every game this season, and there is only so much that can be expected of them when that is the case. Butler outrebounded Xavier, which is a good sign, but guarding bigs in the post is an entirely different proposition. With bigs dominating Butler on so many different occasions — Michigan State, Purdue, UConn and Providence, to name a few — it seems the Bulldogs will have to find another way to win.

The Bulldogs will be back in Hinkle on Saturday, Feb. 5 for the first matchup of the season with the high-powered offense of St. John’s. Then, three of the next four games will be on the road against unranked opponents — Creighton, DePaul and St. John’s again — with a home game against No. 24 Marquette sandwiched between.