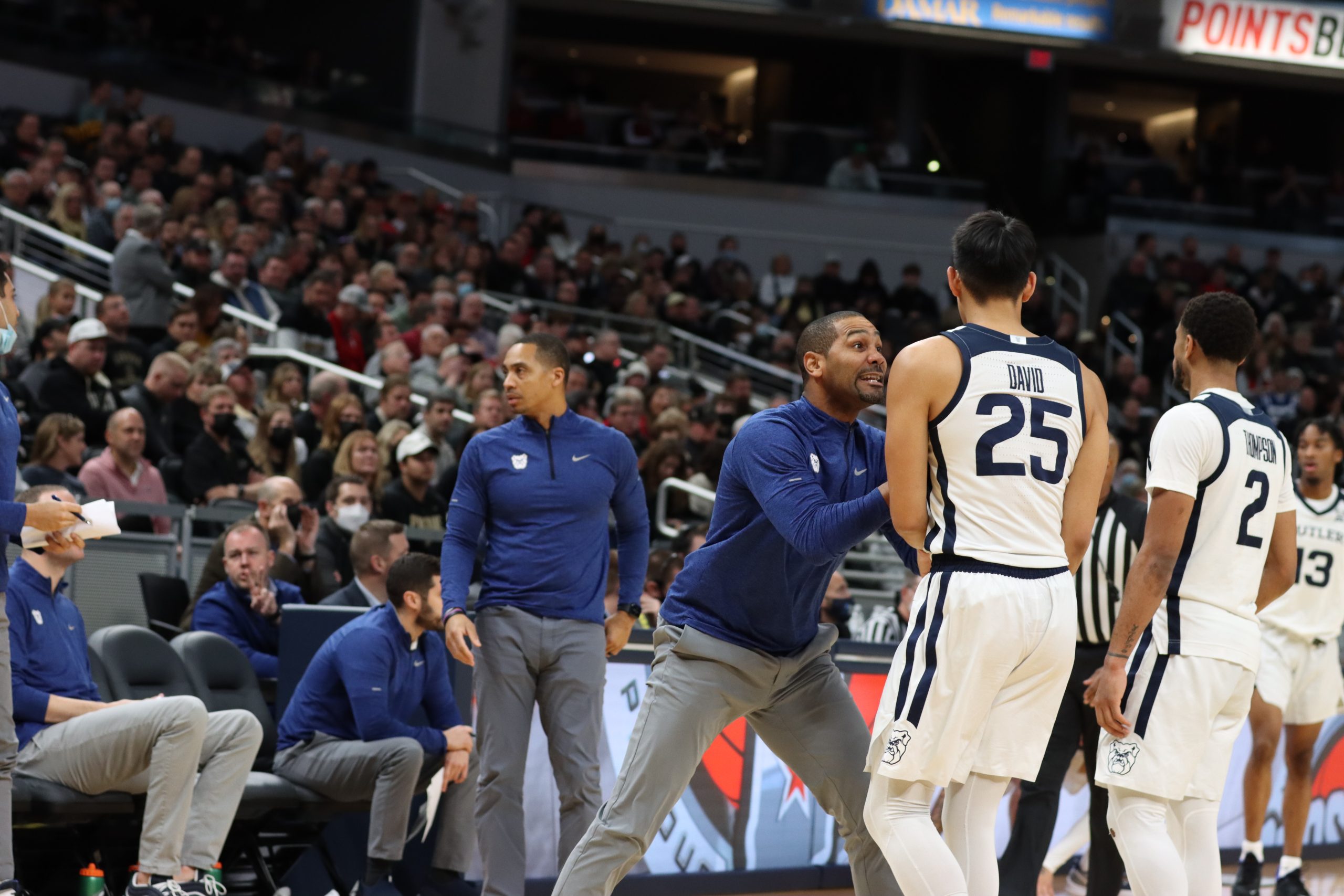 Butler head basketball coach LaVall Jordan yells at Christian David after a defensive mishap versus Purdue on Dec. 18. The Bulldogs allowed a season-high 77 points to the third ranked Boilermakers in the final edition of the Crossroads Classic. Photo by Francie Wilson.

This game was the final edition of the Crossroads Classic, an annual event that pits Indiana’s top four basketball programs against one another at the Pacers’ arena. Butler ends the event with a 6-5 record versus Purdue and Indiana, including three top-10 wins. IU finished with the best record at 8-3, while Notre Dame and Purdue both were 4-7.

After the game, Purdue head coach Matt Painter expressed his dismay with the event coming to an end.

“Without elaborating, I’m just befuddled how it’s going away. Like it’s a great event. It’s great for the fans, like what was bad about today?” Painter said. ” … People said it’s like losing its luster, well they’re not playing and coaching this game. Their opinion really doesn’t matter. But the people that play and coach in this game, this has been fabulous. Why it’s going away makes no sense to me.”

While the game started off fairly even for the two teams, Purdue pulled away at about the 11-minute mark in the first half and never looked back. Butler struggled offensively all game and were unable to hit shots whether they were open or not. It is hard to blame Butler for not winning this game against one of the best teams in the country but losing by 29 points is never a good sign.

Especially without Bryce Nze, Butler has struggled against opposing bigs all season long. They were dominated by Michigan State and Marcus Bingham Jr. on the interior, and Purdue did even more damage today. The Bulldogs had no answers for Edey, who stands at 7-feet-4-inches. Edey nearly outrebounded Butler by himself in the first half, and helped Purdue secure a massive 42-27 rebounding advantage over the entire game.

Head coach LaVall Jordan tried throwing different guys on Edey, like the athletic yet undersized D.J. Hughes, but nothing worked. Edey also clogged the lane, making it difficult for Aaron Thompson to get underneath the basket and pass out to shooters or take his own shot. While Purdue started their other premier big, Trevion Williams, he got into foul trouble early giving Edey more time to shine.

Unfortunately for Butler, Edey isn’t the last big they will play when the Big East comes around. After the game, Golden said the team needs to go over film and see what they can do to improve against these types of players.

“There’s talented bigs in the Big East, so we’ll take the film, adjust, see what worked, see what didn’t against size, get ready for the season coming up,” Golden said. “Like I said, no time to feel sorry for ourselves, we’ve got the first game of the conference schedule coming up in a week.”

There is no sugar-coating it — Butler shot the ball horribly. The team shot an abysmal four of 28 from beyond the arc, including 0-9 in the second half and Jair Bolden shooting 1-8. It hurt the team a lot that Chuck Harris was a late scratch with a non-COVID illness, but there isn’t a great excuse for shooting so poorly.

It was clear from the start that Butler’s strategy was to chuck up 3-pointers in hopes of keeping up with Purdue’s high-scoring offense, and the strategy may have worked better if they had even an average day shooting. Ultimately, it’s difficult to beat any team, let alone one of the best three in the country, when shots aren’t falling.

Butler also shot horribly from the free throw line. The team combined for just six of 14 free throws, far and away the worst performance from the charity stripe this season — only the Oklahoma game comes close.

These shooting woes could possibly be attributed to the road-like atmosphere at Gainbridge Fieldhouse, that seemed to be about 40% full of Purdue fans — with 40-50% Indiana fans and 10-15% Butler fans. This would not be a good sign for the Bulldogs, because true road Big East games will be much more of a hostile environment than this one.

In the grand scheme of things, this game doesn’t really matter all that much. It could have been a statement win, but a non-conference loss to No. 3 is expected. Now, the real season begins.

Butler opens the Big East schedule on the road Thursday, Dec. 18 versus St. John’s. St. John’s is 9-3 but have yet to win a game against any team from a top seven conference — the Red Storm have lost to Kansas, Indiana and Pittsburgh. Technically they have a win over Seton Hall and are 1-0 in the Big East, but Seton Hall was forced to forfeit due to a COVID-19 outbreak.

The real season is finally here for the Bulldogs, and after an up-and-down non-conference slate, it’s time to see what this team is truly made of.