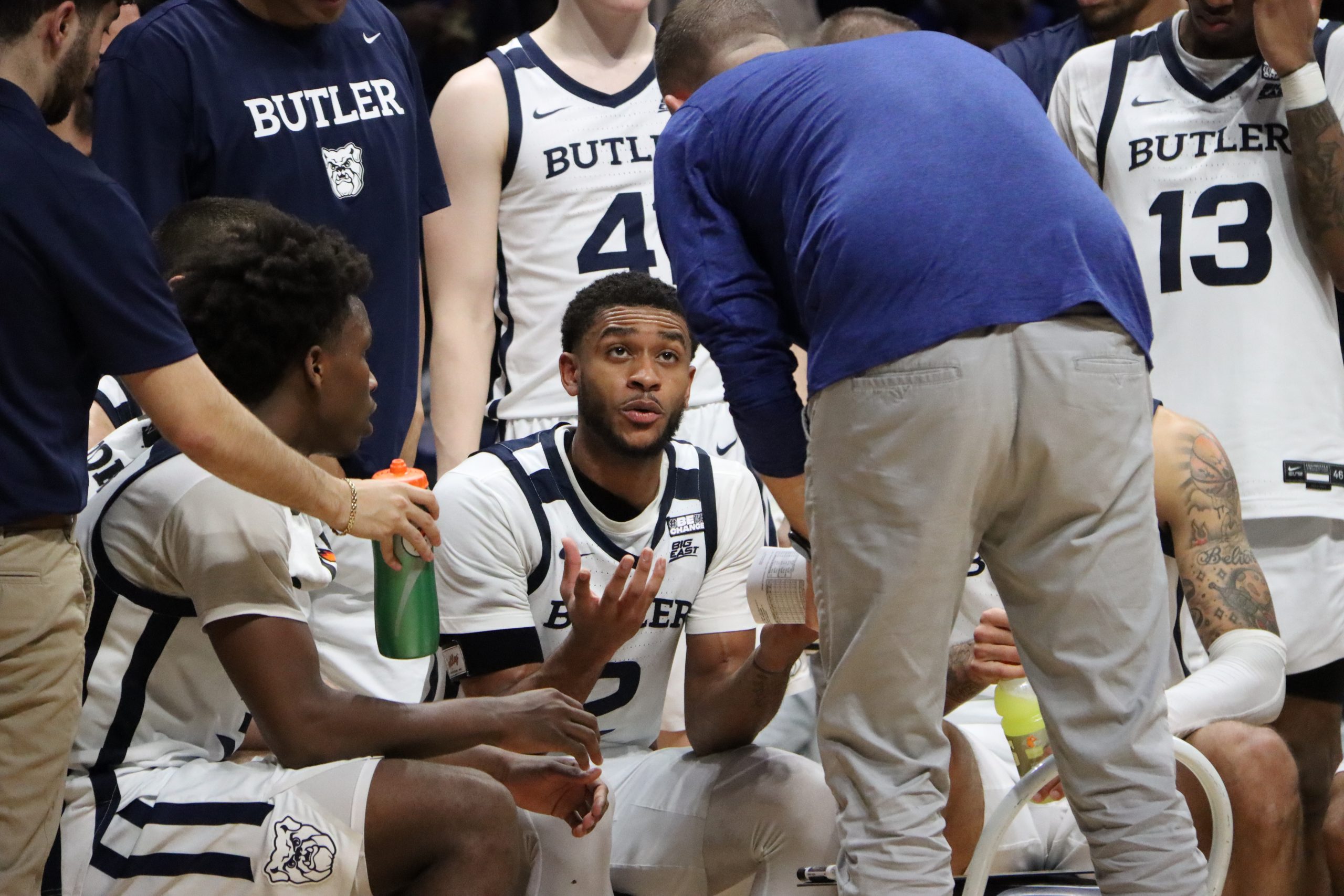 Graduate student Aaron Thompson talks with coaches during a timeout versus Michigan State on Nov. 17. Thompson made his season debut after serving a three-game suspension, in Butler’s 73-52 loss. Photo by Francie Wilson.

The Butler men’s basketball team lost their first game of the season to Michigan State by a score of 73-52 in front of a sold-out crowd. Ty Groce led the way for the Bulldogs, scoring 15 points and grabbing eight boards. The Spartans were led by Gabe Brown and Max Christie, who scored 19 and 18, respectively, and 7-footer Marcus Bingham Jr. who dominated the interior with six blocks.

Prior to the game, Xan Korman — a Butler student and former photo editor of The Collegian who tragically passed away in August — was given a tribute and a moment of silence with his parents in attendance.

Thank you to Xan Korman's parents for being at Hinkle tonight. We were honored to celebrate his life and impact. He continues to be missed. pic.twitter.com/o8eXtIgLDF

Korman had a close relationship with the basketball team and was going to be a basketball manager this season. During the announcement of Butler’s starting five, the crowd turned on the flashlights on their phones in the dark arena to honor Korman and his life.

This matchup was part of the annual Gavitt Tipoff Games, a series of matchups between Big East and Big Ten schools. Butler’s loss is the first for the Big East this year, as the conference had won the previous four matchups in the past two days, including Seton Hall defeating No. 4 Michigan on Tuesday.

This was the first time Butler and Michigan State played since the Final Four in 2010, with the Bulldogs defeating the Spartans 52-50 to improbably advance to the National Championship Game. This was also the first time legendary Spartans head coach, Tom Izzo, made a trip to Hinkle Fieldhouse. After the game, he had nothing but praise for the historic arena and the people in it, yet doesn’t forget the Final Four loss.

“This was a thrill for me,” Izzo said. “This was a bucket list thing and it met every expectation. You know you drive through the stadium and all the sudden Hinkle arena pops up — it reminds me of Lambeau Field back in my days. You know, right in the middle of the arena and the neighborhood. The crowd was awesome… Of course I have a couple bad memories of a Final Four, good memories for Butler [though]. But other than Gene Hackman not showing up — I can’t believe you people from here wouldn’t have done that for me — it was a hell of a day.”

Let’s go beyond the box score for Butler’s first loss of the season.

While Butler’s defense had decent stretches, the offense was poor for much of the game. The team shot just 29% from the field and 30% from three, and Butler’s best scorer Chuck Harris was just four of 16 from the field.

Nearly every Bulldog had a poor offensive night, but part of this can be attributed to the Spartans excellent defense. Their length, physicality and speed were palpable, and Butler struggled to get anything going inside the paint, scoring just 10 points underneath the basket. The Spartans center, Bingham Jr., not only blocked six shots, but cut off passing lanes and forced a few turnovers by denying entry passes underneath. Butler head coach LaVall Jordan noted the interior struggles, but said the team needs to learn how to play against 7-footers like Bingham.

“It’s not something that’s foreign to us, obviously we hadn’t seen it yet this season,” Jordan said. “Just being able to be disciplined when you get to the paint, have discipline guarding the post on the other end, and then on your block-outs. Those guys present different challenges to what we’ve seen, and it’s not gonna be the last one we see, so we’ll have to get better about having a plan for it.”

Whenever Butler started to get momentum offensively, it was quickly squashed by either a quick Michigan State basket or a silly Bulldog offensive foul. Shooting 60% at the free throw line didn’t help Butler in the momentum department either.

These offensive struggles were foreshadowed in the first three games, with bad first halves against IUPUI and Troy, but both times the team came out of the break, locked in on defense, and made big shots. While Butler played decent defense in the first part of the second half, they just couldn’t get their shots to fall.

It’s no secret that Butler boasts a fairly small lineup, with three starting guards and two undersized forwards, Butler will face many teams this season against lineups bigger than them. The weakness of this lineup was exposed tonight by Michigan State. Bryce Golden was run off the floor in the first half, as he could not keep up with the Spartans’ bigs, but did return in the second half out of necessity.

After Bryce Nze left the game in the first half with a shoulder injury — which head coach LaVall Jordan said he will get an MRI on tomorrow — John-Michael Mulloy saw decent minutes with Golden struggling. Mulloy played 11 minutes and had the highest plus-minus on the team, but quickly got into foul trouble with Michigan State targeting him down low. Myles Wilmoth also saw 16 minutes of action and was able to somewhat keep up with the Spartans.

The only Bulldog big that played well was Groce. He led the Bulldogs in points and rebounds, and more than doubled the next highest rebounder on the team. Groce, a transfer from Eastern Michigan, has played the Spartans every year of his collegiate career, so it’s not surprising that he was able to be a difference maker against Izzo’s team. He has proven to be Butler’s most athletic and versatile big, and with Nze’s health in question, it seems like he could be starting sooner rather than later.

After being suspended for the first three games of the season, starting point guard Aaron Thompson made his regular season debut in his final collegiate season. Thompson played more or less like his typical self, running the offense, driving to the rim and passing out to shooters or inside for layups. However, Michigan State was ready for this strategy, and coupled with some rust from missed time, Thompson turned the ball over four times. Thompson also drew an impressive eight fouls, but shot just one of six from the free throw line. It’s probably just rust from not playing, but that is not a great sign.

Thompson was good on defense, however. He forced two steals and had a block, and played good on-ball defense. The problem was, Thompson got into foul trouble midway through the second half, picking up two in the span of a minute, and was forced to sit out in a crucial stretch in the game. He ended with a -5 plus-minus, the third best on the team, which is a testament to his impact beyond the stat sheet.

Next up for the Bulldogs is a trip to Sin City for the Maui Jim Maui Invitational, which is taking place in Las Vegas this year. Butler will take on No. 15 Houston on Nov. 22, and play either Texas A&M or Wisconsin the following day, depending on the result versus the Cougars. They will also play a game on Nov. 24, versus either Oregon, Chaminade, Notre Dame or St. Mary’s.