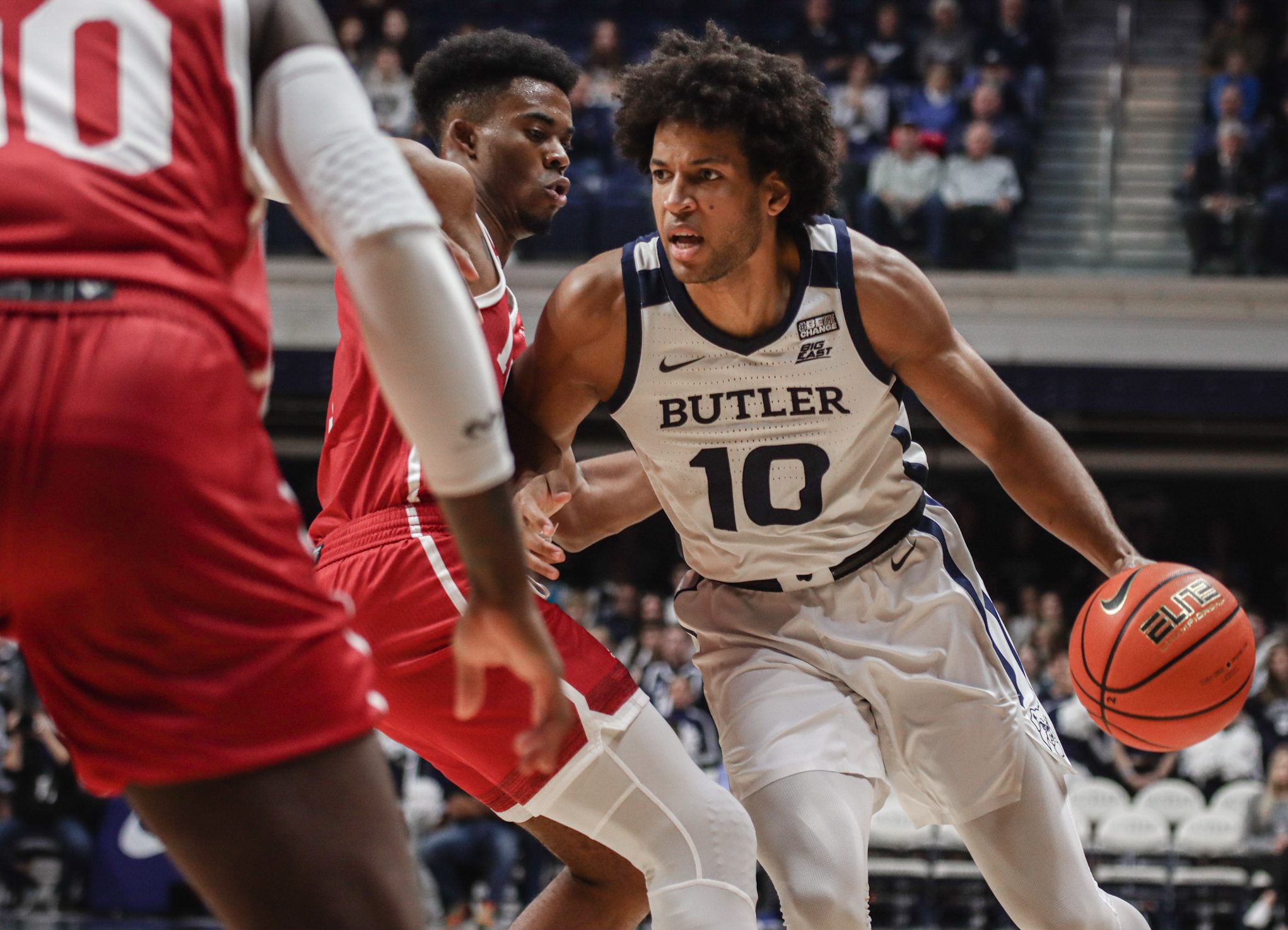 Bryce Nze drives to the basket in Butler’s season opener versus IUPUI on Nov. 9. Nze finished the game with nine points and seven rebounds in the Bulldogs 56-47 win over the Jaguars. Photo by Grace Denckhoff.

The team announced hours before the game that graduate student and starting point guard Aaron Thompson would be suspended for the first three games of the regular season for a “violation of team rules.” After the game, head coach LaVall Jordan addressed the suspension, but did not specify exactly what it was for.

“There’s a standard here,” Jordan said. “Those are things from a while ago that we gotta address because there’s a standard we have to uphold, and there’s disciplinary actions that have to be taken when we don’t live up to it. So, that’s not something from recently, guys have known they made their mistakes and we move on. It’s a next man up mindset, so I’m glad we have others who can step up and do the task.”

Thompson’s absence made way for freshmen Simas Lukosius and Taylor to start in their first collegiate action. Joining them in the starting five were the familiar faces of Bryce Nze, Bryce Golden and last season’s leading scorer Harris.

With the first game in the books, let’s go beyond the box score for the Bulldogs regular season opener.

Only seven Bulldogs received significant minutes, with Christian David coming in for just six minutes. It should be no surprise that Harris led the team in minutes and points given his importance to the team, and although he may not play that much the whole season, he is clearly the guy the Dawgs cannot go without. Harris’ main form of offense against IUPUI was driving hard to the basket and picking up fouls, and he converted 10 of his 13 attempts from the free throw line, by far the most attempts he’s had in a single game. After the game, Harris talked about his strategy going into games.

Taylor played 35 minutes, which is evidence to how much Jordan trusts the freshman already. Taylor didn’t have his best shooting night, but he shot the ball with confidence and drove to the basket aggressively, so don’t be surprised when he puts up 20 points in a game sooner rather than later.

Nze played 34 minutes and has proven to be Jordan’s first-choice big man. Nze had a poor shooting night, but his physical presence is always appreciated on both sides of the ball. During one possession in the first half, Nze grabbed three straight offensive rebounds, but his teammates were unable to convert a shot. Golden played 24 minutes and took just two shots, an uncharacteristically quiet day for the starter. Part of this was Jordan gave Myles Wilmoth 18 minutes of playing time, with the hope of getting a spark off the bench.

“It was just an energy thing,” Jordan said. “… We had a couple plays there where I felt like we didn’t have the energy I thought we needed, and [Wilmoth] is willing to go in there and do that. The other night he didn’t, tonight he got in there and gave us a great boost. A lot of times, energy trumps strategy. And so, we just needed some positivity and somebody to give us some momentum and a boost.”

Jair Bolden — who started almost every game last year — was relegated to the bench and only played 16 minutes, the fourth most of Butler backcourt players. He hit two 3-pointers, and will continue to play because of his ability to get open and shoot from deep, but it seems that the veteran has been surpassed by the new faces in the rotation.

With Thompson’s absence, Lukosius not only started but logged the fourth most minutes on the team with 29. The Lithuianian filled the stat sheet with eight points, two 3-pointers, seven boards and two assists. He had a couple rough moments, along with five turnovers, but had a few flashes that showed his extremely high potential. How quickly he has made an impact on the team is somewhat surprising, but at least until the likes of Thompson, Bo Hodges, Myles Tate and Ty Groce return, Lukosius will continue to play big minutes for the Bulldogs.

A win is a win, but the Bulldogs did not play particularly well against their subpar opponents.  A nine-point victory over a team like IUPUI is not the best way to start the season, but Jordan said the team needs to be able to win games in different ways.

“[We embraced] winning gritty,” Jordan said. “I think that’s a good lesson that this group learned coming out of two exhibitions where they were different. You’ve got to be able to embrace winning in different ways. And I think this group on the whole is a group that can do that.”

The Bulldogs defense was solid, holding the Jaguars to 47 points on 38% shooting. IUPUI missed 19 of their first 20 shots from 3-point range, and while part of that was much-improved perimeter defense from the Bulldogs, the Jaguars also had an ice-cold shooting night.

Butler similarly shot poorly from three and from the field, but made up for it at the free throw line  — a part of the court that haunted the Dawgs last season. After shooting just 64.6% from the charity stripe all of last season, the Bulldogs got to the line consistently versus IUPUI and converted 19 of their 23 attempts. A promising sign was Nze shooting four of four from the free throw line after shooting 47% last season. It’s something he worked on in his game, and this will help the Dawgs going forward if it continues.

The offense looked a bit stale at points, and the statistics are hard to look at. The team shot just 34% from the field and turned the ball over 14 times, and despite having 10 offensive rebounds, they only converted those into three second-chance points. These struggles can be attributed to new season jitters, an active and fast IUPUI team or just simple mistakes that can be easily fixed. A performance like this will get the win over IUPUI, and likely Central Arkansas and Troy too, but the Bulldogs will need to play a much more complete game to compete with the likes of Michigan State, Purdue and the upper echelon of the Big East.

The team clearly missed the steady presence of Aaron Thompson initiating the offense. When Thompson is on the floor, he limits mistakes and turnovers, finds the open man and generates good looks. It seems unlikely that the team would turn the ball over 14 times and score just 16 points in the paint with a smart playmaker like him on the floor, but this is the hand this team was dealt.

However, the suspension could have a silver lining. It has and will force players like Harris, Lukosius and Taylor to become more comfortable leading the offense, because they will need to in future seasons and later this season when Thompson is not on the court. The Bulldogs cannot rely solely on Thompson to generate good shots and play pest-like defense on the other end, they need to have other players step up. Although it was sloppy at times and was by no means perfect, the young guards stepped up to play and fill that role, which is as promising of a sign as any.

Butler’s next game is this Friday, Nov. 12 at home versus Central Arkansas at 6:30 p.m. The Bulldogs will play again at Hinkle the following night against Troy at 8 p.m.