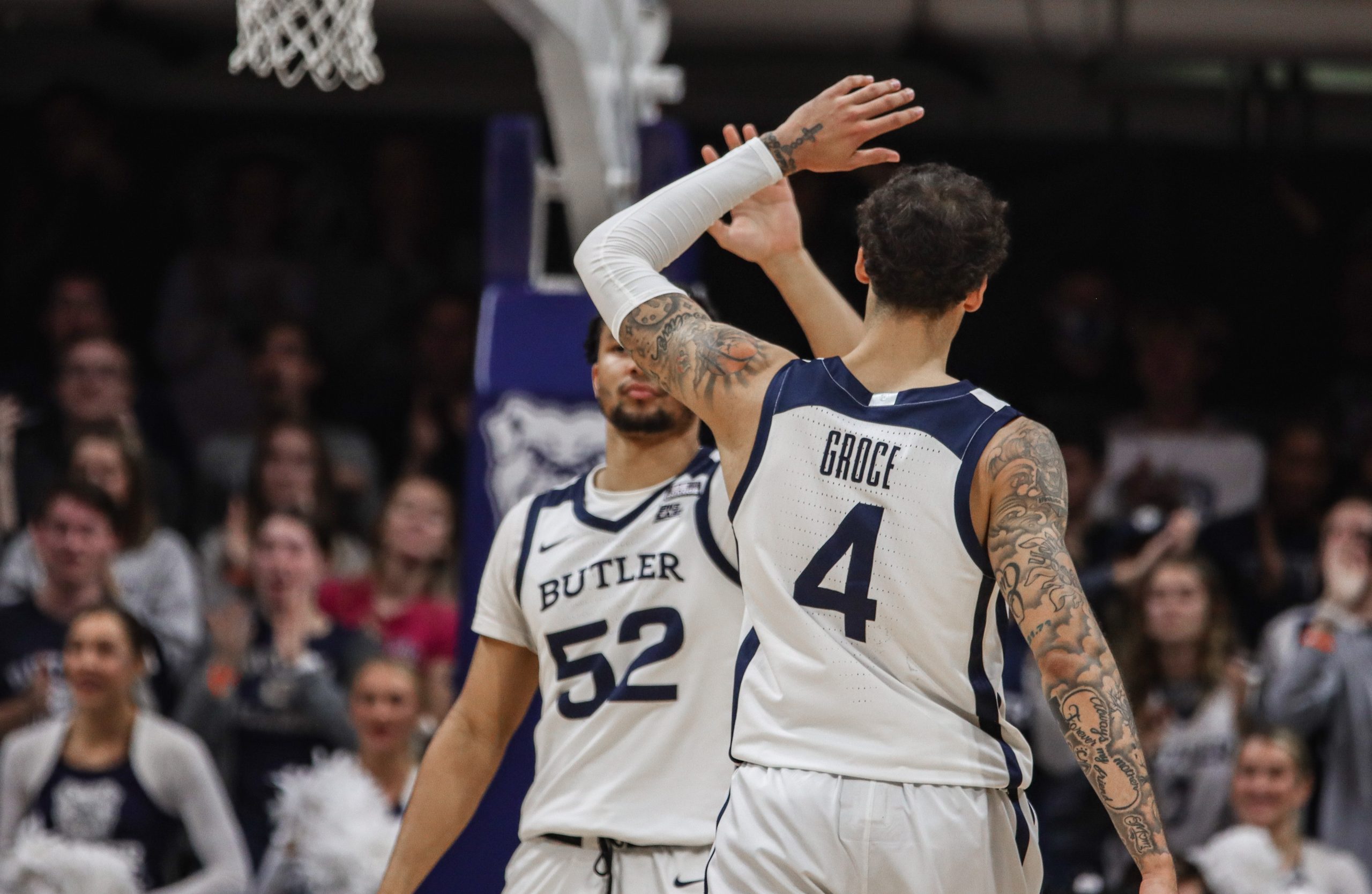 The Butler men’s basketball team earned their second win of the season in an 85-53 rout of the Central Arkansas Bears. The Bulldogs completely turned around their offense tonight, shooting 57% from the field and 45% from the 3-point line.

Freshman Jayden Taylor led all scorers with 18 points. Graduate student Jair Bolden was right behind him with 16 points, hitting four of his seven attempts from behind the arc. Forwards Bryce Golden and Bryce Nze had 12 and 11 points, respectively.

In his debut for Butler, graduate student Ty Groce contributed eight points, six rebounds, two assists and a block in the 18 minutes he was on the court.

Let’s go beyond the box score to see what the biggest takeaways are from the Bulldogs’ blowout win.

The “Ty Groce effect” is real

Though his numbers may not have told the whole story, Ty Groce made a huge impact on Butler’s win against Central Arkansas. Whether it was forcing a bad shot by the opponent, pulling down a rebound to spark a fast break or drawing a foul to cut the momentum of the Bears, Groce seemed to do it all.

Groce’s versatility allowed him to fill in at multiple positions throughout the game, something that head coach LaVall Jordan loves to have at his disposal.

“He’s played probably at every spot besides point guard throughout the course of his career,” Jordan said. “And he’s defended all five positions, so it’s great to have that.”

Adding Groce to the lineup will also deepen Butler’s rotation. Eight players logged over 15 minutes of playing time. That is pretty impressive, considering three players from last season’s main rotation — Bo Hodges, Myles Tate and Aaron Thompson — were not on the court tonight. It will be something to watch for these three all return, but Jordan could be looking at a potential 10-man rotation.

Freshmen continue to impress and improve

Freshmen guards Simas Lukosius and Jayden Taylor have played big minutes in the first two games of the season. Taylor averages the most minutes played on the team, while Lukosius comes in third.

In their first two regular season games, both the freshmen have shown flashes of brilliance. Predictably, they have also made some rookie mistakes. While Lukosius has made passes that you would expect from a senior rather than a freshman, his assist-to-turnover ratio is 4-to-10. Jordan acknowledged Lukosius’ skills as a passer, while also critiquing what he can be doing better.

“The thing with really good passers is that they’re high risk-takers,” Jordan said. “So the one great pass versus a couple of simple plays is what [Simas] is learning.”

Similarly, while Taylor leads the team in points-per-game with 15, he still has room to improve on his focus and communication on defense.

Regardless of their flaws, Taylor and Lukosius will definitely continue to be vital parts of the Bulldogs’ lineup as the season progresses.

What to expect going forward

With two games under their belt, the real test begins now. It starts with the first back-to-back of the season, as the Bulldogs take on the Troy Trojans tomorrow night. Then, on Wednesday, Nov. 17 will face a true blue-blood in Michigan State in front of a sold-out crowd at Hinkle.

The following week, the Dawgs travel to Vegas to take on the Houston Cougars, who made it to the Final Four last season, on Nov. 22. The next day, they will either face Texas A&M or Wisconsin.

This four-game stretch will be a great judge of where Butler is as a team and how far, or close, they are to being a real contender in the Big East. While the answer to that question is unknown as of right now, a win like this one tonight builds confidence and teaches the team how to handle success.