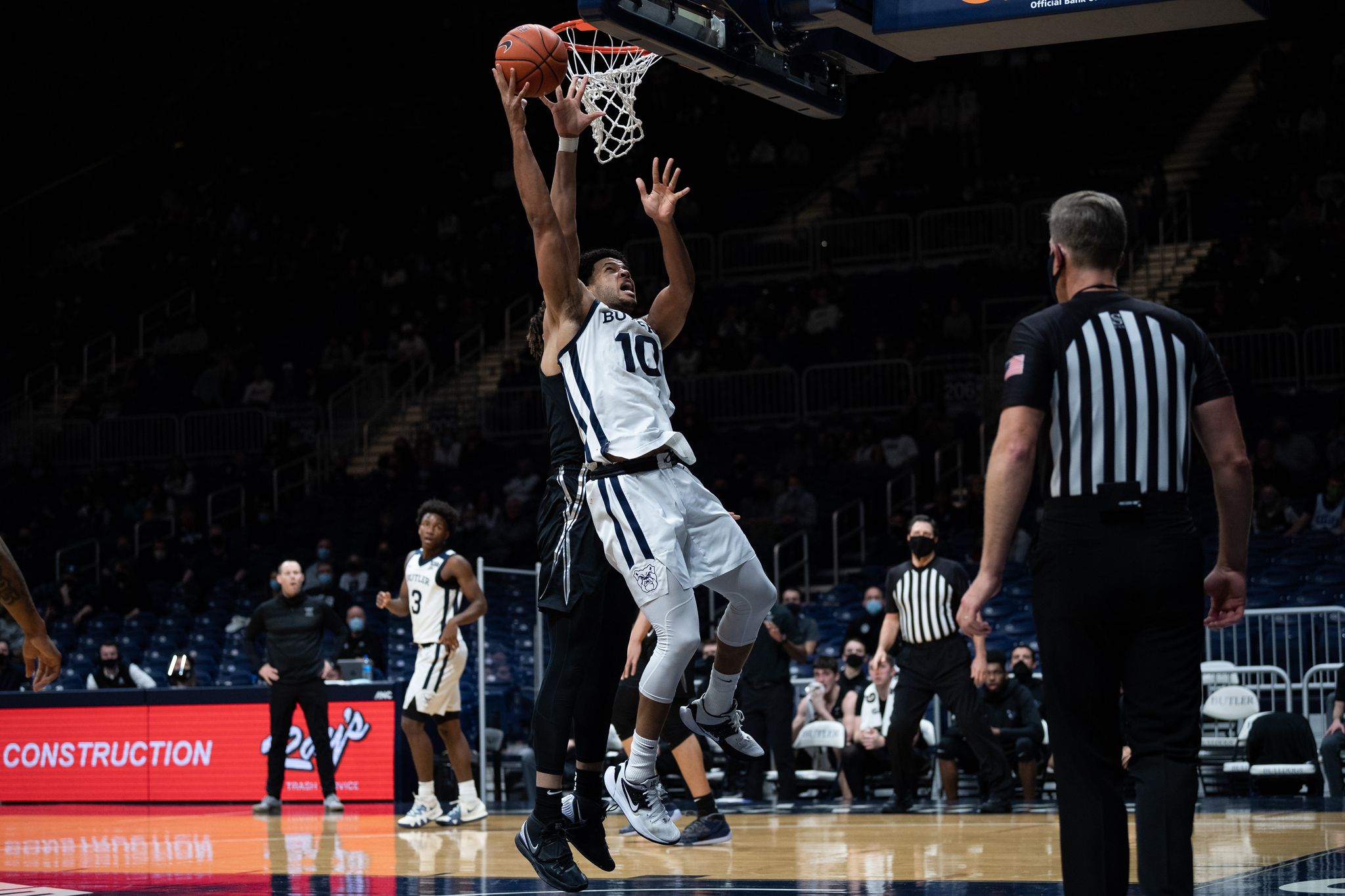 Bryce Nze goes up for a layup in Butler’s loss to Xavier at Hinkle on Jan. 30. The Bulldogs got their revenge on the Musketeers defeating them in overtime, 70-69; Nze scored 19 points in the victory. Photo by Zach Bolinger.

The Butler men’s basketball won their second Big East Tournament game in program history tonight, defeating Xavier at Madison Square Garden in overtime, 70-69. The Bulldogs were down by as much as 19 points in the first half and were trailing by 14 points at halftime.

Three Butler players finished with 19 or more points; Chuck Harris led the way with a game-high 21 points including the game-winning free throws with three seconds remaining in overtime. The freshman guard made none of his eight field goal attempts in the first half, but made seven of nine in the second half.

Zach Freemantle and Dwon Odom led the Musketeers with 14 points apiece. Xavier shot 58% from the field in the first half, but scored just 19 points in the final 20 minutes of regulation.

Harris didn’t win this game alone, though. Bryce Nze and Bryce Golden combined for 39 points off 16-for-21 shooting from the field. Nze knocked down all four of his 3-point attempts for a new career high. The trio scored all but 10 points on the night for Butler.

Let’s go beyond the box score of a game that gives the Bulldogs a ton of momentum into the rest of this week and next season, while knocking Xavier out of the NCAA Tournament conversation.

1. This is Chuck Harris’ team now

If there was any doubt who was the go-to guy for Butler before the team arrived in New York, those questions are most definitely answered now. Despite laying a goose egg in the first half, Harris seemed completely unrattled in the second half and kept shooting with the confidence of a seasoned event. When the lights got the brightest — and they get pretty bright at the World’s Most Famous Arena — Butler looked to Harris and he delivered time and time again.

First of the two biggest moments for Harris in this game was the 3-pointer at the top of the key when the Bulldogs were down 67-65 with 42 seconds remaining in overtime. Fresh off a Xavier 6-0 run that could have depleted the air out of a young Butler team in their first trip together to the Big East Tournament, Harris stepped into the three with confidence and drained it. The next moment was the most important, though. On a drive to the rim in the final seconds, the Musketeers questionably fouled Harris as if they thought they had fouls to give. Entering a one-and-one bonus where missing the first free throw ultimately ends the game, the Bulldogs’ freshman star swished both. In college basketball, it’s a general theme that your seniors make the biggest plays as freshmen are still acclimating to the college game. This is not the case for Butler — Chuck Harris has arrived.

It would be unfair to say, however, that Harris is completely responsible for Butler’s win. Golden and Nze collectively brought their A-games and kept the ship afloat while Harris struggled to find his rhythm in the first half. Golden’s two putbacks were especially huge down the stretch.

On the defensive end, multiple players played their part. In the postgame press conference, head coach LaVall Jordan noted Myles Wilmoth and Jair Bolden’s efforts on the defensive effort despite scoring a combined four points as a duo. Forcing any team in the Big East to just 19 second-half points is challenging in itself, but to stop the offensive momentum the Musketeers had in the opening 20 minutes is something to behold.

This game wasn’t all sunshines and rainbows for the Bulldogs, though…

The first ten minutes of play for Butler was about as bad as it’s been all season for Coach Jordan’s group. With under six minutes to play in the first half, the Bulldogs trailed 32-13. You read that right. The Musketeers were on the verge of tripling Butler’s score in the first half. Xavier knocked down six of their 12 3-point attempts in the first half and coasted into the locker room with a 14-point advantage.

At one point in the first half, everyone not named Bryce on the Bulldogs was a combined 1-for-19 from the field. That, paired with the spotty perimeter defense against the Musketeers, pointed to an early exit from the Big Apple for Butler.

In the postgame presser, Harris said the team did some deep regrouping in the halftime locker room.

“Is this the way we want to go out?” Harris asked.

The resounding answer was no.

Despite having double-digit deficits in the first half in over half of their games this year, Butler’s young group fought back nine times out of ten.

In just about every Beyond the Box Score this season, I have made a similar statement. The Bulldogs had every right to look at the scoreboard in the halftime locker room and use a variety of reasons why they should pack up their bags and head for the exits. Xavier, according to most knowledgeable in the area, was on the right side of the NCAA Tournament cut line coming into tonight’s game. In all likelihood, all the Musketeers needed to do was beat Butler and put up a fight against Creighton and they’d hear their name called on Selection Sunday.

But that’s not the Butler Way. Led by a talented freshman and a supporting cast of college basketball veterans, the Bulldogs are sending Xavier home.

The beauty — and the beast — of conference tournament season in college basketball is that every team has to bring their best the next day. No matter how hard-fought or emotional the game before was, the teams must set that aside and refocus for their next opponent.

Butler will look to do that against a familiar opponent in No. 17 Creighton. In the regular season finale, the Bluejays stomped the Bulldogs to the tune of a 93-73 win in Omaha. While Greg McDermott did not coach in the regular season matchup, he will take the sideline in New York. What are the pros and cons of playing Creighton so closely after a beatdown? Pro: Coach Jordan — who thrives in making in-game adjustments — will have a chance to do just that on Thursday night. The con? The Bluejays are still a nationally ranked team who is playing a Butler team less than 24 hours off an emotional, overtime victory over its rival.

However, this is March and anything goes once it’s tournament time. Butler-Creighton will be the third game of a Thursday quadruple-header in the Big East quarterfinals at 6 p.m. The Bulldogs look to make their second-ever trip to the Big East semifinals with a win.

While Xavier gets all of the bubble talk, I hear you on the other side of the screen. Is there any chance Butler sneaks into that conversation with a trip to the Big East Championship? The short answer is no. The Bulldogs will have to run the table at Madison Square Garden to hear their name called on Selection Sunday. While the odds are long that you will see Butler’s name on your printed bracket come Monday morning, this week will be instrumental to the momentum this program builds toward the future. And that future is as bright now as it has ever been.