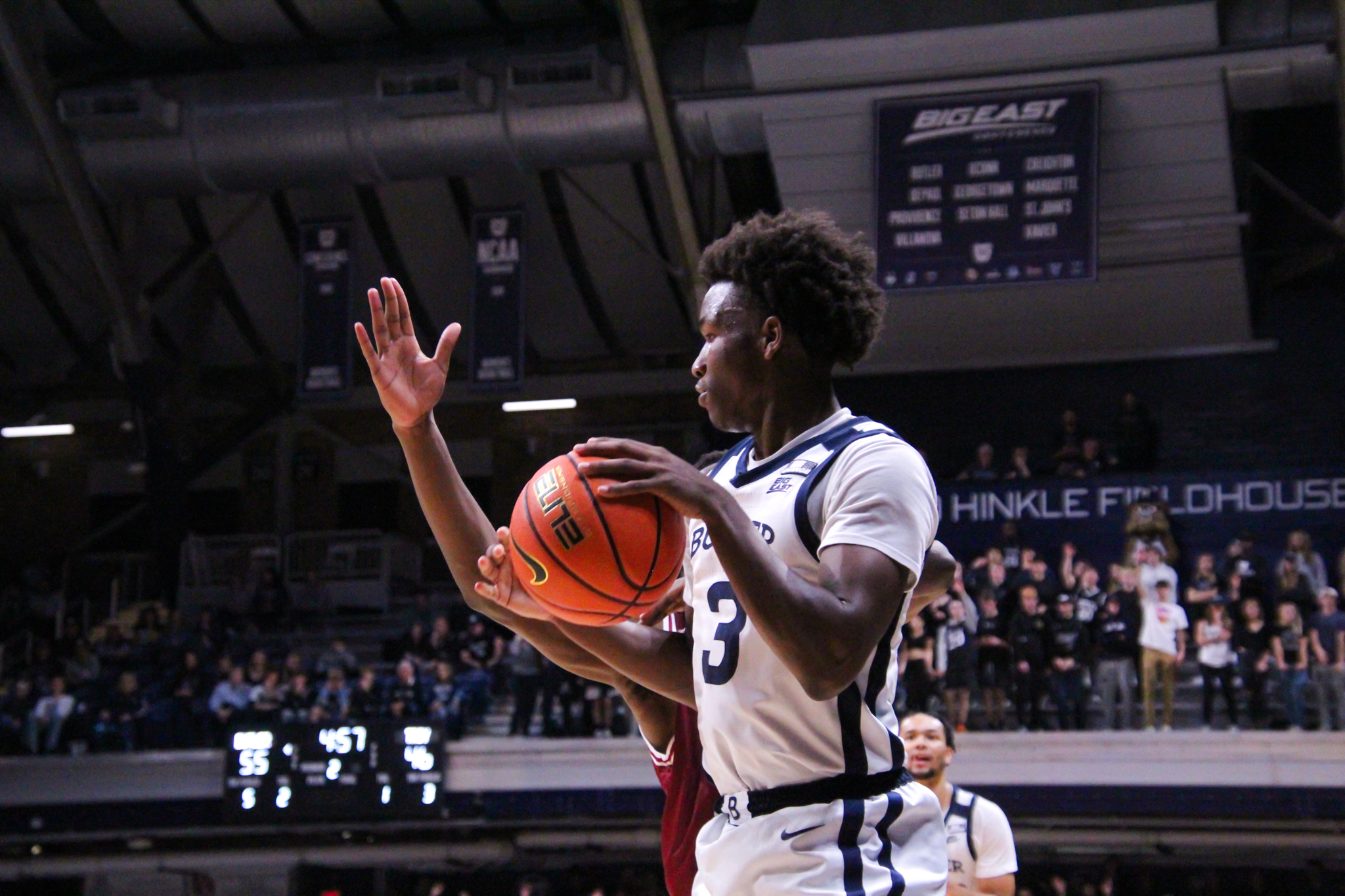 The Butler men’s basketball team defeated the Oklahoma Sooners 66-62 in overtime in their first true road game of the season. Finally looking like himself again, Chuck Harris led the Bulldogs in scoring with 26 points. Bryce Golden scored 10 points and grabbed seven boards. Aaron Thompson ended with seven points and three assists. With his three dimes, Thompson has now moved into third all-time in assists for Butler. Simas Lukosius also played well off the bench — seven points, six rebounds and two assists — and hit four clutch three throws late in the second half and in overtime.

In what some called a must-win for the Dawgs, there was a little bit of everything in this game — a flat start, big-time shots, defensive collapse, clutch free throws, a near buzzer-beater and nearly everything in between. The most important thing, of course, is the W that is being added to Butler’s win column. Let’s go beyond the box score on a huge win for the Bulldogs.

Just when we were about ready to put out an APB for Chuck Harris, he finally answered the call. Harris scored a season-high 26 points, shooting 48% from the floor and 57% from three. Harris was moving off the ball and getting open shots from screens and shifty ball-handling all night — something he’s struggled to do all season.

If this game is any indication that Harris is back to being himself, then this is good news for Bulldog fans. In a game where leading scorers Jair Bolden and Jayden Taylor combined for only three points, Harris was able to be the go-to guy when the Bulldogs needed a bucket. He is at his best when he is able to score at all three levels, and he did just that tonight. Butler will need more of this version of Harris as they inch closer to conference play.

Defensive effort might have been the best of the season

While Chuck Harris’ offense was a big reason why the Bulldogs were able to upset the Sooners, their defense also ended up playing a major role too. Pretty much every key that the Dawgs had defensively — besides allowing the crazy shot by Elijah Harkless to force overtime — was executed well.

Oklahoma does three things pretty efficiently: feed Tanner Groves, shoot two-pointers, and get to the foul line. While Oklahoma was able to shoot 64% on two-point field goals, each of those 16 made shots did not come easy. Butler forced the Sooners to take deep shots, keeping the ball out of the paint and away from Groves. The Bulldogs have struggled with this all season, so head coach LaVall Jordan must be pleased with his team’s performance on the interior.

The Bulldogs also only sent the Sooners to the line just five times in the entire game. For a team that usually lives in the paint, this really hurt Oklahoma’s offense. It forced them to take shots they don’t usually take, resulting in their 31 attempts from three. This defensive stand is something that the Dawgs will need to build on going forward, especially with their game against No. 1 Purdue looming.

Through the first four games of the season, it looked like Hughes might consider red-shirting this season, as his chances to see real playing time were looking slim. However, once graduate student forward Bryce Nze went down against Michigan State, Hughes’ impact on the court has seemed to only increase with time.

He isn’t the most flashy or the quickest player, but his will to compete and help his teammate is starting to jump off the screen. With each game, he has gradually seen more minutes. Tuesday night was a prime example of what role he fills on this team.

Hughes played 23 minutes — with more than half of that time coming in the final ten minutes of regulation and nearly all of overtime. Jordan definitely saw something in the 6-foot, 6-inch freshman’s game, because keeping him in the game resulted in Hughes grabbing big rebound after big rebound. Six points and six rebounds don’t exactly jump out like 26 points do, but don’t be fooled. If you’re into analytics, Hughes and Christian David — who also played a nice game off the bench — tied for the highest plus/minus on the team with a plus 11. Until Butler can get a little healthier at the four spot, expect Hughes and David to continue to produce big minutes off the bench for the Dawgs.

Butler will play their next game at home against the Eastern Illinois Panthers on Saturday, Dec. 11 at 4 p.m.