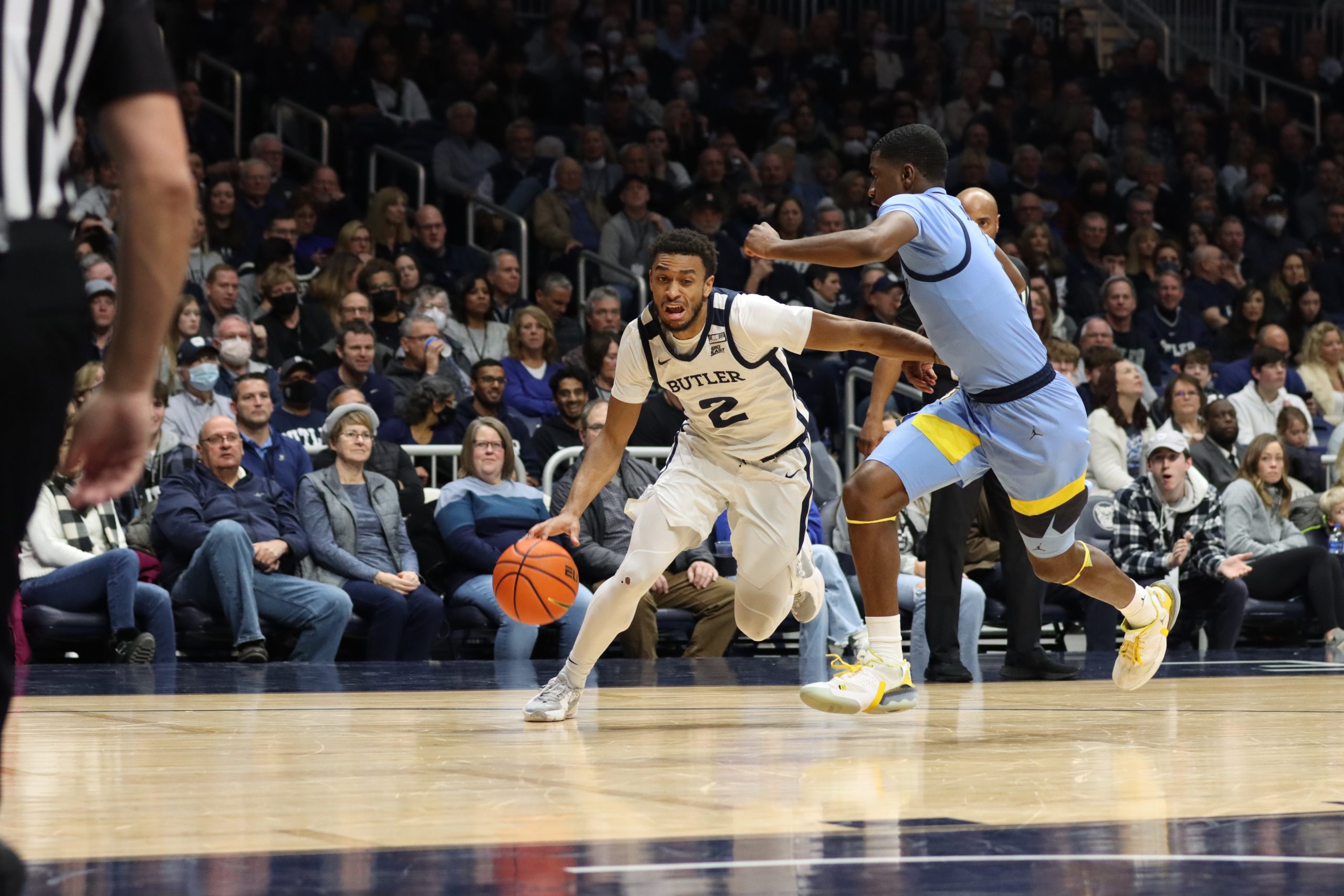 Aaron Thompson drives to the basket in Butler’s win over Marquette on Feb. 12. Thompson racked up nine points and five assists, and broke Thomas Jackson’s record for most assists in Butler history. Photo by Francie Wilson.

The Butler men’s basketball team completed the upset over No. 18 Marquette last night, winning 85-79 in Hinkle Fieldhouse. Butler scored the first basket of the night two minutes into the game and never trailed or tied with Marquette the rest of the game, pulling off a true wire-to-wire win.

Bryce Golden led the way with a career-high 22 points, Chuck Harris added 15 points and five assists and Bo Hodges secured a double-double with 11 points and 11 rebounds. This was Butler’s first top 25 win of the season in the tenth attempt, and the team moves to 12-13 overall and 5-9 in the Big East.

The Bulldogs started the game off scorching hot, hitting six of their first eight 3-point attempts, and held a 40-19 lead with just under six minutes to play in the first half. Butler dominated Marquette in every aspect of the game in the first half, and clearly frustrated the Golden Eagles with aggressive intensity combined with lights out shooting.

With two seconds left in the half and Butler up 42-27, Marquette’s Justin Lewis and a teammate went for the ball at the same time on the in-bounds pass, negating any chance for Marquette to attempt a buzzer-beating three. Frustrated, Lewis yelled at his teammate and threw his headband as he walked off the floor and into the locker room, encapsulating Marquette’s first half.

Frustrated, Justin Lewis throws his headband at the end of the first half. Photos by Francie Wilson.

While everything went right for Butler in the first half, the Golden Eagles came out of halftime hungry. The redshirt freshman duo of Lewis and Tyler Kolek came out swinging in the second half, combining for 32 of Marquette’s 52 points after halftime and shooting a combined six of nine from deep. A Kolek three helped the Golden Eagles cut the lead to four with just under five minutes left, but the Bulldogs put together their best clutch-time performance of the season.

On the very next possession, Chuck Harris hit a 3-pointer, Aaron Thompson’s fifth assist of the night — more on that in a moment. Then, Thompson scored a driving layup, and on the next possession, Harris hit another step-back 3-pointer to give Butler a nine-point lead with three minutes to play. A Bryce Golden corner three with 36 seconds left sealed the deal for Butler, securing the team’s best win of the season.

Let’s go beyond the box score on this record-breaking night.

Thompson, who has started in Butler’s backcourt since 2017, etched his name into Butler history last night. With his fifth assist, Thompson passed Thomas Jackson for the most assists recorded in the history of the Butler men’s basketball program. Jackson’s record of 540 assists stood for 20 years until Thompson surpassed it with 541 last night.

Thompson has started in nearly every game he has been healthy since his freshman year, sharing the backcourt with Kamar Baldwin for three seasons. Thompson led Butler in assists each of his first four seasons, and in all likelihood will do it for a fifth time once this season concludes.

After the game, Thompson reflected on this historic achievement.

“Coach played with the guy that held the record previously and he talked about how good he was,” Thompson said. “So just being able to follow up and try to live up to that legacy to show that I’m as good as any point guard that’s played here. Most importantly, with records like an assist record, you can’t do it without your teammates. It ain’t like a scoring record where you can say ‘I put the ball in the basket myself.’ I can’t do it without guys making shots so, I owe it to all my teammates — this is not just an award for me, but for every teammate I’ve played with from my freshman year to now —”

“Exactly,” Thompson said with a smile. “Yeah, so I mean, I owe it to them, this is just an award for them, they can say they won an award with me. They did it for me, I did it for them.”

Butler possesses a roster that was known for its depth and experience before the season began, so it is a bit surprising that at this point in the season with every player healthy, Jordan only brought two players off the bench. Jordan has slowly shrunk the number of players entering the game, but last night was the second time Jordan played just seven players this season.

Along with the typical starts of Golden, Hodges, Thompson, Harris and Bryce Nze, freshmen Simas Lukosius and Jayden Taylor were the two to come off the bench. Taylor didn’t have his best scoring output with just two points on 1-6 shooting but grabbed four rebounds and was the only Bulldog who didn’t commit a turnover.

Lukosius had an efficient night in his 19 minutes, scoring 14 points on just seven shots. He whipped out a nasty euro-step into a floater in the first half that Bulldog fans loved and hit back-to-back threes early in the second half to bring the lead to 18. Lukosius also iced the game at the free throw line at the end of the game.

Every starter played at least 30 minutes, and Thompson likely would have played much more if he didn’t pick up a second foul with seven minutes left in the first half that put him on the bench until after halftime. After the game, Jordan said only playing seven guys wasn’t necessarily the plan coming in but liked the quickness he saw on the defensive end, so decided to stick with just Taylor and Lukosius off the bench.

The offense that the shortened rotation produced was stellar — the ball movement helped Butler shoot just under 50% from both the field and from three. Butler hit a season-high 13 3-pointers and the 18 assists was just one off from a season best. Golden was the main beneficiary of this ball movement, pouring in a career-high 22 points and three 3-pointers. After the game, he gave the praise to his teammates.

“The ball was moving well tonight,” Golden said. “I think we had 18 assists which is probably one of our better games this season. The ball was moving, we were sharing the rock, and Coach always says, ‘The best man is the open man,’ and we did a good job on capitalizing.”

The only real pain point of the night was defense in the second half. The Bulldogs came out of halftime lacking the same intensity they had in the first half, and Marquette capitalized. The Golden Eagles scored 52 points after halftime, hitting seven threes and shooting 15-18 from the free throw line, forcing Butler to make big shots down the stretch. While the Bulldogs made the shots last night, if a few of them don’t fall, it’s a completely different story.

Butler will be on the road for the next two contests, first against second-to-last placed DePaul on Tuesday, Feb. 15, and then against St. John’s on Feb. 18 in a game that was rescheduled from December. Then, the Bulldogs will return to Hinkle to take on the 21-2 Providence Friars in the second-to-last home game of the season.

The Bulldogs have a chance to build momentum after a surprise upset last night. The team has been playing much better as of late and if they can continue that trend, have a chance to make some noise in the Big East Tournament when March rolls around.