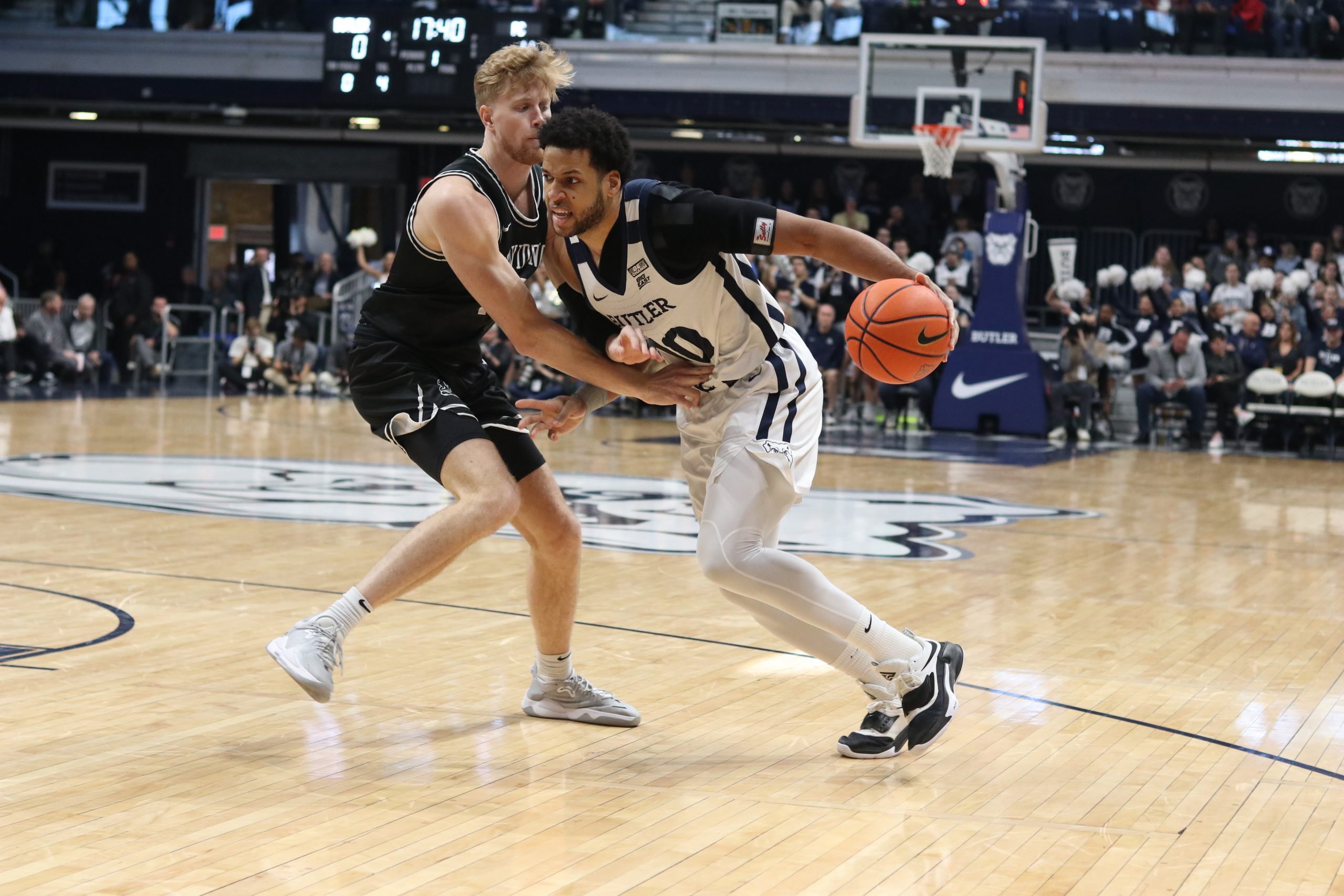 Bryce Nze uses his shoulder to drive to the hoop in Butler’s loss to Providence on Feb. 20. Nze will play his final game at Hinkle Fieldhouse against Villanova on March 5. Photo by Francie Wilson.

In the final regular season game of the season — and the last game at Hinkle Fieldhouse for seven Bulldogs — the men’s basketball team hosts AP No. 11 Villanova. Butler comes into this game on a four-game losing streak, having won only two of their last nine games. However, nearly every time Villanova comes into Hinkle, something special happens.

Last year on senior day, Butler defeated No. 8 Villanova in Hinkle 73-61, thanks to 20 points and four 3-pointers from Chuck Harris. In February 2020, Kamar Baldwin sank a step-back buzzer-beating three to give Butler a 79-76 win over the tenth-ranked Wildcats. On Dec. 30, 2017, the Bulldogs shocked the college basketball world with a 101-93 win over No. 1 — and eventual National Champion — Villanova as Baldwin, Kelan Martin and Paul Jorgensen combined for 66 points and 11 threes. A little less than a year earlier, 66 points was all Butler needed to beat No. 1 Villanova at home, 66-58.

In the past five seasons, the national powerhouse Villanova men’s basketball program is 1-4 against Butler at Hinkle. The lone loss for Butler came in 2019, when the No. 18 Wildcats won 80-72 as future NBA player Eric Paschall scored 23 points.

For some reason, Butler has Villanova’s number in Hinkle. No matter how good Villanova is or how down a season Butler is having, the Bulldogs always seem to find some Hinkle magic when Jay Wright’s Wildcats come to town.

This year, the Wildcats are the 12th ranked team according to Kenpom and possess the seventh ranked offense, which includes six players scoring over nine points a game. As was seen in Butler’s blowout loss to Villanova earlier this year, Villanova’s combination of elite offense, defense and rebounding is a nightmare to handle. With Butler’s poor form as of late and Villanova aspirations of a National Championship, it seems as good of a time as any for the Wildcats to break their curse in Hinkle.

Here’s what you need to know ahead of the regular season finale.

The seniors and super-seniors

For seven Bulldogs, this will be the final time they suit up in Hinkle Fieldhouse. Prior to the game, seven players will be recognized for senior day — Aaron Thompson, Bryce Nze, Bo Hodges, Jair Bolden, Christian David, Ty Groce and Mike Parker.

Thompson and David both joined the program back in 2017 and were able to play a fifth season after the NCAA granted an extra year of eligibility when COVID-19 cut the 2019-20 season short. Thompson has started nearly every game of his career and became the all-time program leader in assists earlier this year. David became a strong leader and role player early in his career, but a torn ACL in early 2020 forced him to sit out for a full calendar year and he has not seen nearly as much playing time since his return.

Nze joined the program in 2018 but had to sit out the 2018-19 season following his transfer from Milwaukee. It was worth the wait though, as Nze has become a consistent starter and the anchor of the team’s defense in his three seasons with the program. Nze led the Big East in field goal percentage in his first season at Butler and has led the team in rebounding the past three years.

Bolden joined the program prior to last season after transferring from South Carolina. Bolden has become Butler’s most prolific 3-point shooter in the past two seasons, especially last season. No Butler player played more minutes last season than Bolden, but with a plethora of young guards joining the program in the summer, Bolden’s minutes have been reduced significantly this year. But, he is still productive when he gets his time on the floor. Bolden will sit out today’s game as he nurses an ankle injury.

Like Bolden, Hodges also joined the program prior to last season. Hodges transferred from East Tennessee State but was held out at the beginning of last season because of NCAA eligibility concerns. He made his debut in late January and immediately showed the kind of player he is. The burst and athleticism that Hodges possesses are something that is rarely seen from a Butler player, and in his short time with the program he has become one of the team’s most important players. His Butler career has been cut short due to various injuries, but he has raised the ceiling of the team when he is on the court.

In his final year of eligibility, Ty Groce chose to come to Butler after four years at Eastern Michigan. Groce has been the go-to backup big man on this year’s squad, and replaced Nze in the starting five for seven games after Nze suffered an injury to his shoulder. Groce is a high-flying wing with a good 3-point shot, and produced a few highlights earlier this season, connecting on alley-oops with Aaron Thompson. When head coach LaVall Jordan shortened the lineup earlier this season, Groce was left out at times, but he has made the most out of the minutes given to him.

Finally, walk-on Mike Parker has been with the program since the 2019-20 season after transferring from Division III Salisbury. Parker hasn’t played much in his time at Butler, but always gets a roaring ovation when he checks into games at Hinkle. He is a perfect 6-6 from the free throw line in just 12 minutes of action this season, so don’t be surprised if he gets some playing time at the end of the game for a final send off.

These seven athletes have given a lot to the basketball program over the years, but their time in Hinkle Fieldhouse is coming to an end. This group has broken records, started foundations and fought through injuries, and now have one last game to say goodbye to their historic arena and the fans that have supported them through the years.

As things currently stand, Butler would be the nine-seed heading into the Big East tournament, and would play the eight-seed, Xavier, in the first round. If the Bulldogs were to win that game, they would play top-seeded Providence the following day.

Butler is currently tied for the nine-seed with DePaul but win the tiebreaker because of their two wins over the Blue Demons. Butler seemed locked into the nine-seed a week ago, but DePaul has racked up three straight wins, and combined with Butler’s four straight losses, the teams now go into the final regular season game without a seed locked in.

However, the seeding scenarios are simple. If Butler wins or DePaul loses to No. 18 UConn, Butler gets the nine-seed and DePaul the 10. If DePaul pulls off another upset and beats the Huskies and Butler loses at home, DePaul will finish ninth and Butler will finish 10th.

While the difference between the two seeds may not seem to be significant, for Butler it may be. As a nine-seed, Butler would play Xavier — a team Butler has knocked out in the last two Big East tournaments — and despite two losses to the Musketeers this year, Butler hung with them both times and Xavier has gone on a significant cold streak since.

As the 10-seed, Butler would play St. John’s, the de facto home team for the tournament and a squad who beat the Bulldogs by 34 points just weeks ago. If Butler won that game, the second-round opponent would be Villanova, who Butler performed much worse against this year than Providence.

No matter who Butler’s first round opponent is, it will be an incredibly difficult task to run through the Big East tournament to secure a bid to March Madness. But as we saw with eight-seeded Georgetown winning the conference tournament last year, truly anything can happen in college basketball when March comes around.