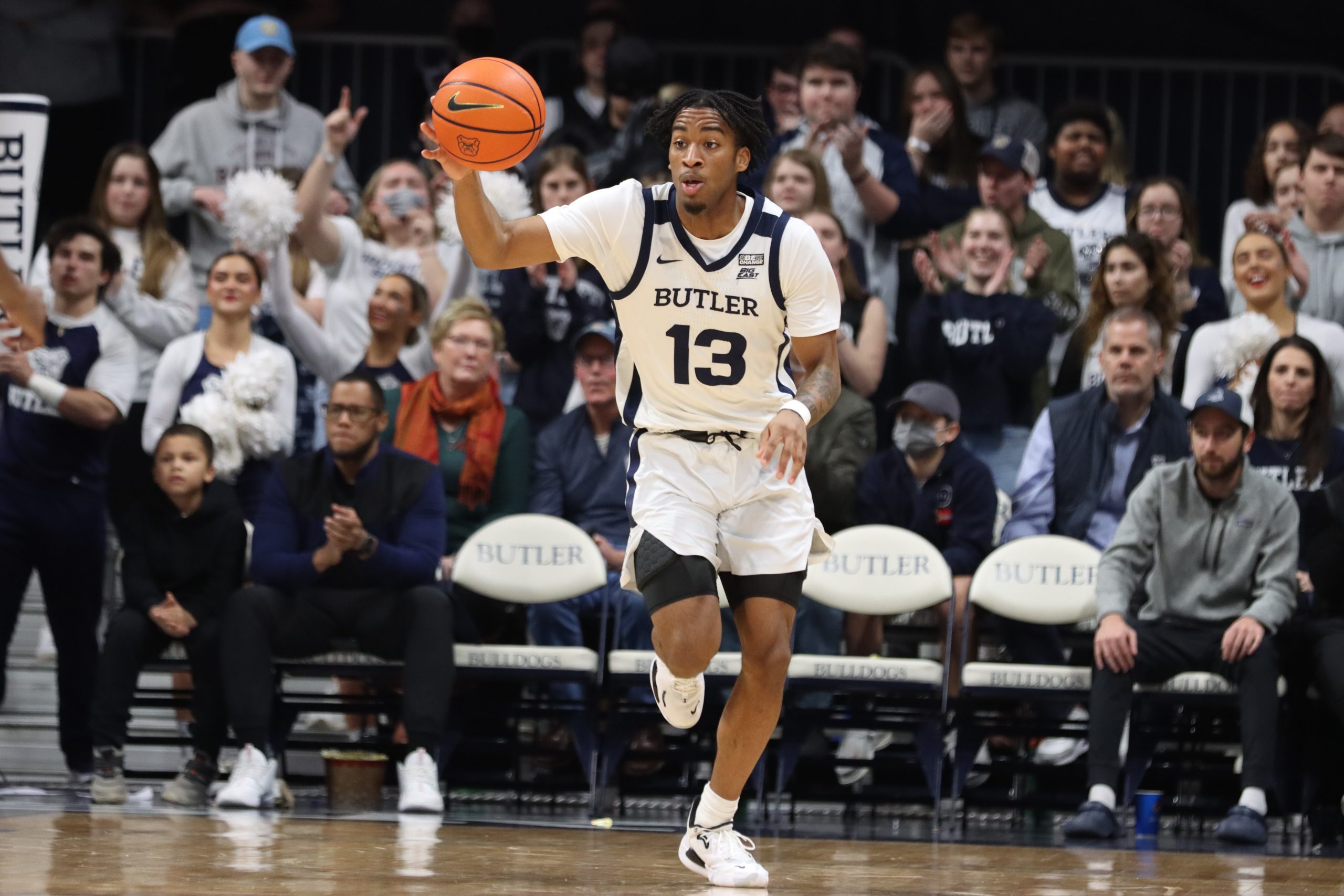 Jayden Taylor takes the ball up the floor in Butler win over Marquette on Feb. 12. Photo by Francie Wilson.

The Butler men’s basketball team was blown out last night by St. John’s by a final score of 91-57. Julian Champagnie led the way for St. John’s with 31 points, seven rebounds and an absurd seven steals. Posh Alexander recorded a double-double with 13 points and 10 assists. Jayden Taylor was the only Bulldog in double figures with 19 points. St. John’s moves to 15-11 on the season and Butler falls to 13-14.

The Bulldogs kept pace with St. John’s for the first 13 minutes of the game and held a 20-19 lead with just over seven minutes to play in the first half. But St. John’s unleashed a 27-10 run in the last seven minutes, capped off by two 3-pointers in the final 30 seconds, including a deep shot that banked in as the buzzer sounded.

The second half emulated those final seven minutes, as Butler could not find open looks against an aggressive Red Storm defense and were torn to shreds on the other end of the floor by Champagnie and company.

Let’s go beyond the box score in a game Bulldog fans would like to forget.

Butler could not keep up

Heading into this game, St. John’s was eighth in all of college basketball in pace of play — calculated simply by the number of offensive possessions per game. Butler ranked 336th, and the massive disparity showed.

Butler turned the ball over 14 times, and while St. John’s had 16 of their own, the Red Storm were much better at pushing the pace to get good shots at the other end. The ball movement from St. John’s was excellent and had Butler looking completely lost on defense. The Red Storm had 23 assists on 35 made field goals, making it very clear why they lead the Big East in assists per game.

After Butler went down big, any effort or intensity they had been playing with went by the wayside. Butler was dominated on the boards 35-21. While much of that has to do with not playing good enough defense to force missed shots, they did a poor job of boxing out and crashing the glass. St. John’s only had five offensive rebounds, yet somehow turned that into 13 second-chance points. The team missed Bo Hodges badly in this area but being without a single player is not a good enough excuse to get dominated on the interior like that.

The most damning aspect of Butler’s game was on the charity stripe. Butler shot just 9-21 from the free throw line, an abysmal 43%. D.J. Hughes was 1-7 from the line, the typically good shooter Chuck Harris was 2-4 and Myles Tate was 0-2 in his first game since Jan. 26. There is no other way around it — Butler was not locked in. In a game that could have had Butler jump up to seventh in the conference, the team folded. Whether that is on the coaches, the players or both, there is no excuse for playing that poorly.

Quite literally the only Bulldog that played well was freshman Taylor. In addition to hit 19 points on 6-14 shooting and 4-6 from three, Taylor had six rebounds and four assists, both leading the team. Taylor was also tasked with guarding Julian Champagnie for much of the game, and while that didn’t go well, the sheer effort required to guard the Big East’s leading scorer makes his offensive numbers that much more impressive.

Taylor is now Butler’s second leading scorer on the season behind Chuck Harris and has scored double-digits in four of the last six games. Taylor is by far the best on the team at getting to the free throw line and is third on the team in free throw percentage behind Jair Bolden and Simas Lukosius.

Taylor’s length and athleticism gives him significant upside on the defensive end as well. Like every other Bulldog, he still gets beat, but he has the tools to improve and be a very good defender.

With Taylor coming into his own alongside Lukosius, and D.J. Hughes showing flashes of being a good, yet undersized, big, the future of the Butler men’s basketball program looks bright.

Butler will be back in Hinkle Fieldhouse tomorrow, Feb. 20, to take on No. 8 Providence. The Friars currently are atop the Big East standings and have lost just one conference road game this season. Then, Butler will go on the last road trip of the season to take on Seton Hall on Feb. 23 and Marquette on Feb. 26, before finishing out the season at home against No. 10 Villanova.