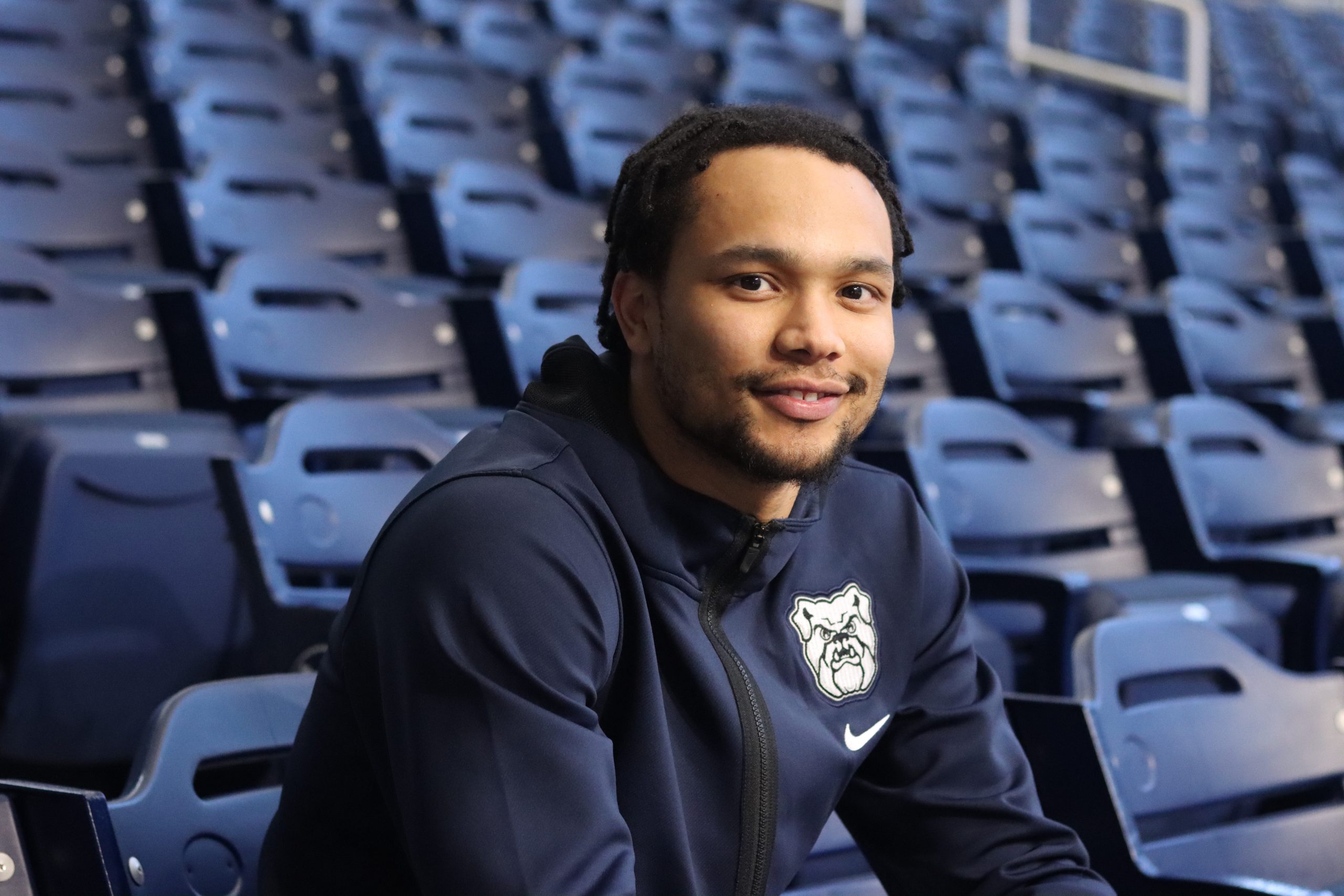 Creating merchandise, customizing t-shirts and securing advertising deals became a reality for college athletes on July 1, 2021. As athletes across the country strategized how to use their name, image and likeness for the first time in recent NCAA history — Jair Bolden, graduate guard on the Butler men’s basketball team, looked at the bigger picture.

Admittedly, Bolden thought of ways he too could use his name, image and likeness to get some pocket change, but he ultimately decided to use these new regulations to benefit others.

“I’m like, if I have enough time, energy and effort to be able to do that then I should be able to do something that I’ve always wanted to do, my entire life, which is help other people,” Bolden said.

Ever since he was a child, Bolden said, he simply wanted to find ways to help people. Bolden had various ideas on how to do just that, but something always seemed to hold him back — whether it was feeling under qualified or struggling to find the time.

In the summer of 2021, Bolden founded the Grey Rose Foundation, which according to the website, is “dedicated to using the game of basketball as a tool to engage with youth and disenfranchised communities.” Bolden said the formation of the Grey Rose Foundation was a culmination of his childhood intention of helping others along with looking towards his life after college.

“It wasn’t like some ‘ah ha’ moment I had,” Bolden said. “[I was] just kind of tired of waiting, tired of pushing things off. You only get one life and you gotta try and do the things you want to do right away.”

For Bolden, the Grey Rose Foundation is a way to use a game he loves to help people who have not been given the same opportunities. One of the ways the foundation aims to do this is by refurbishing basketball courts in Zimbabwe.

From its name to its kickoff project, family and community are woven into the foundation. The Grey Rose Foundation, according to the website, was named after Jair’s siblings, 8-year-old Grey Thomas Bolden and 7-year-old Kaya Rose Kalomiris.

There are qualities of both Grey Thomas and Kaya Rose that Bolden hopes shine through the foundation.

“They’re both so unique and so intelligent and loving,” Bolden said. “They just loved me for the fact that I’m their big brother and they love coming to games and they love seeing me play and I could have 30 points or zero points they still love me the same, wanna call me, wanna talk to me, and you know just that love that they have for me, for their family members for their friends. Obviously, they’re very young right now, so their personalities are still forming and growing every day, they’re so inquisitive. But, I’d say at a base principle just the love that they have, I would love to see that continued in the Grey Rose foundation.”

In using the names of his brother and sister, Bolden hopes to leave a legacy for his siblings.

“I just want them to be proud of me, so that they can one day say my big brother, not only was he a Division I basketball player, the first person in the family to get a master’s degree, but he also left his mark on this world in more ways than just his own goals and his own aspirations and he helped others,” Bolden said. “If they can one day be proud and say that they have something named after them and hopefully carry it on and continue to do great things with it, that would mean the world to me.”

Bryce Golden, a senior forward on the Butler men’s basketball team, said ever since he met Bolden, he always knew it was about more than basketball.

As his teammate and friend, Golden said he is not only proud of what Bolden has accomplished, but excited to see what he will do in the future.

“Jair can do whatever he wants with it,” Golden said. “He’s always been someone that loves kids, loves helping out, always willing to give advice, give a helping hand to whoever needs it. So, it’s going to be interesting to see whichever way he takes it it’s going to be successful just because [of] knowing Jair, knowing the person he is.”

Family is far-reaching for Bolden and is in part why refurbishing the Rita D’Almeida basketball courts in Zimbabwe will be the Grey Rose Foundation’s first project.

Bolden’s great-grandmother founded the courts, which have since become run-down due to economic struggles, political unrest and other hardships that have left them unusable. The Grey Rose Foundation is currently raising $10,000 to refurbish the courts, something Bolden said is important to his family and the community alike.

“As the great-grandson of [Rita and John D’Almeida], I felt like it was a great opportunity for me to impact the community that I am not really as much a part of as I’d like to be because I’ve been in America my whole life, I was born here but I know it’s something that means so much to my mom and to my grandmother,” Bolden said. “For them to see my great-grandmother in heaven smiling down on the court that we were able to refurbish and I feel like that would just be a great first project to start.”

The Rita D’Almeida courts, according to the website, used to be a vibrant part of the community, hosting tournaments and serving as recreational space for community members.

Providing courts and resources for youth is a driving force for the Grey Rose Foundation. Bolden said, having this access was important to his development as a player.

“I just think about when I was a kid if I didn’t have a usable basketball court in my area, what would I be doing with my time — probably nothing good,” Bolden said.

While Bolden doesn’t know where the Grey Rose Foundation will take him, whether it be his mother’s roots in Zimbabwe or his home of Brooklyn, the dream stretches beyond the court.

Down the line, Bolden hopes to create a basketball facility, where children can work on homework, find mentors and above all, have a safe haven. Along with a physical space, Bolden wants to one day be able to give children mentors, like those who influenced his childhood.

“Hopefully I’ll have people that will be able to mentor these kids and kind of just be what I had so much of growing up, mentors and older family members and friends that were looking out after me,” Bolden said. “I was blessed with so many things that others aren’t. [The dream is to] open up a facility to train kids and tutor, just a safe haven in a community that might not have that.”

“There’s a lot of other things he could have [done] with his name and his likeness, but I think it’s cool it’s for this next generation,” Bates-Diop said. “Just young kids trying to have a safe place to hoop, a safe place to go somewhere outside of school, things like that.”

Sharing its first Instagram post on Jan. 25, the Grey Rose Foundation is still in its beginnings, but as of Feb. 8, the Foundation had raised $2,660 towards their $10,000 goal. Donations are currently being accepted to help refurbish the Rita D’Almeida basketball courts on the Grey Rose website.

While monetary donations will be necessary to restore the courts, Bolden said he does not wish to limit the ways in which people can give back. Bolden encouraged people hoping to share unique gifts or talents to contact the Grey Rose Foundation via Instagram about ways they can help.

Although the Grey Rose Foundation has only just begun, Golden believes that Bolden’s humility will allow the organization to thrive.

“I think the biggest thing with Jair, he’s always had a bigger picture mindset,” Golden said. “It’s never been about just him or the space he’s at. He’s always been a cerebral thinker, thinking about how fortunate he is in his situation, how other people aren’t always as fortunate as him and he’s always had that perspective on life, that’s gotten him a long way, just keeping that perspective and staying humble. Realizing his position and using that position to help people in need.”

With six years as a collegiate athlete, and basketball guiding the mission of the Grey Rose Foundation, Bolden said what basketball has taught him cannot be reduced down to one lesson.

“In basketball it doesn’t matter if you have a great game and your team loses … you all have a role and a part to play of a team and a university that is bigger than yourself,” Bolden said. “Just kind of taking that into everyday life, as humans we’re part of something that’s bigger than ourselves, as a family member, as a brother you are always part of something that is bigger than you, that you represent, and I think basketball really taught me that and shined a light upon that.”