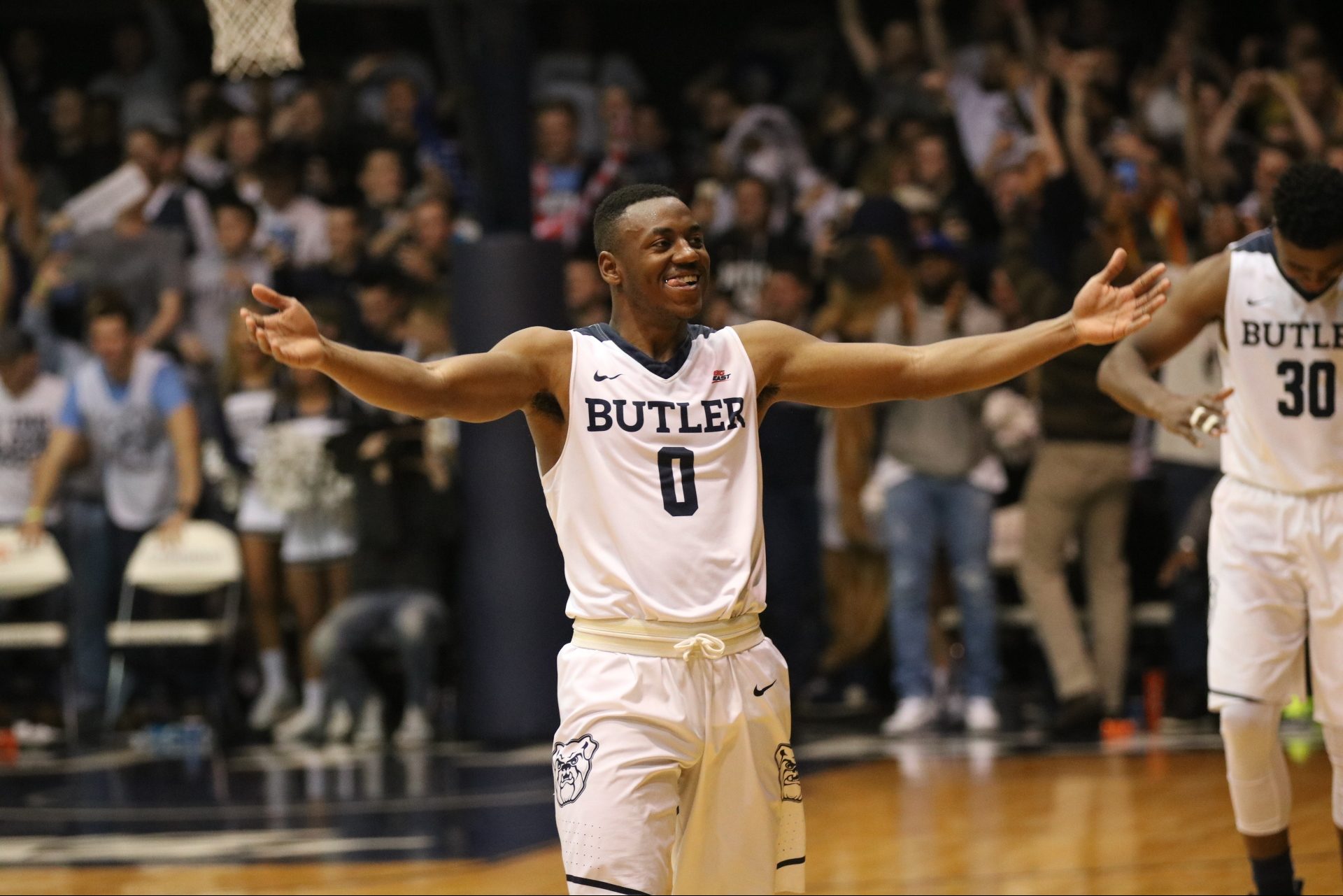 Avery Woodson holds his arms out in celebration towards the end of the game. Woodson ended the night with eight points and three rebounds.

The No. 18 Butler University men’s basketball team handed the No. 1 Villanova Wildcats their first loss of the season after winning 66-58 in a sold out Hinkle Fieldhouse on Jan. 4.

With five minutes left in the game, both teams were tied at 47. From there, Kethan Savage, Avery Woodson and Kelan Martin finished close range shots before Kamar Baldwin stole the ball from Josh Hart near half court and banked in a reverse layup to put the Bulldogs in position to ice the game with free throws. Butler was a perfect 15-of-15 from the free throw line.

“This is the type of game that I’ve always wanted to play in,” Savage said. “To be able to come out here and play with my brothers and my teammates tonight, it’s something special, and I’m going to remember this night for the rest of my life.”

Unbelievable night (and atmosphere) at Hinkle tonight. Enjoy it one more time… pic.twitter.com/eRz4Bu6v5d

For Villanova (14-1, 2-1 Big East), their top three players each reached double figures in scoring. Jalen Brunson led the way with 23 points, Hart poured in 13 points and Kris Jenkins ended with 11.

Due to a spirited defensive showing, the Bulldogs held Villanova to a 37% field goal shooting performance. Neither team shot well from behind the three point line as they were a combined 11-of-46 from behind the arc.

“We felt like if we could make it ugly on the defensive end we’d give ourselves a chance,” head coach Chris Holtmann said.

Butler had a distinct advantage in the rebounding category as they secured 33 rebounds to Villanova’s 24.

In the first half, the Bulldogs turned the ball over five times, shot 39% from the field and 21% from three point range, yet they only trailed 31-27 going into the locker room.

The win marked the first time Butler has ever beaten the Wildcats; the Bulldogs were 0-7 in this matchup going into the game. Furthermore, this was the first time fans at Hinkle Fieldhouse witnessed a Butler team beat a No. 1 ranked opponent in the 89 year old venue’s history. Villanova also hadn’t lost a game since the Big East Tournament on March 12, 2016

Butler will travel to Washington, D.C., to take on the Georgetown Hoyas on Jan. 7 at noon.