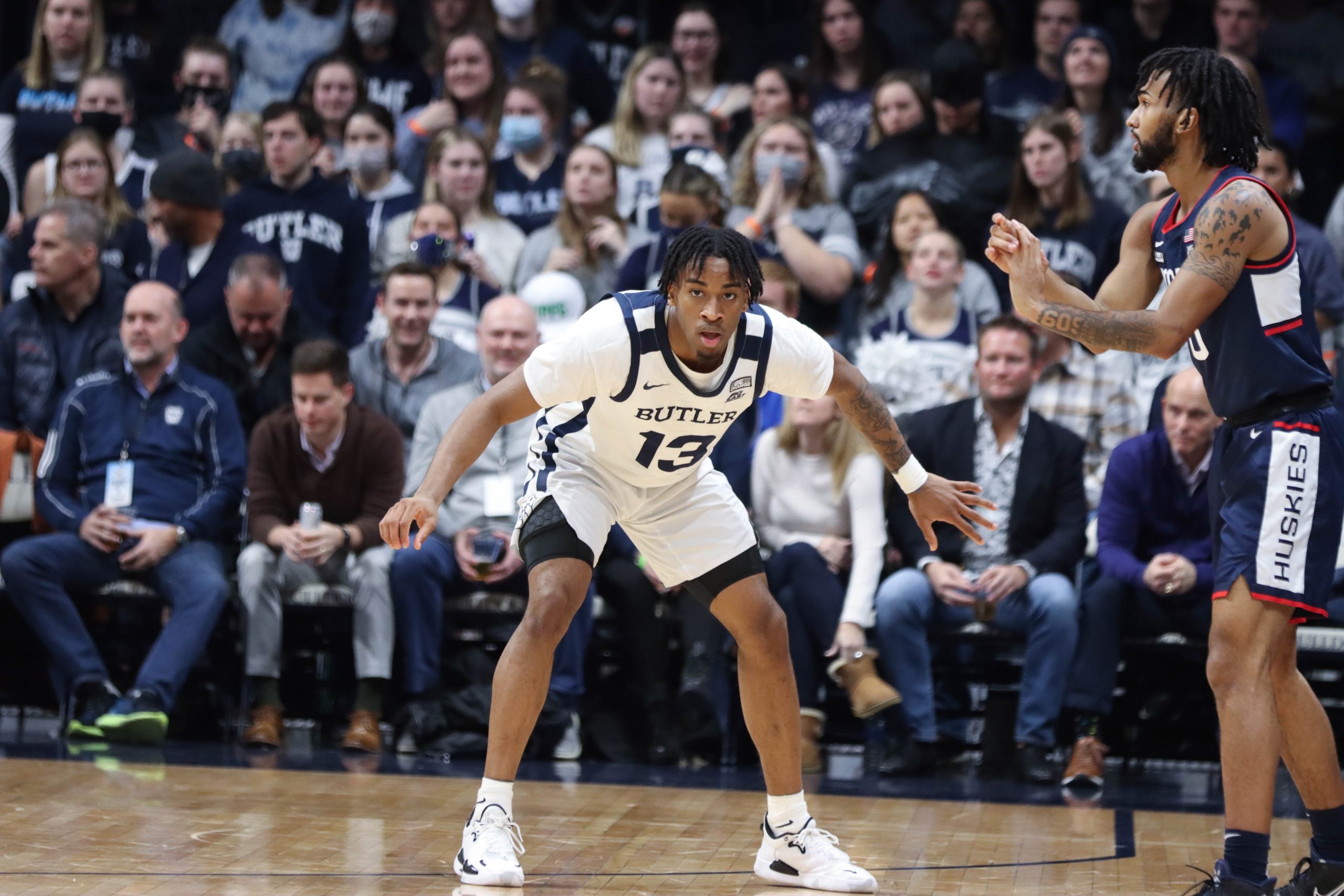 Freshman Jayden Taylor gets into a defensive stance against UConn on Jan. 20. Photo taken by Francie Wilson.

The Butler men’s basketball team is set to take on Creighton later today. This will be the team’s first game versus an unranked opponent in two weeks. Butler has lost six of its last seven games, all six coming against teams ranked in the AP Top 25 during their contest.

After Sunday’s loss to Providence, Butler fell below .500 for the first time this season. The team is currently 2-6 in Big East play, placing them ninth in the 11-team conference. Creighton, on the other hand, sits at 4-2 in conference play and tied for fourth.

Butler has shown long stretches of promise in the last two contests versus Top 25 teams, but fell short in the end due to an inability to slow down the opposition’s best player and not being able to score in crunch-time. However, for the majority of the game versus Providence on Jan. 23 and UConn on Jan. 20, the Bulldogs looked as good — if not better — than the other team. Playing at that level for a full 40 minutes is key, but the past two games have shown Butler can compete with the top teams in the conference.

Here’s what you need to know as the Bulldogs look to get back to winning ways versus the Bluejays.

Effects of the brutal schedule

While there are no excuses for Butler’s horrific offensive numbers, bad free throw percentage and inability to guard big men, it is worth putting into perspective how difficult Butler’s schedule has been this season. The most recent AP Poll had seven teams Butler has played this season in the Top 25, with three in the Top 10. Three other teams Butler has played received votes in the latest poll.

According to the stat-god Kenpom, Butler has played the fourth most difficult schedule of any Division I team, facing the sixth most efficient total offense and the sixth most efficient total defense over the course of the season. This is especially impressive given Butler opened up the season against the Kenpom’s worst ranked team of all 358 Division I teams, IUPUI, have played two more teams in the bottom 30 — No. 355 Eastern Illinois and No. 331 Central Arkansas — as well as two Division II teams.

While past Butler teams have consistently shown up in big games against top tier opponents, it’s understandable if that’s not the case year-in year-out. Also, two of Butler’s toughest opponents, current No. 10 Michigan State and No. 7 Houston, came very early in the season as the team was still in the process of finding the right rotation and play-style. Then, an embarrassing loss to current No. 6 Purdue in the last game before Big East play halted all momentum of a four-game winning streak that included a road win over Oklahoma.

To reiterate, this team is flawed offensively and has taken a clear step back defensively, but consistently playing the best teams in the country has given the players little room for error in the majority of games this season.

Now, Butler’s next five games feature four unranked opponents, with three games played at Hinkle Fieldhouse. While excuses can be made for the last four games against ranked opponents, those excuses go out the window in this two week stretch. It is now or never for this team to get on track.

While Creighton does not have quite the resume of some of previous Butler opponents, they are a very good basketball team. By far the Bluejays best performance of the season was a 20-point rout of Villanova in Omaha on Dec. 17, although the Wildcats got revenge a few weeks later with a 34-point win in Philadelphia.

Kenpom has Creighton ranked at No. 47 in adjusted efficiency, nine spots higher than current Big East leader Providence. Creighton’s 34th ranked defense will cause Butler the most headaches, especially with the Bluejays great interior presence.

Ryan Kalkbrenner is the center of this elite defense. The 7-feet-1-inch center is averaging 3.1 blocks per game this season and has recorded five or more in six games this season. Kalkbrenner has also established himself as an elite rebounder, particularly on the offensive glass, as he leads the Big East in offensive rebounds per game.

Kalkbrenner’s partner in the frontcourt, 6-foot-7-inch Ryan Hawkins, won’t be any easier for Butler, as he leads the Bluejays in scoring and ranks eighth in the conference in rebounding. Butler has had difficulties defending bigs all season, and the Bulldogs will certainly have a handful trying to contain two.

However, if Butler maintains the new starting lineup featured in the Providence game — Aaron Thompson, Chuck Harris, Bo Hodges, Bryce Nze and Bryce Golden — they will likely have a better chance. Hodges played great on both sides of the ball versus the Friars, providing energy and athleticism that no one else on the team possesses. Prior to the Providence game, Butler was outrebounded by 10 or more in three straight games. With Hodges in the starting lineup, Providence outrebounded Butler by just three. If Hodges can provide that same spark versus Creighton, the Bulldogs have a shot to steal the win.