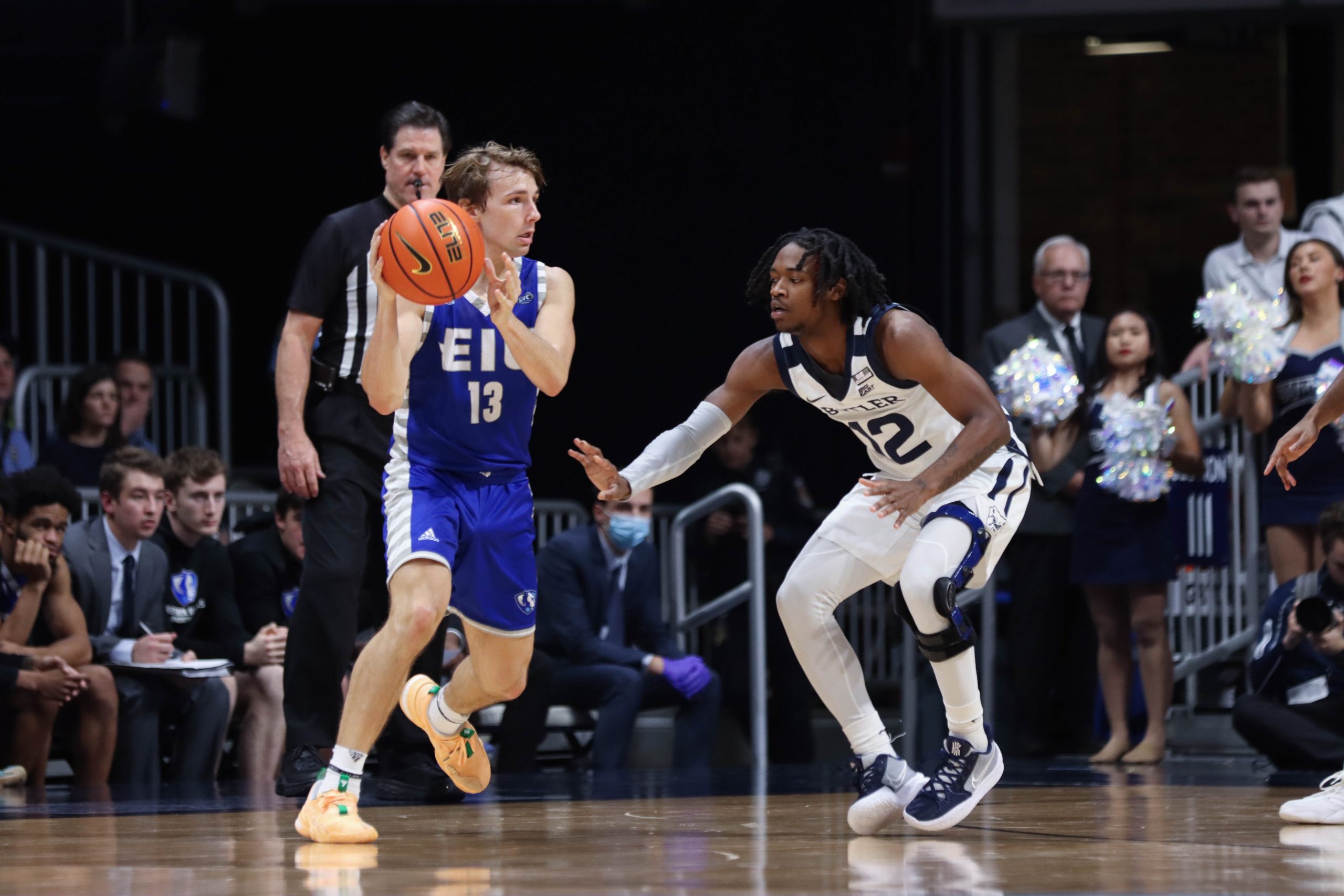 The Butler men’s basketball defeated Eastern Illinois 66-54 on Dec. 11 at Hinkle Fieldhouse. The Bulldogs move to 7-3 on the season and have won four consecutive games. Bryce Golden led all scorers and tied his career high in points with 20 points. Aaron Thompson added a double-double, scoring 14 points and racking up 10 assists.

Sophomore guard Myles Tate made his season debut as well, nine months to the day after tearing his left ACL in Butler’s final game last year. Tate saw four minutes of playing time, and while he was clearly not all the way back to his freshman self, he showed flashes with two nice drives to the rim.

In what was Butler’s final “easy” non-conference game, the team cruised to a win and looked good for much of the game. Let’s go beyond the box score for Butler’s seventh win of the season.

Thompson was simply fantastic versus SIU. His 14 points are the most he has scored this season, and he was very efficient. He only took eight shots yet took seven free throws. Thompson has not been a great free throw shooter in his career — just 57% — but he knocked down six tonight.

His 10 assists to just one turnover is an impressive ratio, and he was attempting tough passes throughout the game. He assisted three Ty Groce alley-oops, a full-court dime to Jayden Taylor and multiple entry passes on the inside to Golden. Thompson easily could have had more assists too, but a few of his passes resulted in missed layups.

Anyone that watches Butler basketball knows Thompson is more than just a true-point guard on offense — he’s an excellent defender. His two steals and a block show just that.

The best Thompson stat of the night, however, was his eight fouls drawn. Many of these were on offense, both shooting and drawing non-shooting fouls. He drew two charges in the second half, showcasing his willingness to sacrifice his body for possession. After the game, Thompson said his uptick in drawing fouls is not an accident.

“I think I do a good job at drawing fouls,” Thompson said. “I think I’ve grown at that over the years. Learning how to draw fouls and when I can and when refs are telling me to not flop and stuff like that. I want to make it realistic, so I think I’ve done a good job at that. It helped tonight; I made my free throws.”

Bryce Golden started off this season looking like a different player than he has been for Butler in the past. Golden averaged 10.4 points per game last year, proving to be an important offensive player for Butler on the interior. After scoring 12 in Butler’s second game, he had a four-game stretch where he scored just eight points combined and had three straight games without scoring a field goal.

Since that rough stretch, Golden has scored in double figures in each of the last four games, shooting an impressive 70% over those contests. Were two of those games against Division II schools? Yes, and that cannot be ignored. But he played an important role in Butler’s upset over Oklahoma — who by the way just destroyed No. 12 Arkansas — and he clearly has his confidence back. Postgame, Golden said his teammates gave him the confidence to start playing his game again.

“Obviously I started off a little bit slow, but no one lost faith in me,” Golden said. “I kind of just fed off that energy and obviously I’ve had some success over the last few games, but it all came from my teammates believing in me. Obviously, I’m a senior, so guys trust me, guys want me to be out there, guys believe in me, so that’s really all it comes from.”

Head coach LaVall Jordan played nine players over 15 minutes — 14:59 if you want to be technical — and is obviously working on getting Tate back in the lineup. Jordan is living by the phrase “there’s no I in team,” as he moved Chuck Harris to the bench for the past three games and did not play Myles Wilmoth at all tonight. Jordan said with Christian David, D.J. Hughes and Ty Groce are all playing so well at the moment, he decided to stick with them for the game. However, Wilmoth will continue to play a role on this team.

With so many capable players on the roster, it would be impossible for all of them to play every given game. With the nine players who played significant minutes tonight, Wilmoth, Tate and the eventual returns of Bryce Nze and Bo Hodges, some players are bound to get the short end of the stick. Jordan said after the game that the plan as of now is to redshirt Pierce Thomas, but that decision will not be finalized until the end of the year because of the chance for injuries.

Reducing minutes of players or not playing them at all has the potential to affect the locker room, but Jordan has sent a message to the team telling them to be ready for their moment at any time.“

As we keep preaching to the group, just stay ready,” Jordan said. “Stay ready. D.J. Hughes stayed ready. Christian David stayed ready. Myles is gonna have his nights. Obviously, Chuck with Tate back in the lineup. This group embracing the fact that it could be anybody on any given night. That’s a great thing. And now emotionally you gotta be able to handle it with some maturity and compete every day in practice.”

Time will tell how well this strategy works and who will see less playing time as injured players return, but it is never a bad thing to have too many good players.

Before Big East play kicks off on Dec. 23, Butler will compete in the final Crossroads Classic at Gainbridge Fieldhouse against current No. 1 Purdue. The Bulldogs will fight for the improbable upset on Dec. 18 at noon.