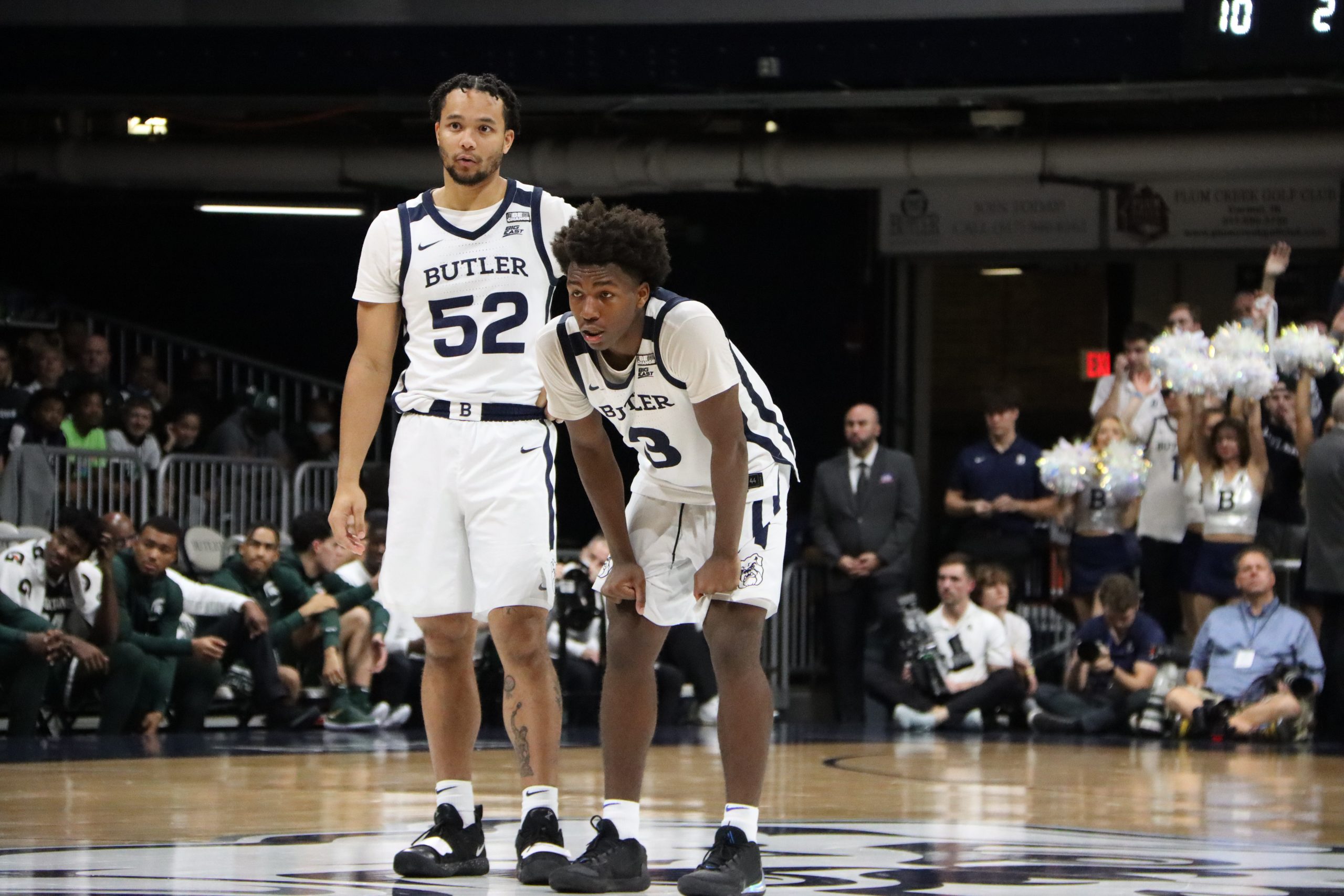 Guards Jair Bolden, 52, and Chuck Harris, 3, stand at halfcourt during a game against Michigan State on Nov. 17. Photo taken by Francie Wilson.

The Butler men’s basketball team drops to 3-2 on the season following a 70-52 loss to the No. 12 Houston Cougars. This was their first game of the Maui Jim Maui Invitational, which is being held in Las Vegas, Nevada this year. It was another tough night for the Bulldogs offensively, as they shot 37% from the floor on 15 of 41 attempts. This is the third game this season that Butler failed to have 20 made field goals — also failing to do so against IUPUI and Michigan State.

In a lopsided affair where Houston led for nearly 39 out of the 40 minutes of play, there were few positives. Let’s go beyond the score on a game that the Bulldogs would like to forget.

Right out of the gate, it was clear that the Butler offense was missing Nze’s presence. Houston opened the game on a 17-0 run, and from then on Butler couldn’t seem to overcome the large deficit.

Bolden was the only thing keeping Butler somewhat in the game, hitting five of his first seven shots and scoring 15 of Butler’s 20 first-half points. However, Houston made it their mission to stop him in the second half, as he only scored one point the rest of the game.

The Bulldogs’ offense looked stagnant throughout the game. With no outlet in the paint, Butler’s offense was reduced to a bunch of ball-screens that turned into a lot of dribbling one-on-one before a contested jumper was attempted. This led to either a missed shot or turnover far too often.

Give credit to a talented Houston team

With or without Nze on the court today, the Bulldogs were simply outmatched. The Houston Cougars — who made a trip to the Final Four last season — put on full display how good they can be when they play their best defensively and offensively. They are ranked 12th in the country for a reason.

The Houston defense, touted as one of the best in the nation, is as advertised. The Cougars forced 20 turnovers — two of which were shot clock violations — and recorded 11 steals and four blocks. One thing that Butler did do well though, was rebound. While the Cougars had 28 boards, the Bulldogs were close behind with 26 of their own.

What set Houston apart in this game was their ability to knock down their shots. Senior Fabian White Jr. led the way for the Cougars with 21 points, as the team shot a combined 51% from the field.

What to expect going forward

The good thing about playing in the Maui Invitational is that the Dawgs have a chance to wash out the bad taste of this loss tomorrow against Texas A&M. Butler will look to shoot the ball much better than they have as of late, starting with getting Chuck Harris going. It is safe to say that Nze is doubtful at best for tomorrow’s game, meaning that Harris will need to step up as an option for the Dawgs when they need a bucket.

Also with Nze’s injury, it has left a void that has been filled with Groce, junior John-Michael Mulloy and freshman D.J. Hughes. They will be important in defending opposing bigs and making up for the loss of rebounding that the Bulldogs will experience until Nze returns. Senior Bryce Golden — who has scored only one point in the last three games — will also need to be more aggressive in the paint.