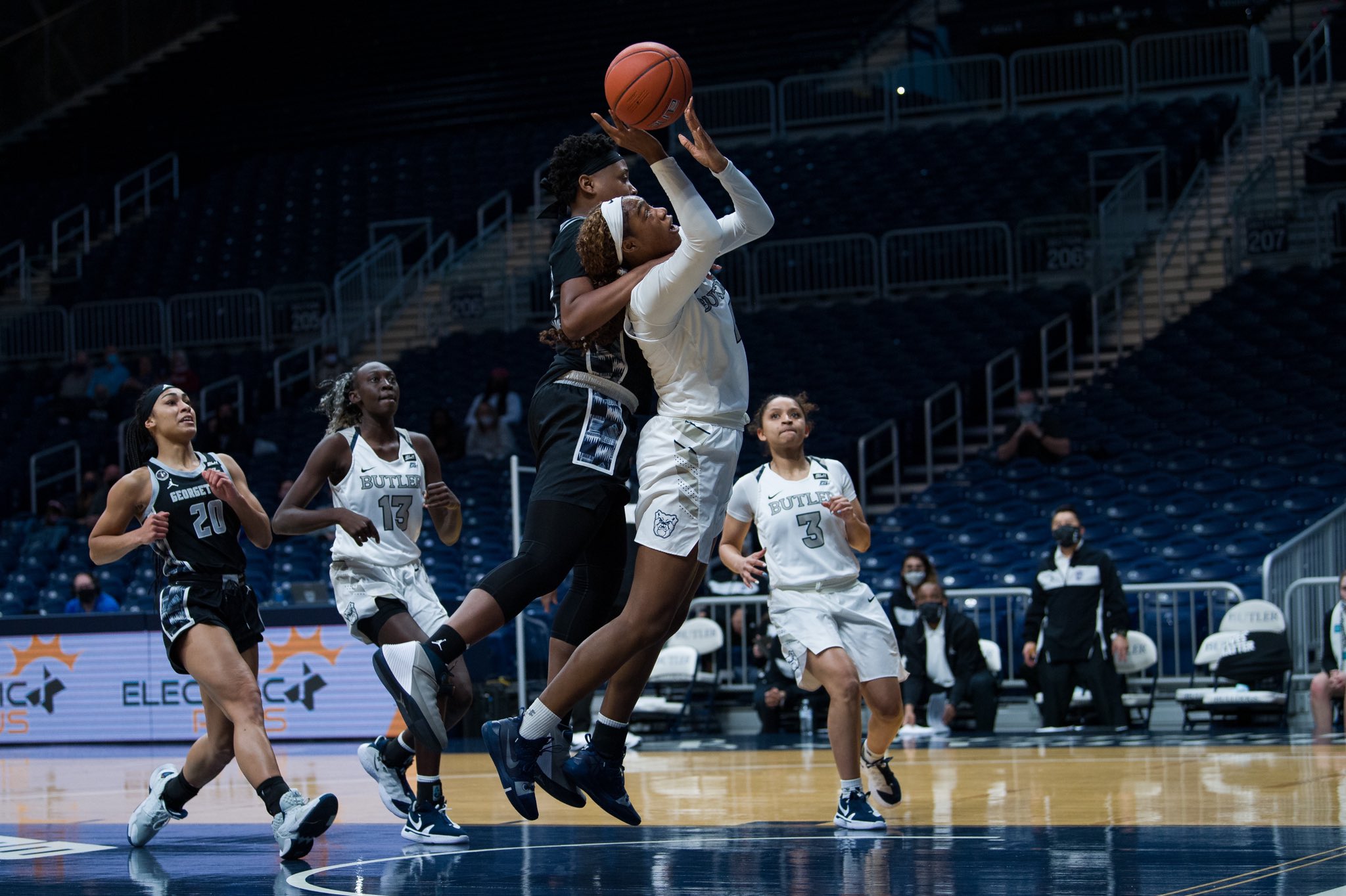 Butler’s Okako Adika makes a shot attempt while being fouled in the Bulldogs’ win over Georgetown earlier this season. Adika leads the team in scoring, averaging 13.6 points per game. Photo courtesy of Butler Athletics.

The 2020-21 Butler women’s basketball season has not gone as planned. Going into the season, the feeling around the team was positive; they had their sights set on the Big East regular season title and on their first NCAA tournament appearance since 1996 — only the second in program history. Instead, Butler sits at 1-12. Their hopes of achieving those preseason goals are essentially out of reach. But, just because of the team’s poor record, don’t expect them to roll over for the rest of the season.

“It’s still not out of reach to finish in the middle of the pack in the Big East,” Godlevske said. “We’ve just got to get everyone healthy and get back to playing well. But I just want to see us get better every day and get to compete at the level that I think we can.”

Of course a coach would want his team to improve, but this tricky situation has been undeniably different than most. COVID-19 forced the team to miss seven weeks of practice ahead of the season, meaning that the Bulldogs have never really been able to get their feet under them.

With so much practice missed, Godlevske said they missed crucial time to create chemistry on the court, practice five-on-five situations and get into shape to play a full 40 minutes. One of their biggest struggles on defense — sound rotations — is symptomatic of limited practice time.

Due to COVID-19, the Bulldogs played no non-conference games or scrimmages at the beginning of the season. The season finally started on Dec. 5 versus Providence, a team with five games under their belt, including four versus non-conference opponents. The Bulldogs lost that game, in what was essentially a preseason matchup for them.

They lost their next two in blowouts to Creighton and No. 19 Michigan over the following four days, before COVID-19 caused Butler to shut down for 22 days. Four games were postponed or cancelled over that stretch in December, creating a total of seven games postponed throughout the season.

That doesn’t even count the plethora of games that have been moved around by the Big East to comply with other schools adhering to COVID-19 protocols. The Big East has shuffled games around all season — like the time Butler was forced to travel to Rhode Island to play Providence on 48 hours’ notice for a game that was scheduled for more than a month in the future. So if Butler entered games rusty — which they have — it was understandable.

When they finally returned to play on New Year’s Eve, they faced Georgetown on the road with only seven available players. They started off well, but lack of stamina slowed them down in the second half. The Bulldogs had over a week before their next game and were able to get players back from injury and COVID-19 protocol. They played better over their next three games than they did during their first four, but still found themselves winless through their first seven games.

With the team finally at full strength and able to get practices under their belt, the Bulldogs finally broke into the win column with a home win over Georgetown. They showed defensive prowess, holding the Hoyas to 23.1% shooting and just over 10% from beyond the arc. Even with the Bulldogs not playing their best offensive game, they won by nearly 20 points, proving they are not a team to take lightly.

However, following that game just as the team could have gotten momentum going, more adversity hit. Starting guard Upe Atosu and rotation forward Nyamer Diew suffered injuries and have been sidelined five and four games, respectively, with Diew making her return on Jan. 31 versus Villanova. Making matters worse, the only true center on the team, Rosemarie Dumont, suffered an injury on Jan. 21 versus DePaul, causing her to miss the last two games. The main casualty of the loss of these three players is Butler’s defense, proven by Atosu still leading the team in steals despite missing the last four games.

Butler has lost now five in a row since their only win of the season, although it is worth noting they have played the top five teams in the conference in that stretch, with all five teams boasting winning percentages above .700.

Godlevske expects both Dumont and Atosu to return in the near future. With those two returning and the rest of the team getting into basketball shape, Godlevske said he believes now is the time when the Bulldogs will finally show what they are made of.

“We’re just now, with those seven-eight kids that have been playing for the last week and a half, just now starting to get into pretty good shape where we can compete and give great effort for longer durations,” Godlevske said.

With the Bulldogs currently sitting last in the Big East standings, their next few games are critical to improve their rank in the conference. Butler’s next game is scheduled for Feb. 10 versus Marquette in Milwaukee — a team they recently lost to by 38 points.

After that game, Butler will play St. John’s on Feb. 13, a team who boasts a 2-7 conference record, at Hinkle. That will be followed up by two games versus archrival Xavier, a team with just one conference win, as well as tougher matchups versus Villanova and UConn’s first Big East trip to Hinkle Fieldhouse. The opportunities are there for the Bulldogs to salvage this whacky season, they just need to play a full 40 minutes in those games to do so.