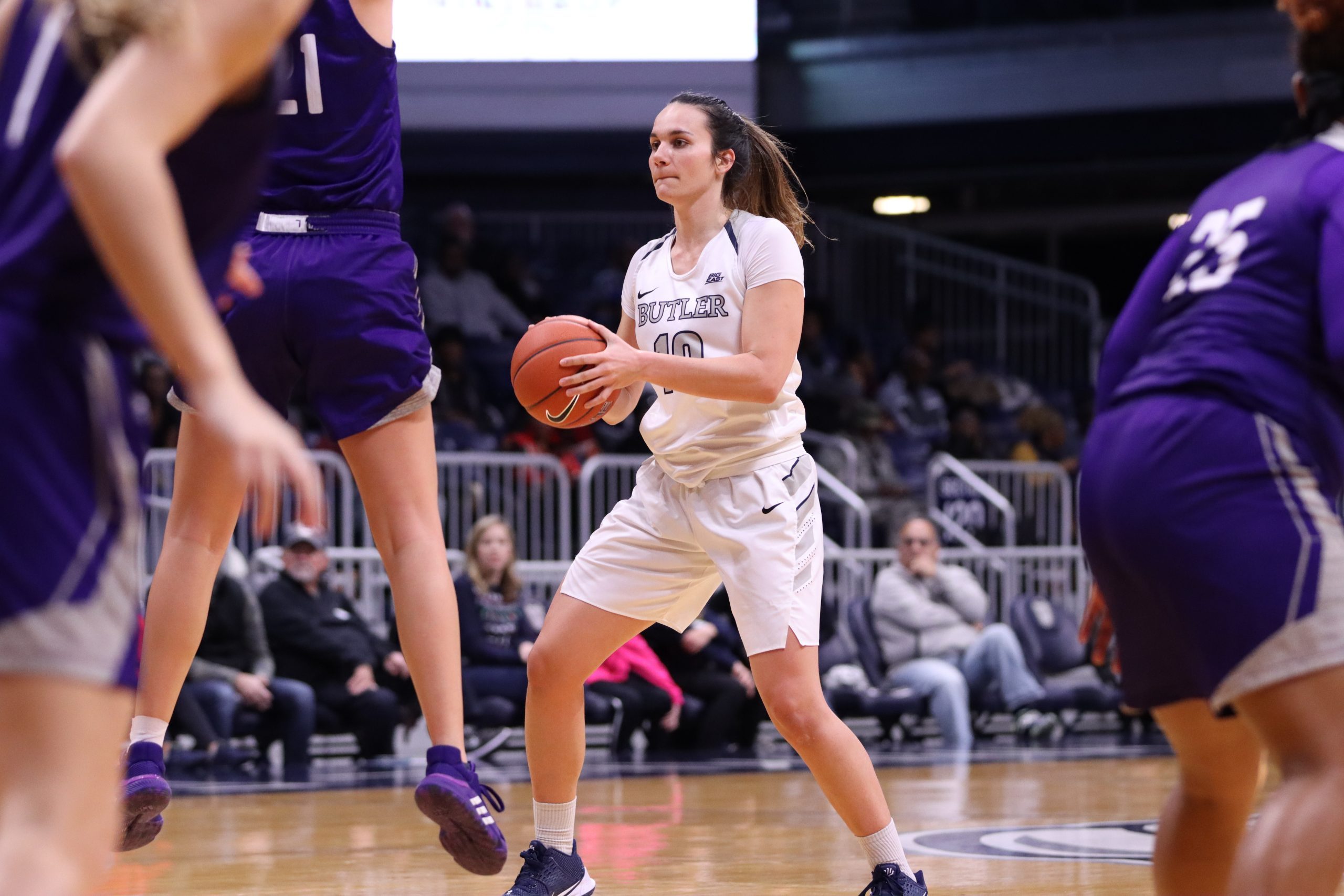 Naira Caceres prepares to make a move in a game last season. Caceres scored 8 points on 3-6 shooting, but the star of the show was Okako Adika, who scored 29 points in her Division I debut. Providence defeated Butler, 73-52. Collegian file photo.

In their first game of the 2020-21 season, the Butler women’s basketball team fell to Providence 73-52 at Hinkle Fieldhouse. Butler’s Okako Adika led all scorers with 29 in her Division I debut.

It’s not too much of a surprise that Butler got off to a slow start, as it was their first game since March, and Providence had already played five games this season. The Friars looked sharp in the first half, while the Bulldogs looked lost at times defensively. The Bulldogs were also without five players; Jaia Alexander, Emilia Sexton, Micah Sheetz, Oumou Toure and Genesis Parker. All five were set to have important roles in the team, and with depth as one of the biggest strengths of the team, their presence was missed.

Head coach Kurt Godlevske said that although there were a lot of factors going against them, he was still disappointed in their defensive effort in the first half. At halftime, he told the team that they would be in for a long year if they continued to defend like they did in the first two quarters.

Butler came out of halftime and played much better, outscoring Providence 28-24 in the final 20 minutes. The team moved into a 2-3 zone, which Providence found much more difficult to break down. Junior forward Okako Adika shined in her Butler debut, scoring 29 points on 10/21 shooting and 6-6 from the free throw line. She added six rebounds and a block in addition to her impressive scoring output. Godlevske was happy with her performance, but thought she could have done even more.

“She passed on a lot of other opportunities where she could have taken shots,” he said. “But, she’s a pretty unselfish kid. She played phenomenally well once she got going, and to have the effect on the offensive end that she did, I thought she was really good.”

Beyond Adika’s performance, Godlevske was able to take some positives away from the tough loss. The Bulldogs won the turnover battle, forcing 18 and only having 10 themselves. They also grabbed 12 offensive rebounds, including four from guard Upe Atosu. Godlevske also was impressed with their free throw shooting (78.6 percent), and said that he wants to see the team draw more fouls and get to the charity stripe where he knows the team can cash in.

Although it was not the ideal way to start the season, Godlevske saw growth from his team in the second half, and that’s what he was hoping for given the tough circumstances surrounding the game.

The Bulldogs have a quick turnaround, as they take on Creighton tomorrow at 4 p.m. at Hinkle Fieldhouse.