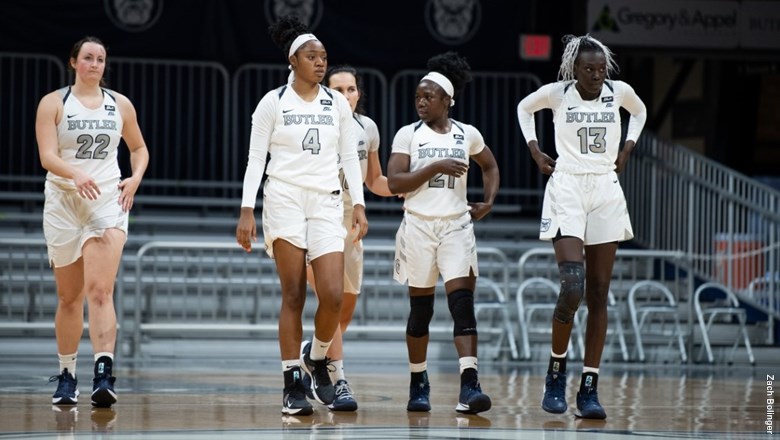 Butler women’s basketball walks up the floor during their game versus Creighton. The Bluejays topped the Bulldogs, 88-41. Photo courtesy of Butler Sports.

24 hours after their opening game, Butler women’s basketball fell to an 0-2 record after losing to Creighton 88-41. The Bluejays were able to get their first win of the season and came with a balanced attack, with five players scoring in double digits. Senior guard Upe Atosu led the Bulldogs with 11 points.

Butler had a very sloppy start, turning the ball over six times in the first three minutes. The Bluejays capitalized on those turnovers and jumped out to a 17-0 lead to start the game. Butler did not record a shot attempt in the first five minutes, and Creighton jumped out to a 27-6 lead after the first quarter.

The Bulldogs played slightly better in the second quarter, but Creighton still had a 46-18 advantage at halftime. Creighton used all 13 of their players in the first half, which was a clear advantage over Butler, who only had eight players available due to both COVID-19 quarantine and injury.

The Bluejays did not let up in the second half, and shot an impressive 44.1 percent from deep (15/34) throughout the game. They also recorded 15 steals and forced 29 Butler turnovers, turning many of them into fast break points.

This result does not paint an accurate picture of the quality that this Butler team possesses. In addition to missing five key rotational players–Jaia Alexander, Emilia Sexton, Micah Sheetz, Oumou Toure and Genesis Parker — the team has had limited opportunities to play five on five even in practice due to quarantine and injuries. Without the chance for the players to play in those game-like situations, head coach Kurt Godlevske said that the team hasn’t been able to get into game shape.

“How you get into basketball shape is by playing five on five,” Godlevske said. “You can run lines and sprints as much as you want, but until you start getting into a stance and working for 30 seconds and sprinting down the floor and stopping and changing directions all the time, that’s how you get into basketball shape and we’re far from it because of our limit in that area.”

Godlevske said that the lack of five on five means that the team hasn’t had the opportunity to watch film on themselves, which is an enormous part of the growth of the team. He will use tomorrow to go over the film of the first two games, and he hopes that will be an opportunity for the team to learn from their mistakes and grow.

Despite all the turnovers and defensive lapses, there were some positive signs on the offensive side of the ball for the Bulldogs. Godlevske liked what he saw from the team towards the end of the game.

“In the fourth quarter with all our young kids out there, I thought we did some really nice things,” Godlevske said. “We got comfortable with picking and rolling and spreading the floor and making decisions out of that. I was pretty pleased with that.”

Butler has a tough stretch coming up, with their next three games versus ranked opponents. Their next game will be their first on the road, as they head to Ann Arbor to take on 24th-ranked Michigan on Wednesday at 1 p.m.