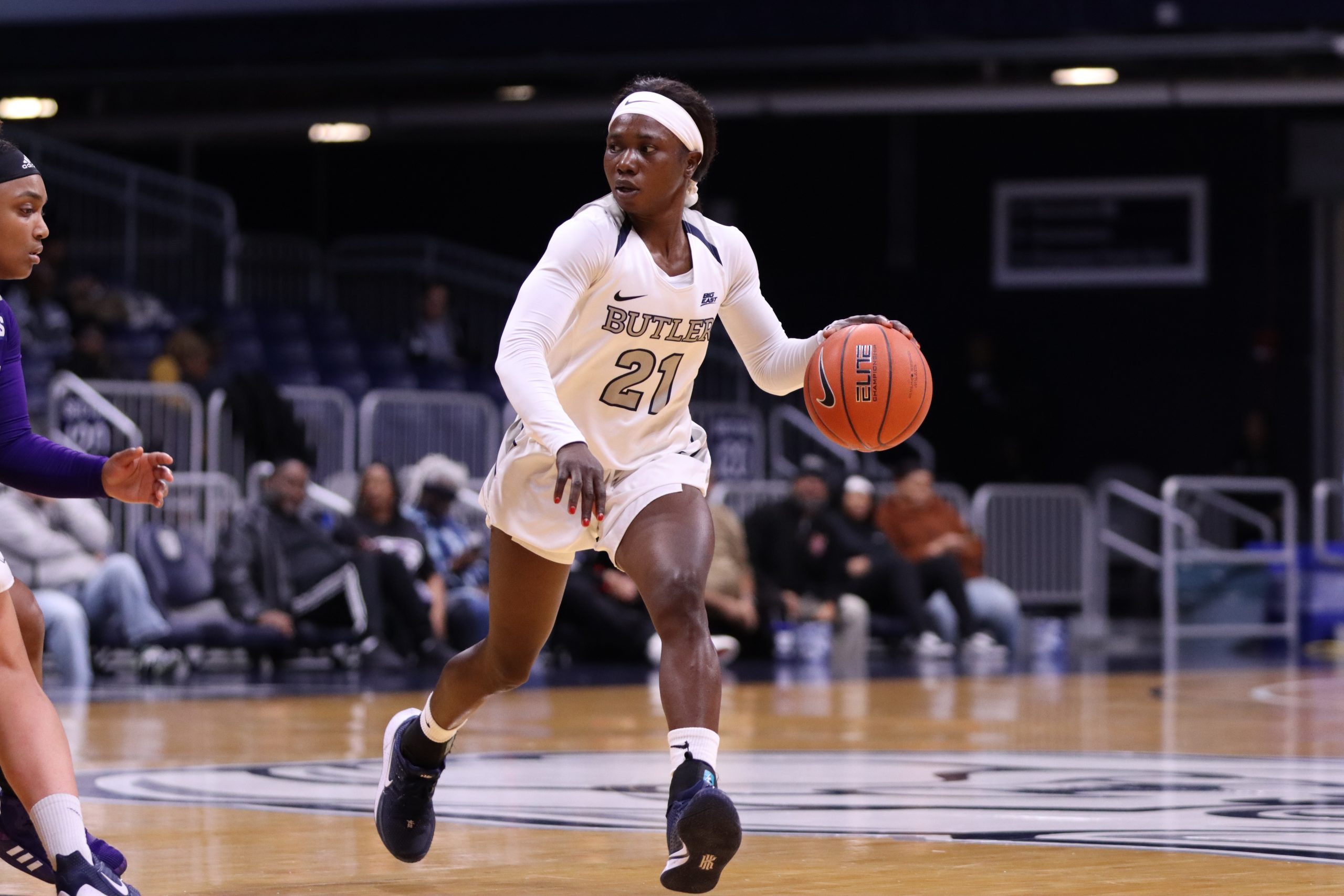 Upe Atosu drives to the paint in a game last season. Butler opens its 2020-21 campaign at home Dec 5 against Providence. Collegian file photo.

The Butler women’s basketball team is embarking on the most unusual college basketball season ever. Despite unprecedented challenges with the pandemic, as well as replacing key players from last season, the Bulldogs are ready to make some noise.

The Bulldogs will open the season on Dec. 5 at 4 p.m. at Hinkle Fieldhouse versus conference rival Providence. Because of the unusual circumstances this year, the Bulldogs don’t have any scrimmages or non-conference games to warm-up for Big East play, unlike Providence who will have five games under their belt heading into Saturday’s clash. Redshirt freshman point guard Tenley Dowell, who tore her ACL after one game last season, said that nerves will play a factor at the beginning of the season.

“These first few games, everyone will be a little nervous,” Dowell said. “I haven’t played in a whole year and some of the other girls either are new to Division I basketball or they’re freshmen or coming off injury. The first few minutes of the game could be a little rough, but once we settle in, I think we’ll be good.”

Head coach Kurt Godlevske says that although he expects nerves to play a factor in the beginning of the game, Providence has no film on this year’s team, so they will have to adjust to what Butler is doing in game.

“They have no idea who we are or what we have,” Godlevske said. ”Are we running the same stuff offensively that we did the year before? Are we doing the same things defensively? They’re going to have to make adjustments on the fly and we’re not, so it is an advantage.”

Of the 14 players on the active roster, seven of them have yet to play a game for the Bulldogs, and that doesn’t even include Dowell who played a single game last season. Three freshmen — Nyamer Diew, Rosemarie Dumont, Abby Stoddard — and four transfer players — Okako Adika, Jaia Alexander, Annilia Dawn, Micah Sheetz — are set to make their Butler debut this season.

With so much roster turnover, one might think team chemistry may be an issue. Coach Godlevske doesn’t see it that way. Instead, he sees team chemistry as a strength.

“It’s been unique, because normally at this point in time we would have done some community service projects together and team building exercises together, but [COVID-19] has restricted that,” Godlevske said. “But what the girls have done is they’ve done a terrific job of being together because COVID really forced us to be the only ones we could hang out with, especially this summer.”

Godlevske added that the NCAA made a smart move by allowing four extra hours a week — 12 total — of practice since so much time in the spring and summer had been lost. He said this extra time allowed players to better understand each other’s tendencies and strengths on the court. Still, Dowell thinks that the team will need a few games before they are fully in-sync with one another.

“There’s a lot of new faces on the team, so people have to step up and know their role, like who can shoot and who is a good post player and who can drive,” Dowel said. “We’ve definitely been working on that and trying to get familiar with each other. Hopefully after the first few games we will get in rhythm.”

Redshirt senior guard Jaia Alexander is among the new faces on the team that is set to make an immediate impact. Alexander spent her first two collegiate seasons at Clemson, and in her freshman year started all but one game for the Tigers, and had 13 games where she scored in double digits. She transferred to Butler after her sophomore season and redshirted the 2018-19 season. She suffered an injury that following summer and subsequently missed all of last season. Now, after an extended period of time off, Alexander is finally ready to play again, and she used the time off to add to her game.

“I was never a very good three-point shooter previously, so I’ve definitely put in a lot of work on that to get that more consistent,” Alexander said. “In Coach G’s system you definitely have to be versatile, you have to know how to do more than one thing, so I think it’ll fit right in with the system that he runs and I think I’ll have a lot of opportunities to show that part of my game off.”

After these long two years, Alexander is ready to finally put on that Butler jersey and play with her teammates in the historic Hinkle Fieldhouse.

“It’s just been such a long time, and I’m just excited to be out there and have that environment and to have that thrill back of being out there,” Alexander said. “I can’t wait to make moments with my teammates and make memories, get in those dog fights and hopefully pull through some wins.”

Replacing Spolyar’s scoring and Brey in the paint

If the Bulldogs are to be successful, replacing Kristen Spolyar’s 18.1 points per game is a necessity. Alexander said the whole team will need to contribute to make up for that loss.

“You can’t necessarily replace a Kristen Spolyar, but I think this year we’re going to shoot for a more balanced attack and definitely get everyone involved and move the ball,” Alexander said. “We have a lot of weapons this year from inside out, and I think once we put all those pieces together and it gets working together, I think we will definitely be able to make up for that scoring loss of Kristen.”

Godlevske echoed that sentiment, and explained that the team’s depth of talent is a major strength.

“I think that is going to be this year’s strength is just to be able to rely on eight, nine, ten players,” Godlevske said. “If somebody’s not playing well, we have the depth now to put a whole different lineup and see if that affects the game at all.”

In addition to the loss of Spolyar’s scoring, three of the top five rebounders from last season graduated — Spolyar, Brey and Strong. Similar to replacing the scoring prowess of Spolyar, Godlevske said he believes it’ll need to be a team effort on the glass. He said that it is crucial that the team sticks to what they have done the past two years on defense, and that starts with securing possession rebounds.

“It’s big in basketball to limit teams to one shot per possession, if we do fundamentally the right thing then I think we collectively have a group that can sustain what we did last year,”Godlevske said.

It would be difficult to talk about this season without mentioning the return of the University of Connecticut to the conference. Since 1995, UConn head coach Geno Auriemma has led the women’s team to a staggering 11 National Championships and 19 Final Four appearances. It is not hyperbole to say that Auriemma’s Huskies are one of the greatest dynasties in the history of sport. While their return is a challenge for the rest of the league, Alexander is excited to have the chance to play versus the storied program.

“It’s a huge challenge. At our level, every player dreams of playing the best and you can’t get better than UConn,” she said. “Especially with us having a shot at them twice, it doesn’t get any better than that.”

Godlevske believes that the addition of UConn to the Big East will help the league as a whole. He said the Big East is typically sixth in RPI, but with UConn’s consistent success, the conference may overtake one or two of the Power 5 conferences, and make the Big East an automatic two bid league for the NCAA tournament. On the court, he likes the injection of yet another play style into the conference.

“The Big East’s strength is a diversity thing. We have so many teams play so many different ways, so many different coaches coach with different styles,” Godlevske said. “Now you throw Connecticut in with talent and another play style. I just think it’s going to make our league that much stronger when it comes to NCAA tournament time or WNIT time.”

Goals for the Season

Despite all of the challenges that this season holds, the teams’ eyes remain on the prize. Coach Godlevske made his goals for the season clear: compete for the Big East regular season title, and make it to the NCAA tournament.

Although people may see these goals as a long shot for the Bulldogs, Alexander likes it that way.

“We feel really confident and we feel like we can definitely sneak up on some people,” Alexander said. “The rankings came out and we were pretty low, but that didn’t discourage us, it actually gave us a push because we feel like we can be the sleeper team every night. We’ve got the opportunity to shock some people and we can’t wait to do it.”

At the end of day, Alexander wants Butler fans to know that this team is ready to compete every game for those goals.

“One thing that we want Bulldog fans to know is that this team, we’re gonna play hard and we’re gonna be scrappy, so we’re going to be exciting to watch,” Alexander said with a smile.