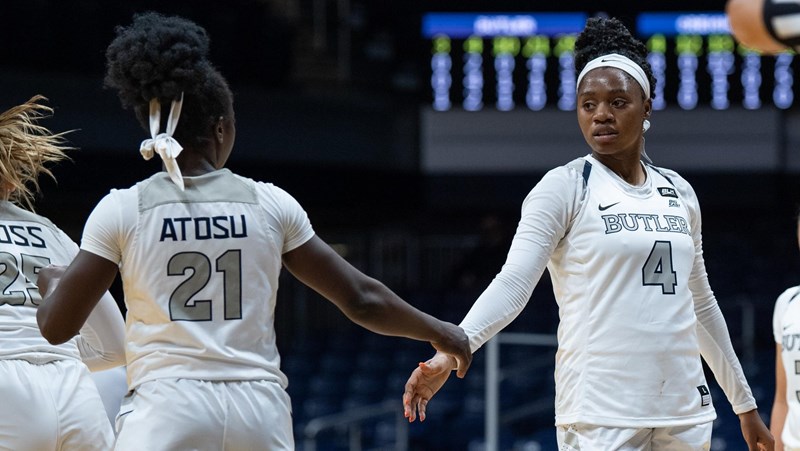 Okako Adika and Upe Atosu high-five after a play in last week’s game against Creighton. The Bulldogs, 0-3, fell to No. 19 Michigan on Wednesday while two more ranked opponents wait ahead. Photo courtesy of Butler Athletics.

The Butler Women’s Basketball team lost their third game in a row to start the season, falling to No. 19 Michigan, 93-54, in Ann Arbor. The game was the Bulldogs first on the road, as well as their first non-conference outing.

The Wolverines got off to a quick start, shutting out Butler in the first five minutes and taking a 12-0 lead. The Bulldogs were able to pick up their scoring a bit in the second quarter, but still found themselves down 49-27 after the first half. The third quarter was the most even of the game, but the Wolverines still outscored Butler, 21-17.

Butler was happy to welcome back their trio of guards who were in COVID-19 protocol in their first pair of games. Redshirt senior Jaia Alexander and junior Annilia Dawn made their Butler debuts, with Alexander starting the game and playing 25 minutes. The former Clemson Tiger finished the game with 13 points and 8 rebounds, shooting 4/15 from the field and cashing in four of her five free throw attempts. Dawn didn’t take a shot in her 11 minutes of play. Junior Emilia Sexton also appeared for the first time this season, and gave the Bulldogs much needed help from behind the arc, hitting three three-pointers in five attempts.

For the second time in three games, Okako Adika led the Bulldogs in scoring with 17 points on 5/13 shooting and 6/7 from the charity stripe. She also led all players with 32 minutes of playing time, which is an indication of how much head coach Kurt Godlevske trusts the junior college transfer.

One positive for the game was the much better turnover differential compared to last game. After turning the ball 29 times on Sunday to Creighton, the Bulldogs played far less sloppy, turning the ball over 15 times. They also forced 16 Michigan turnovers, marking the second game this season they have won the turnover battle.

The Bulldogs season is going to get harder before it gets easier, as they play No. 15 Indiana this Sunday in Bloomington. They will have a quick turnaround after that tough matchup where they will travel to Connecticut to play the third-ranked Huskies for the first time since their return to the Big East. This marks the first time in Butler Women’s basketball history that the Bulldogs will play three straight nationally ranked opponents, not to mention that all three games are on the road.

The new AP Poll has Michigan at #19, Indiana at #15, and UConn at #3. Butler has never faced three-straight ranked opponents before this season.