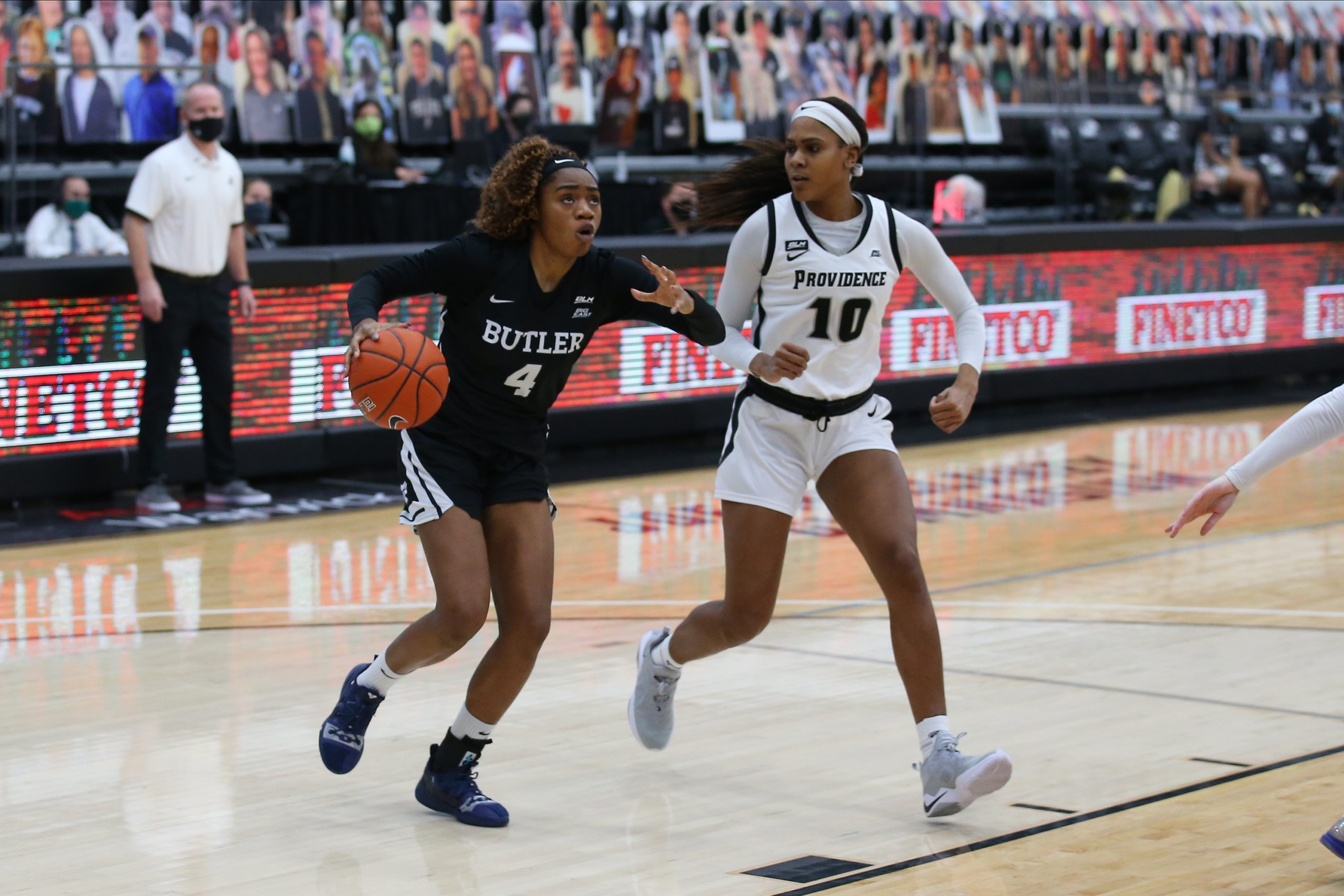 Okako Adika drives around a Providence defender during Thursday’s loss. Adika led the Bulldogs with 14 points and six rebounds. Photo by Christian Bates.

The Butler women’s basketball team lost their first game of the new year to Providence, 62-50, in a rematch of the Bulldogs first game of the season. Butler falls to 0-5 on the season — 0-4 in the Big East. Junior forward Okako Adika led Butler with 14 points and six rebounds, and senior guard Chanell Williams led the Friars with 16 points and eight rebounds.

This game was initially scheduled to be a home game versus nationally ranked DePaul, but the Big East announced on Jan. 6 that the DePaul game would be postponed and Butler’s road contest versus Providence, originally scheduled for February 24, would be moved to today. This meant both teams had little time to prepare for the game, and made it even more difficult for the Bulldogs because they had to travel to Rhode Island when they were planning on playing at home.

The Bulldogs got off to a slow start, as Providence played stellar defense for the first five minutes of the contest and took an early 8-0 lead. Freshman forward Nyamer Diew broke the scoring drought for Butler on a scoop layup with four minutes to play in the first.

The Friars kept their foot on the gas pedal, scoring immediately after Diew’s bucket, and proceeded to go on a 9-0 run in the next two minutes, capped off by a wide open three from Williams. Freshman center Rosemarie Dumont was able to end the Friars scoring run with a second chance layup, and Butler held the Friars scoreless for the rest of the quarter, ending the first frame down, 17-4.

Junior Ellen Ross opened the scoring in the second quarter on the first possession for the Bulldogs, and senior Micah Sheetz hit a pull-up jumper on their next possession to match their scoring output in the first quarter in the first minute of the second. Following a layup by Providence star forward Mary Baskerville, Butler’s leading scorer Adika hit a 3-pointer to cut the Friar lead to 10. The Friars hit a shot on the other end, and a couple possessions later Adika hit another three from the same spot as her first.

On the next possession, senior guard Jaia Alexander attacked the baseline and hit a contested layup in her first game in almost a month. After Baskerville made one of her two shots from the line on the next possession to extend the Providence lead to eight, Alexander hit a tough layup over Baskerville on the other end. The Bulldogs forced a Friar shot clock violation on their next possession, and Alexander showed great vision and found senior guard Upe Atosu in the left corner, and Atosu swished a 3-pointer to cut the Providence lead down to one possession.

Providence was able to dominate the rest of the quarter, going on a 10-2 run in the final three and a half minutes of the first half to take a 34-23 lead into the break. The lone Bulldog points came from Diew on the free throw line.

The Friars opened up the scoring in the second half with a wide open layup and Williams hitting one of two from the charity stripe. Adika hit her third three of the game to open up the second half scoring for Butler. Providence extended their lead to 16 on a fast-break floater from Williams, but not long after, senior guard Genesis Parker–who made her first appearance of the season today–drove through the middle of the Friar defense and made a layup. On the next possession, Sheetz found junior Annilia Dawn in the corner who knocked down a three and cut the Friar lead to 11.

The two teams held each other scoreless for the next two minutes, before Providence converted an and-one. On the next Bulldog possession, after multiple offensive rebounds by Adika, Parker found an open Atosu in the corner who hit her second three of the game. The Friars scored the final two buckets of the third quarter and led 49-34 heading into the fourth.

Atosu hit two free throws to open up the fourth quarter, and the Friars responded with two buckets over the next two minutes to extend their lead to 17. With seven minutes to play, Diew cleaned up the offensive glass after a Sheetz miss and made a layup to cash in the second-chance points. On the next Butler possession, Parker hit a three from the top of the key to cut deeper into the Friar lead.

Following a few misses from both teams and a short jumper from the Friars, Parker hit a stepback three in the face of the Friar defense to cut the lead down to 11 with five minutes to play. About a minute of game time later, Adika scored a second chance layup to cut the lead to nine, but that was the closest the game would get. Adika hit her fourth three of the day with under a minute left, and Parker went one of two from the line, finalizing the score at 62-50.

The Bulldogs played much better in this game compared to the opening game of the season versus Providence, but there is still work to be done. It was a great addition to have Genesis Parker back on the floor, and after playing with only seven players in their last contest on New Year’s Eve, Butler played 11 different players today. Having this depth at his disposal, which prior to the season head coach Kurt Godlevske noted was one of the biggest strengths of the team, will be key for the Bulldogs to start winning games.

Butler’s next game is this Saturday, Jan. 9 versus St. John’s in Queens at 2 p.m.