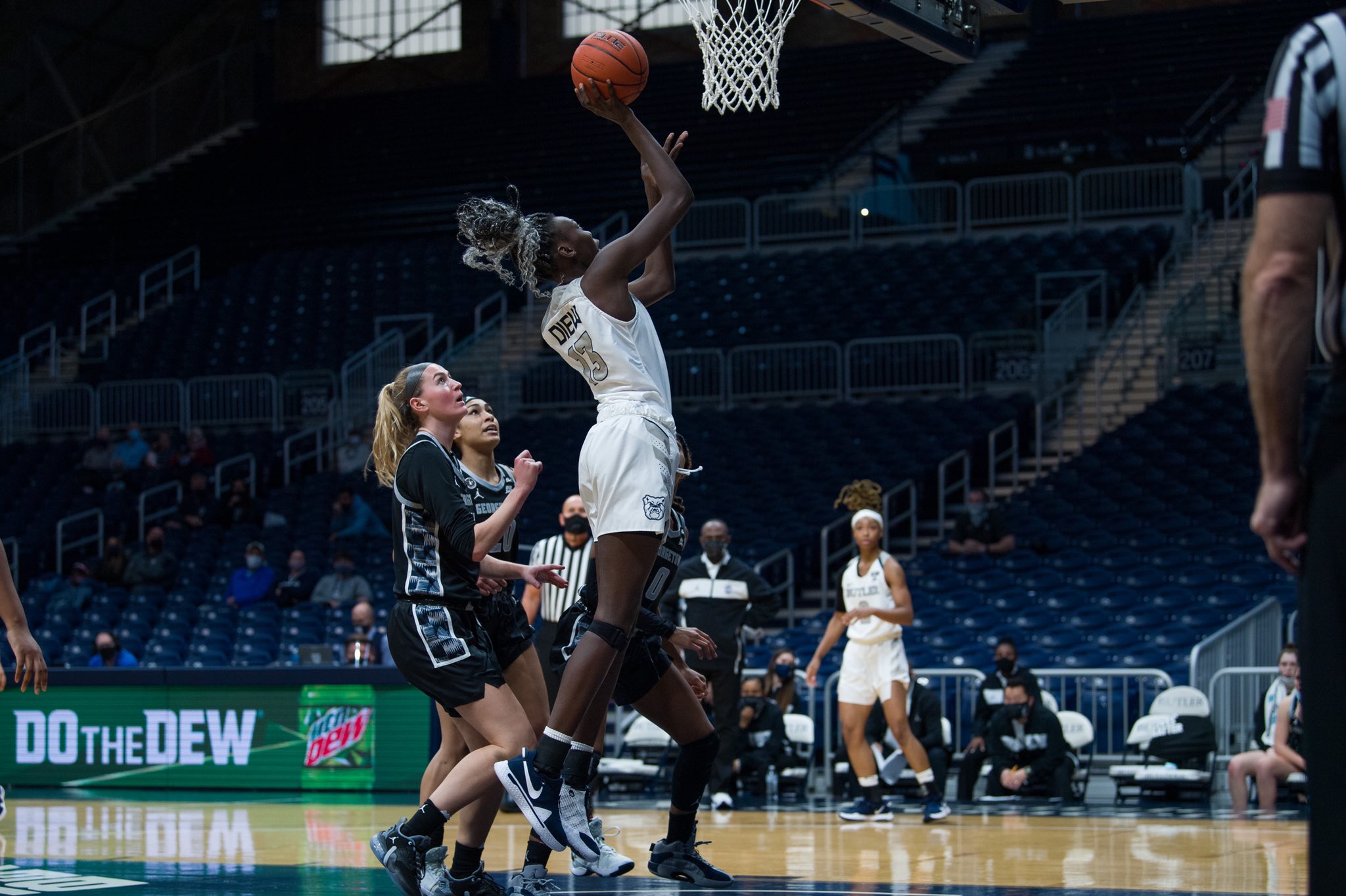 Butler’s Nyamer Diew converts a layup in the Bulldogs’ 58-40 win over Georgetown. Wednesday’s victory was Butler’s first of the season. Photo by Butler Women’s Basketball on Twitter.

Head coach Kurt Godlevske was impressed with Parker’s performance, and likened her to some of Butler’s best players in his tenure leading this program.

“She brings a different dimension to us,” Godlevske said. “She stuffed the stat sheet and is becoming a nice all-around player, kind of like the players that we’ve had the past couple years like Whit Jennings, (Kristen) Sployar and (Tori) Schickel, they did things that help you win besides just score.”

This was only Georgetown’s third game of the season due to COVID-19 shutdowns, with their sole win coming on New Year’s Eve versus the Bulldogs. This was Butler’s fourth-consecutive game with the same starting five of Parker, Adika, Micah Sheetz, Upe Atosu and Jaia Alexander. Head coach Kurt Godlevske said he likes the experience that the lineup gives him, as he is starting four seniors and one junior. He also likes the varying play styles that those five players have.

“There’s a lot of diversity in how they like to score, with a lot of different offensive strengths,” Godlevske said. “And defensively, they can really get out and pressure the basketball and they’ve got some real intelligence about them, and they’re starting to grow in that area which is fun for me as a coach to teach that part of it.”

To start off the game, Butler’s leading scorer Okako Adika hit a layup through traffic on the Bulldogs first possession of the game. Two possessions later, Parker found a cutting Sheetz under the basket to give Butler an early 4-0 lead.

About four minutes into the game, Parker hit back-to-back threes, and a minute later, freshman point guard Tenley Dowell splashed in a three of her own to extend the Bulldog lead to 13-0. Butler’s defense held strong for the first five and a half minutes, forcing the Hoyas to miss their first nine shots before they finally broke through with a 3-pointer with just over four minutes to play in the first quarter.

A minute later, freshman forward Nyamer Diew grabbed an offensive rebound and passed it out to reset the Bulldogs offense. She then set a screen for Adika, rolled to the rim and got an easy two points. Following a second chance bucket for the Hoyas, Parker showed off her speed driving to the rim and hit a nice layup to bring her total up to eight points early in the game. In the last two minutes, both Adika and Jaia Alexander went one of two from the free throw line, which gave Butler a commanding 19-5 lead after one period.

The Hoyas came out stronger in the second, scoring the first two buckets of the quarter and cutting into the Bulldog lead. After the second bucket, Adika found Sheetz in the corner, and her head fake made the Hoya defender jump, and she dribbled once to her right and hit a smooth pullup jumper to extend Butler’s lead to 12. One Georgetown free throw was the only point the Hoyas could manage for over five minutes as the Bulldogs went on a 6-0 run. Atosu, Diew and Adika all made layups over that long defensive stand, extending the Bulldog lead to 17 points.

The Hoyas eventually broke through with a 3-pointer from Milan Bolden-Morris, and then followed that up with a Yasmin Ott layup with a minute left to cut the lead back to 12. Butler came right back, however, with a Parker free throw, and then right after Atosu stole the ball at halfcourt and took it the rest of the way for a layup as she got fouled. Atosu — an excellent free throw shooter — hit her shot from the line and gave Butler a 31-15 lead at the half.

Butler forced the Hoyas to shoot just 17.6 percent from the field in the first half. It was an impressive defensive performance from the Bulldogs, as they weren’t allowing the Hoyas to get into the paint and forced 10 turnovers. The Bulldogs’ stellar defense forced Georgetown to take a lot of threes, a shot that wouldn’t fall for them — they shot an uninspiring 2/16 from behind the arc in the first half.

The Hoyas opened up the second half with a basket, and after two scoreless minutes for the Bulldogs, Adika came into the game and hit a corner three. The following possession after an Atosu offensive board, Butler had a beautiful possession, passing the ball around the perimeter to every player on the court, before Adika found an open Alexander under the basket for two.

On the next Georgetown possession, Atosu grabbed her fourth steal of the game and took it to the other end, scoring on the fast break. Parker hit one of her two free throws the following possession, extending the Bulldog lead to 22 — their largest lead so far this season.

Over a minute later, Georgetown ended their four-minute scoring drought with Bolden-Morris’s second three of the game. Two Sheetz free throws were nullified by a Jillian Archer layup for Georgetown, but Adika hit her second three of the game immediately after to extend Butler’s lead back to 22. The Hoyas scored two buckets in the final minute of the third, but the Bulldogs still held a 44-26 advantage, ten minutes away from their first win of the season.

After two minutes of scoreless basketball, Adika drove to the hoop, making her layup and extending Butler’s lead to 20. The Hoyas scored on their next two possessions, but a Parker layup in between those buckets kept Butler’s lead to 18 with seven and a half minutes to play. The Bulldogs were unable to score over the next three minutes, in part due to the Hoyas utilizing the full-court press, but Georgetown wasn’t able to take advantage of it, only scoring four points over that stretch and cutting their deficit down to 14 with four minutes to play.

After head coach Kurt Godlevske called a timeout as Butler’s shot clock wound down to two seconds, Sheetz banked in a 3-pointer off the in-bounds pass to extend Butler’s lead to 51-34, a virtually insurmountable lead with three and a half minutes to play. After two Hoya free throws, Butler scored five straight points, three from Parker and two from Sheetz, to get their lead back up to 20. With one minute left, Adika made a great pass to find Alexander under the basket, who hit her layup to give Butler a 58-40 win over their conference rival.

Butler’s defense was the difference in this game: they held Georgetown to 23 percent shooting from the field, 10 percent from three, and forced 19 turnovers. Coach Godlevske said he had seen signs of this in their past few games, but the team finally put together a complete performance.

“This is our first time probably in this run of games where we put together 40 minutes,” he said. “Tonight, for the most part, we had a real consistent approach to the game, which is a real credit to the kids’ work ethic, discipline and positive thinking. It’s hard to go through what we went through, but they understand that it’s a challenge with all the COVID issues we’ve had.”

Godlevske and the Bulldogs hope to build off of this win this Sunday, Jan. 17, when they travel to Seton Hall to take on the Pirates at 1 p.m.