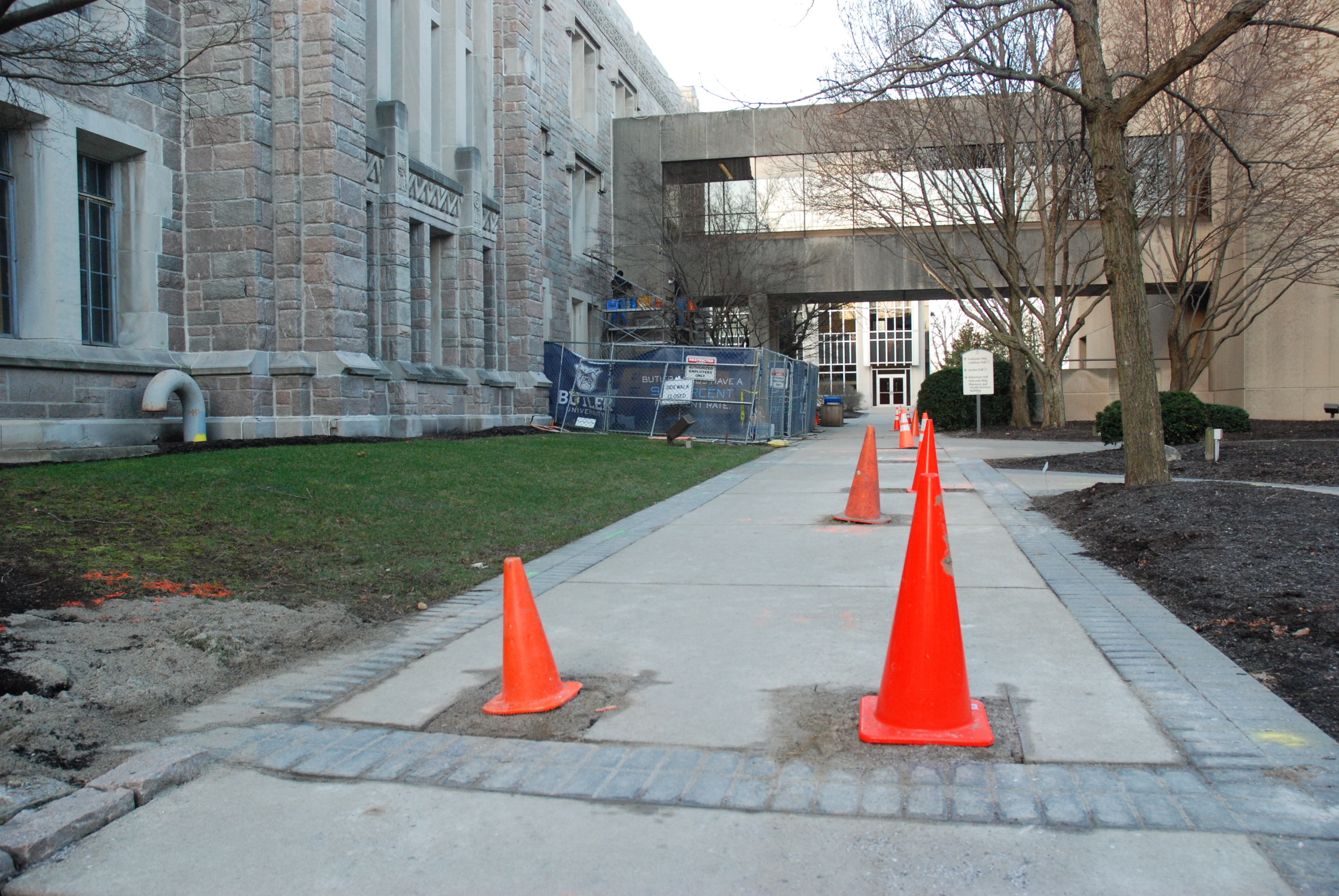 A project visible to students on the Atherton Mall began around two to three weeks ago as part of a master utility plan to continue development of telecommunication and electrical enhancements at Butler University.

A machine digs underground to create tunnels for 100 foot long plastic pipelines that will carry electrical wiring throughout campus.

The master plan contains three main phases: the South Loop, North Loop and Central Loop. Construction is now on the South Loop that spreads from Butler Way to South Hampton. The goal is to have the South Loop phase completed by this spring’s graduation, Rich Michal, executive director of facilities said.

Michal has experienced two major power outages since he started working at Butler six years ago. The new plan that started two years ago will connect each building to a single circuit to prevent widespread outages.

“You may not see a difference,” Michal said. “But when we have an outage, it won’t be for as long.”

The current fenced-in area on the Mall holds a “duct bank,” and is the center for electrical conduits, which is tubing used to protect electrical wiring. Tunnels connect the wires and pipelines to a station by the Fairbanks Center. Jordan Hall is a sensitive area because of student traffic, so they did not want to build an open trench, Michal said.

The underground plan will isolate buildings to single circuits. Multiple buildings share circuits now. For example, ResCo and Clowes Memorial Hall connect to the same circuit. If power goes out at one building, the other building will also lose power.

Jarrod Koester, first-year Liberal Arts and Sciences senator, said he was briefly notified of the construction. He heard the project centered around pipelines. The construction did not inconvenience him personally because he enters through a side door of Jordan Hall, but many of Koester’s constituents told him about the disruptive construction.

“There are probably a lot of people who aren’t too happy because they just finished construction, and now they’re starting construction again,” Koester said.

The construction around campus causes noise. Madison Miyake, first-year pre-PA major, had her first year seminar class moved into the basement of Jordan Hall because of the loud construction.

“The construction noise was a little disruptive when we discussed in class,” Miyake said. “The noise was annoying and distracting.”

The electrical construction plan will continue for around two more years. A large piece was completed by Clarendon Road during the summer of 2015. A similar piece from the Alpha Phi house to the Fairbanks Center was done last summer. These projects were done with open trenches, while the current loops are underground.

“We want you to see as little of it as possible,” Michal said.

The old electrical system contained brick vaults and giant conductors carrying large volts of electricity. During Halloween of 2014, water shorted the system because the insulators wore off. The shortage caused a power outage at ResCo for an entire weekend. The new looping plan will reduce major outages throughout campus because of the updates.

After the looping plan is completed, the buildings will be switched one-by-one to the new system. These upcoming changes depend on when the new substation, a part of the electrical generation and distribution center, is completed. Major changes will occur when construction concludes and all buildings’ substations can relocate.

Electrical wiring and construction will carry into the summer, especially over the Fourth of July weekend, when many students and faculty are not on campus. If the construction stays on track, the next phase of electrical changes will start next semester.