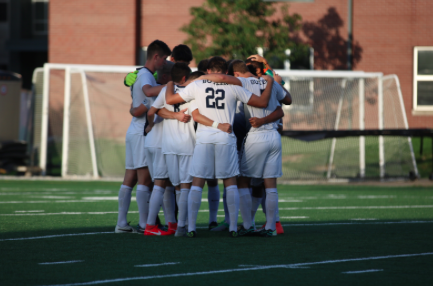 Typically it takes a long time for a team to come together. The Butler Men’s Soccer team does not. The Bulldogs welcomed Southern Illinois University Edwardsville to the Butler Bowl, and right from the start did not take their foot off the gas pedal, defeating them 2-0.

The Dawgs began their assault early, firing off 4 shots within the first 15 minutes of the game. The Bulldogs pushed the ball hard, led by freshman Isaac Galliford and junior Eric Leonard.

The first goal of the night was scored by Galliford in the 27th minute of the game. It was on the third of three straight corner kicks by the Bulldogs. This was the first goal for the freshman on the season and in a Butler uniform.

After the game Galliford was ecstatic about his first goal,

“I was lucky,” he said. “I got the bounce off the ricochet, was able to put my head down and get a good shot off. I was delighted to get my first goal.”

The difference at the half… pic.twitter.com/4K2h5QgJLK

The score would stay at 1-0 throughout the rest of the half with Butler dominating the play of the game, and outshooting the visiting cougars 13-3, putting three of those shots on goal. Galliford led the charge with five shots and the one goal of the half.

Despite the fast paced play of the cougars in the second half, the Dawgs held off attempt after attempt by the Cougars. The second half was as a s close as it could get. The bulldogs once again outshot the Cougars, but this time only by a slim 5-4 margin. The game would get chippy as time ticked down, especially for the visitor, who committed 11 fouls in the second 45 minutes.

The scariest moment of the game came in the 87th minute, when Cougar forward Mohamed Awad took a shot from about 15 yards out that nearly went in for the equalizing goal. Fortunately for the Bulldogs the ball soared just a shade over the net and kept the score at 1-0, but not for long.

On the Dawgs next possession, they would make it a 2-0 game thanks to a goal scored by Marco Charalambous in the 88th minute.

2-0 was the final on a gorgeous Friday night at the Butler Bowl, a game head coach Paul Snape was thrilled about.

“I thought we were really sharp tonight, one of the best performances i’ve ever seen here at Butler,” Snape said.

The final numbers were nearly all in favor of Butler. Shots, fouls, shots on goal and goals all favored the Bulldogs.

Snape is adamant that the team can use this win to motivate them as they travel to Akron, Ohio, next week to take on UC Santa Barbara and Oregon State in tournament play.

“What is really pleasing about tonight is we shutout a very good team,” Snape said. “This is a game we can build on going forward.”

After a tie to start the season, Butler has now won back to back games and has improved their record to 2-0-1. It will be 15 days until the men’s soccer team is back in the Butler Bowl when they take on the Aces from the University of Evansville on Sept. 20.