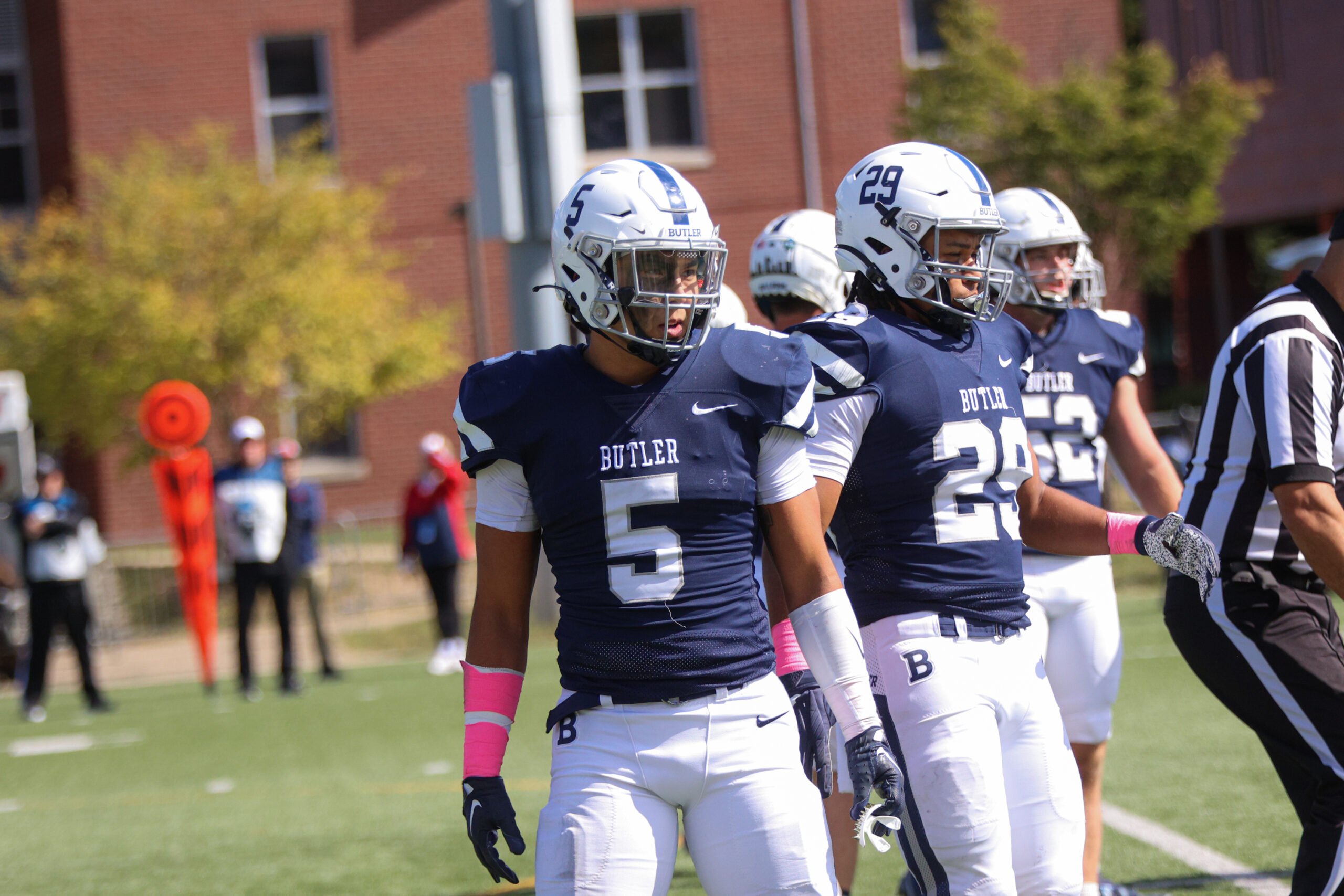 Redshirt senior defensive back Connor Reid looks to the sideline during Butler’s 31-0 win against Dayton. Photo by Claire Runkel.

The women’s basketball team will tip off against Chicago State at 7 p.m. at Hinkle Fieldhouse in their first regular season game of the year. The Bulldogs outscored Benedictine 86-31 to collect an exhibition win on Nov. 6. The game will be streamed on FloSports and Butler+.

The men’s soccer team will travel to Boyds, Md., to face Georgetown in the semifinals of the Big East Championship.The Bulldogs are coming off a 3-0 win against Providence in which first-year forward Palmer Ault scored a brace to lead the Dawgs to the victory. In their only meeting against Georgetown this season, the Bulldogs lost a close game, 3-2. The semifinal match is set to begin at 7 p.m. and fans will be able to watch the game live on either FloSports or BEDN.

The men’s cross country team will travel to Terre Haute, Ind., to begin their race to earn a spot in the NCAA Championships. The team is coming off a successful performance by graduate student Barry Keane, who won the Big East individual title by six seconds last Saturday. The NCAA Great Lakes Regionals will be held at the LaVern Gibson Championship Cross Country Course and is set to begin at 11 a.m.

The women’s cross country team will also head to Terre Haute, Indiana, to compete in the NCAA Great Lakes Regionals. The women’s race will commence at 10 a.m. EST. one hour before the men. Senior Mia Beckham led the way for the Bulldogs last Saturday at the Big East Championship with an eighth-place finish.

The football team will travel to Drake for a Bulldog faceoff at 2 p.m. EST. Butler is coming off an exciting 56 yard game-winning field goal from redshirt senior Luka Zurak against San Diego last Saturday. The Bulldogs are 7-2 overall and 5-1 in conference play. Drake will be Butler’s final contest on the road of the regular season.

The women’s volleyball team will head to Villanova for their second matchup of the season. The game is set to begin at 7 p.m. EST. This past weekend, the Bulldogs went 1-1 in conference play, falling to St. John’s 3-0, but rebounding with a solid 3-0 win over Seton Hall. Butler is now 13-13 and 7-7 in the Big East. In their first match-up on Oct. 9, Butler beat the Wildcats 3-1.

The women’s volleyball team will travel to Georgetown and face the Hoyas for the final away game of their regular season play. The match is set to start at 1 p.m. EST. Butler took down the Hoyas 3-1 in their previous matchup on Oct. 7.

The women’s basketball team will take on the IUPUI Jaguars at Hinkle Fieldhouse. Having spent 12 seasons as the head coach of the Jaguars, and becoming the all-time winningest coach for IUPUI, Coach Parkinson will now trade his crimson red polo for Butler blue and lead the Bulldogs against his former team for the first time. Tip-off is set for 2 p.m. EST.

The men’s basketball team will head to University Park, Pa., to face the Nittany Lions on their home court. The game is part of the annual Gavitt Tip-Off Games between the Big East and the Big Ten conferences. The Bulldogs started their regular season 1-0 after their big win against New Orleans, 89-53. Fans can tune in to the matchup on FS1, with tip-off set for 8:30 p.m.