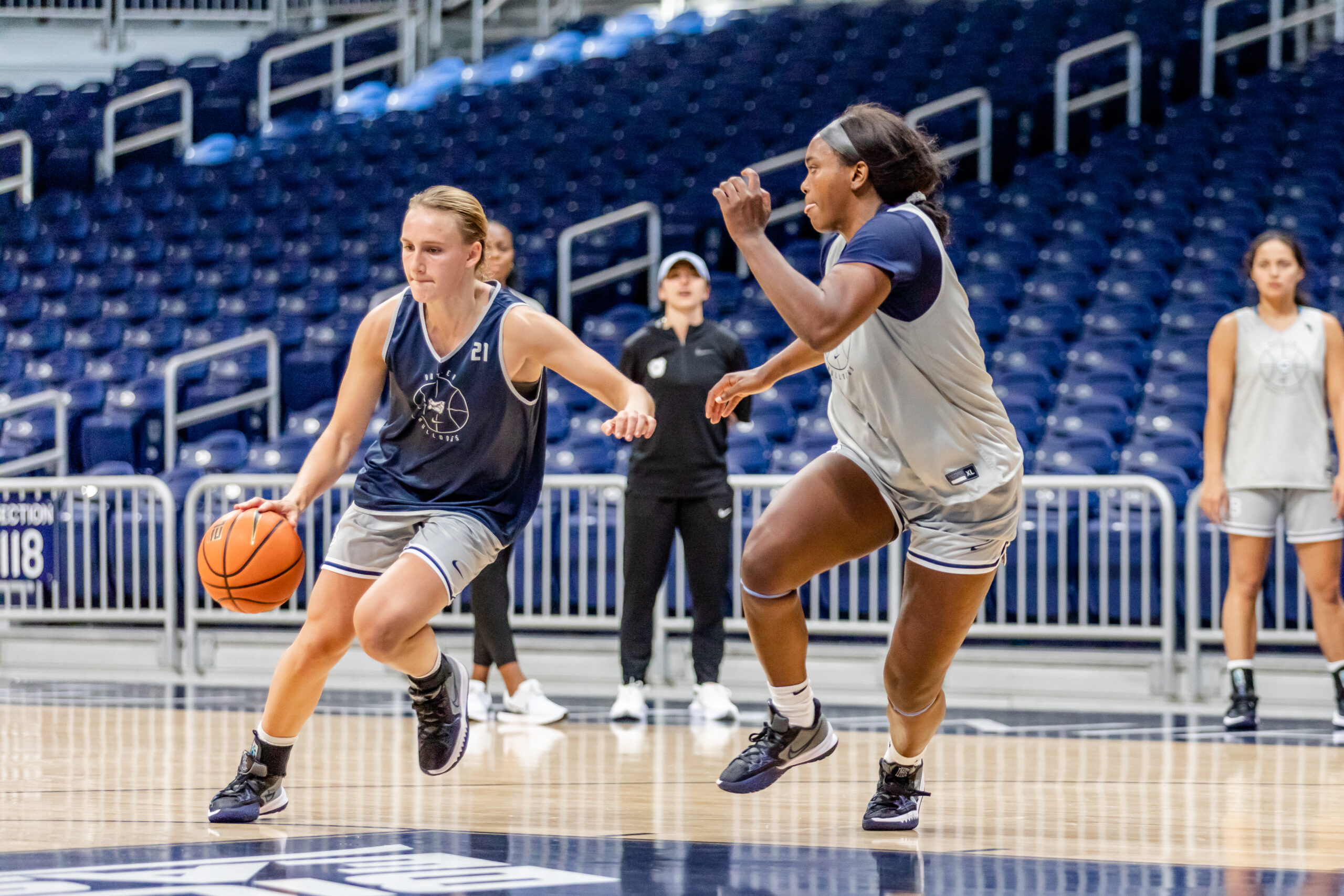 The Butler women’s basketball team won big in their first exhibition game of the season against Benedictine 86-31 on Nov. 5. Every active player on the roster made it onto the court and 12 different Bulldogs scored. Let’s go beyond the box score into Butler’s first action this season.

Head coach Austin Parkinson did not give any clues as to what the starting lineup would look like before game day and with all the new additions to the team it was going to look different from last year. Sophomores Sydney Jaynes and Trinity White were the only returners to start. They lined up alongside junior forward Anna Mortag, graduate student guard Shay Frederick and first-year guard Jordan Meulemans.

Help from everyone on offense

With the game being an exhibition match it was not surprising that Parkinson tried different combinations on the floor and got everyone out there. The leading scorer for the Bulldogs came off the bench in junior guard Caroline Strande who put up 17 points in 17 minutes along with going 6-6 at the free throw line.

Strande’s performance helped settle the offense down after the team only scored nine points in the first quarter. Her ability to attack the basket and knock down open jumpers allowed the rest of the Butler offense to get on a roll.

Parkinson was pleased with the team’s effort and production during their first game.

“Our defense really stepped up, we moved the ball pretty well and it was nice to get a lot of people in the game,” Parkinson said. “You know we had 19 assists so once we start sharing the ball, we start to score in transition. It was a really positive first game for our program.”

Along with the 19 assists the offense produced as a whole, the Bulldogs shot 48.5% from the field, a statistic that failed to stay consistent last season.

With the team only having seven returners compared to eight newly added players, it was important to get everyone out there and gain experience together as a team.

Butler stepped up on the defensive side to shut down Benedictine. After giving up 16 points in the first quarter, the Dawgs settled in on defense and held Benedictine to 15 points for the rest of the game. In the third quarter, the Dawgs’ stifling defense held the Eagles scoreless in an impressive defensive effort. The Bulldogs produced 38 points off of 15 turnovers as a team. They held the Eagles to 22.6% from the field and 22.2% from behind the arc. Junior Kendall Wingler led the defense with three steals and junior Rosemarie Dumont led the team with six total rebounds.

The Bulldogs will face Chicago State on Wednesday, Nov. 9 at Hinkle Fieldhouse for their regular season opener.